The Chiropractic Awareness Council’s Spring Conference 2007 was a hit among participants, since fully 100 per cent of them said they would be back next year for the tenth anniversary. Sixty-four percent indicated on the exit poll that their expectations had been exceeded, while 32 per cent had them met. All of the respondents claimed they would recommend the annual professional and personal growth event to a friend.

Staged May 4 to 6 at the Delta Meadowvale Resort in Mississauga, Ontario, the conference’s program was set against a background that included golf, a wine and cheese reception, the winemakers dinner, and the WoW kids club celebration.

A practising chiropractor with a master’s degree in philosophy, Dr. Senzon drew the audience into the profession’s early history and philosophical heritage, shedding insight into the persona of both the founder D.D. Palmer and his son, B.J Palmer. With an easy storytelling technique, Senzon showed how chiropractic developed historically alongside models of early medicine, spiritualism and psychology. 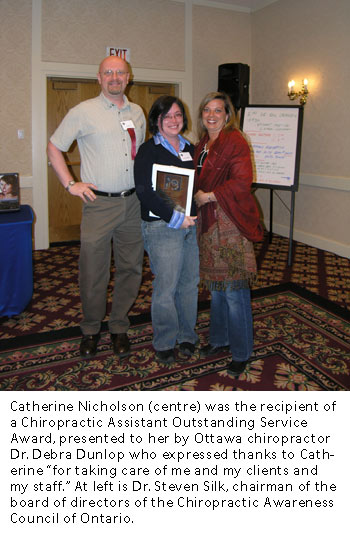