He is a living treasure within the Canadian chiropractic community. In a teaching career spanning over 57 years, Dr. Herbert K. Lee taught thousands of chiropractors-to-be, and he has some advice for them yet. “I’d like to see chiropractors spend adequate time in preparation for the adjustment by reducing hypertonicity in the surrounding musculature,” says Dr. Lee. “Then, after making the adjustment, palpate for improvement in mobility and tension … and if you improve that, you’ve done a good job.”

Soft tissue work has always been important to Dr. Lee. But he notes that B.J. Palmer, who favoured a one-thrust adjustment, felt strongly that any other interventions diluted the purity of chiropractic. Not long after setting up in practice, Dr. Lee was called upon to introduce B.J. Palmer at a lecture that he had been invited to give at the Eaton’s College Street auditorium. “He got up and read his speech in a monotone,” recalls Dr. Lee for whom the occasion was a bit of a letdown.

Always seeing himself as a full-time practitioner and a part-time instructor, Dr. Lee is known for the dedication with which he served his patients, who followed him to his three locations in the Bloor and Yonge area of downtown Toronto – from 2 Bloor St. East, second floor, to 636 Church St., to post-hippy, upscale Yorkville Avenue.

“I’ve never considered myself an intellectual,” Dr. Lee says, though the record shows that he has certainly been a worker for the development of his profession. Some of the roles he has assumed include: executive member of the Ontario Chiropractic Association (OCA); secretary-treasurer of the board of governors of the Canadian Memorial Chiropractic College (CMCC); founding member and president of CMCC’s Governors’ Club; secretary and later president of the Association for the History of Chiropractic (AHC). Some of his many awards include: OCA chiropractor of the year, 1961; fellow of the International College of Chiropractors, 1963; Professor Emeritus, CMCC, 1976; the Canadian Chiropractic Association (CCA) medal of merit, 1988; the AHC’s Lee-Homewood Chiropractic Heritage Award, 1994.

THE BIRTH OF A COLLEGE
In 1945, when the CCA’s predecessor, known as the Dominion Council of Canadian Chiropractors, decided that a school should be re-established in this country (the last one, the Toronto College of Chiropractic, had closed in 1927), Dr. Lee served as secretary-treasurer in the effort that culminated in the birth of CMCC.

The first class, comprised mainly of newly discharged war vets, assembled in the former Meadonia Hotel at 252 Bloor St. West, which had been purchased and extensively renovated to suit its latest incarnation. When the instructor who had been designated to orient the students failed to show up, Dr. Lee stepped in to describe the anatomy of the spine. That was September 18, 1945, half a century after D.D. Palmer was thought to have administered the historic first chiropractic adjustment.

Writing in the Journal of the Canadian Chiropractic Association, Dr. Brown said: “As a lecturer, Dr. Lee stressed the importance of developing the finesse required to deliver a specific, controlled adjustive thrust necessary to obtain a clean joint release. He then demonstrated the post-adjustive procedures of static and motion palpation to ensure the correction was accomplished. Dr. Lee always conveyed to his students the practical experience he gained from his many years of attending to patients in pain.”(1)

The H.K. Lee Walk-In Clinic at CMCC’s new Leslie Street location near the northern boundary of the city is named in Dr. Lee’s honour. Indeed, he has been actively associated with each of the three successive campuses. As the college was preparing to relocate to its Bayiew site in 1968, he says there was some questioning along the lines of “Why are we going so far north?”

‘I have had the good fortune to have known Dr. Lee since 1951. I have found him to be a kind and patient teacher, competent and ethical colleague, reliable and willing co-worker and a loyal and compassionate friend. For 80 years, Herb has been a marvelous example of gracious manners and good health. He is always courteous, even when provoked, and has never missed a day of work from illness or injury.’
—Dr. Douglas Brown, “Herbert K. Lee: An Accomplished Professional,” Journal of the Canadian Chiropractic Association, September 1990 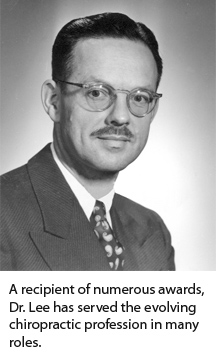 SURVIVAL AN ACCOMPLISHMENT
In a 1985 interview, Dr. Lee was quoted as saying, “CMCC’s greatest accomplishment has been its survival. When we talked about starting a school, people said it couldn’t be done. When the school opened, people said it would never last. I would like to see the looks on their faces now! Watching the school flourish and grow has been extremely satisfying to me.”(2)

A little over eight decades ago, Dr. Lee graduated from Peterborough Collegiate Institute and took a clerking job in his hometown with the Western Clock Company, later known as Westclox. At the height of the Depression, faced with a 10-per-cent salary cut, he made the move to Toronto where he was employed for seven years in the Manufacturers Life Insurance head office. Perhaps inspired by the skills of his chiropractor at the time, Dr. Herbert Hill, the young man applied to the National College of Chiropractic in Chicago, where mobster Al Capone was still eluding the law.

Choosing chiropractic was the best decision he ever made, says Dr. Lee, who retains his legendary optimism and his sense of humour. Though in 1990 he lost his wife, Margaret, he is surrounded by a loving family – two daughters, three grandchildren and four great-grandchildren. He still summons the energy for a daily 45-minute walk through the residential urban landscape.     Dr. Lee’s enthusiasm for the future of chiropractic has not diminished. While cautioning that “we don’t have all the answers,” he is nevertheless certain that “the more people turn to chiropractic for results that medicine hasn’t been able to give them, the stronger we are.”•