News
A new approach to peripheral nerve injury? Natural killer cells in the immune system could present a target 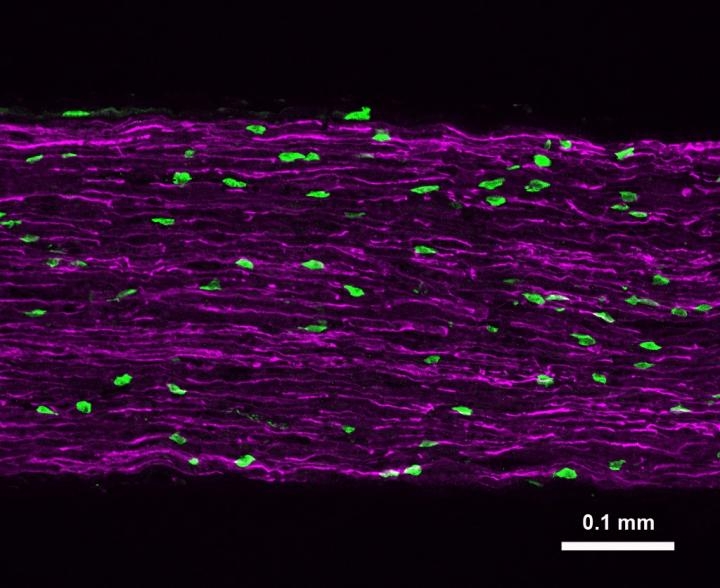 In animal models of a totally crushed peripheral nerve, the damaged axons are broken down, allowing healthy ones to regrow. But humans rarely suffer complete axonal damage. Instead, axons tend to be partially damaged, causing neuropathic pain — a difficult-to-treat, chronic pain associated with nerve trauma, chemotherapy and diabetes. A new study in Cell, led by Michael Costigan, PhD, at Boston Children’s Hospital, explore the role of immune cells in breaking down damaged nerves. The findings may change our understanding of neuropathic pain and how to treat it.

Targeted destruction
Early in their work, Costigan’s collaborators in Seoul, South Korea, noticed that immune cells called natural killer (NK) cells would strip away the axons of neurons in a petri dish. NK cells are part of our body’s rapid, innate immune response to threats such as viruses and cancer.

The team then started growing sensory neurons in a petri dish. They noticed these dissociated neurons began expressing large amounts of RAE1, a protein that invites NK cells to attack. When these neurons were co-cultured with activated NK cells, the NK cells began breaking down the injured nerves.

“We found that the natural killer cells would eat away at the axons of the neurons, but wouldn’t destroy their cell bodies,” says Costigan, co-senior author on the Cell paper with Seog Bae Oh, PhD, of Seoul National University. “This which was exciting as it allowed for the possibility that new, healthy axons could grow from them.”

Watching immune cells and neurons interact in live mice
The team then looked to see whether these results held up in a living animal. They increased the function of NK cells in mice and then partially crushed their sciatic nerve, the main nerve that runs down the back of the leg. Then they waited and watched.

“It was as if the neurons knew what happened,” says Costigan. “They started to express the receptors that leave them susceptible to a natural killer cell attack. And the natural killer cells were responding, coming into the nerve and clearing those damaged axons.”

Within days after the nerve crush, tests indicated that the immune-stimulated mice had significantly reduced sensation in the affected paw. But once the damaged axons were cleared, healthy ones began to grow back in their place. At around two weeks after the crush, the mice’s paws regained sensation.

Other mice, whose NK function wasn’t enhanced, had a similar recovery timeline. But because their partially damaged axons hadn’t been cleared away as efficiently, tests continued to show high levels of touch-induced pain 30 days or more after the injury. This scenario is analogous to human neuropathic pain, in which damaged nerves that aren’t fully broken down may continue sending pain signals to the brain, causing chronic pain and hypersensitivity.

Looking to the future
Interfering with the immune system always carries risk, but the team’s work suggests that finding a way to modulate NK cell function could perhaps clear out damaged axons, allowing healthy axonal regrowth and potentially decreasing chronic neuropathic pain. Ultimately, understanding more about the role of NK cells in selective axonal degeneration will lead to a greater understanding of the mechanisms behind neuropathic pain. And with greater understanding, better treatments will follow.