Bringing health care closer to those who need it most 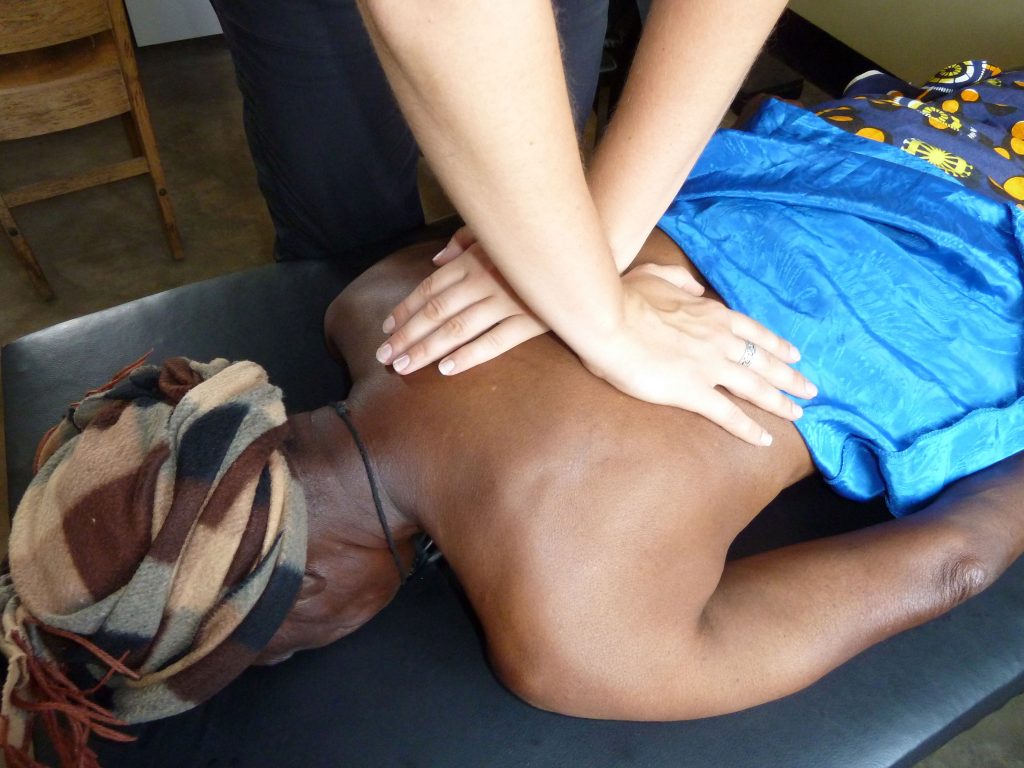 A local resident receiving chiropractic adjustment from one of the volunteer chiropractors Photo credit: Brian Budgell

When Daniel Budgell, a student at Vancouver’s Langara College, visited Tanzania in the spring of 2005 for a student project sponsored by the Canadian International Development Agency, he probably had no idea he would end up saving dozens of kids from a life on the streets, put hundreds of children through school and establish successful interdisciplinary clinics in rural communities. In other words, like most of us, he had no idea how much good one person can do.

Today, Global Peace Network (GPN), the charity that Daniel founded, operates two rehabilitation clinics in rural northern Tanzania, and is in discussions with the Ministry of Health to develop a nationwide network. The two current clinics provide opportunities for chiropractors and other health-care practitioners to address what is arguably among the most important health care challenges in Africa – the need for rehabilitation.

The World Health Organization estimates that chronic musculoskeletal diseases, especially those arising from traffic accidents and work-related injuries, account for more days lost to disability and are a greater burden on African economies than malaria, tuberculosis or HIV/AIDS.

From outside of the continent, it is easy to imagine an Africa plagued with infectious diseases, conflict and famine. These are, however, the exception with African nations. A great many countries are strikingly peaceful and, within the limits of local resources, quite productive. In Tanzania, where GPN works, the only conflict the country has ever been involved in was a collaborative effort among East African nations to expel the dictator, Idi Amin, from Uganda in 1979. Visitors describe Tanzanians as friendly and gracious.

In the last decade, per capita GDP has risen by an average of about seven per cent per year, far better than most developed nations. Consequently, Tanzania is on the path to becoming a productive and secure nation, but it has started from such a low level of wealth that it still has a long way to go. That is why GPN and other non-governmental agencies like working in Tanzania, and why Canada has identified it as a particular target for aid. This is one country where investments in health and education are most likely to pay off.

The very promising and consistent growth in the Tanzanian economy has brought the country to an interesting juncture in development, as is seen in other developing countries. Increasing numbers of people can now afford bicycles, motorcycles and used cars, but there have not been matching developments in roads and regulation of driving. Consequently, traffic accidents are soaring and are now the principal cause of death among young adults, and are the principal cause of children being orphaned. At the same time, emergency services are almost absent and less than one per cent of traffic accident victims are transported to hospital by ambulance.

With regard to the specific geographical area where GPN works, the ability to manage musculoskeletal injuries is very limited. We have only one hospital – the Bugando Medical Centre – equipped for orthopedic surgery and rehabilitation serving a population of approximately 14 million people. Trauma is the most common reason for pediatric surgery at Bugando and traffic accidents are the most common cause of pediatric admissions.

Furthermore, a recent report states that, as we have seen ourselves, “because of costs, lack of public transportation and lack of knowledge about available services, families from remote and rural areas may never see health-care professionals.”

The need for management of musculoskeletal injuries is especially acute for children. As in low-income countries overall, 98 per cent of children with disabilities do not attend school. As a consequence, young people at or entering what would be their most productive years are transformed into a burden on society and are robbed of their potential. Remarkably, the WHO estimates that fully two-thirds of long-term disabilities in children are preventable.

In northern Tanzania, most people are subsistence farmers and, outside of the cities, only a few have completed secondary school. Illiteracy is the norm, so that most people have very unsophisticated ideas about health and disease. While that seems like a great challenge, it also means that a lot can be accomplished by just explaining healthful practices. As chiropractors, we might immediately think of education about healthy ergonomics, and that has been important. However, volunteers have also made valuable contributions, for example in promoting solar disinfection of water, which is an incredibly inexpensive and effective way of purifying drinking water.

Our greatest contribution, however, must be in introducing musculoskeletal care and rehabilitation. To date, we have been fortunate to have a total of six recent graduates from the Canadian Memorial Chiropractic College volunteer for three-month rotations at our two clinics. We have also been lucky to receive one experienced physiotherapist and look forward to being joined by two more physiotherapists in the new year. All of these people have spoken of how fulfilling the work has been, and of how great the need is. We are therefore appealing for more volunteers, especially experienced practitioners, to join us in our clinics in Kanyama Village and the small town of Magu.

The Kanyama Village clinic was built by GPN in 2012, and from the beginning was staffed by nurses and clinical officers provided by the district government. A clinical officer is someone who has had a high-school education plus three years of health care training. In Tanzania, these people perform the same functions as Canadian medical doctors, including diagnosis and prescription of drugs. Several months of advanced training are required to qualify in surgery. Clinical officers are addressed as ‘doctor’ and are as close as the average Tanzanian will ever get to a medical doctor. As you can imagine, in this sort of environment, chiropractors are regarded as having extraordinary knowledge and skills.

At Kanyama, our chiropractors and physiotherapists work in close collaboration with the district nurses and clinical officers, and have introduced many innovations in diagnosis, treatment and clinic management. Fully one-third of the patients who come to the interdisciplinary clinic are children aged five and under.

The most common patient conditions are malaria, various diarrheal diseases and respiratory diseases, including pneumonia. For the chiropractors, common complaints are unresolved musculoskeletal injuries, such as unreduced dislocations and poorly healed fractures, and stroke. Stroke is very common in East Africa, even among young adults, and there is normally no follow up beyond acute care. Our practitioners have therefore made tremendous differences in people’s lives, allowing them to regain their ability to move about independently and even resume essential activities, such as farming and carrying water. In a country where most people must work every day to eat that day, this kind of care is life-saving.

Our second clinic, on the grounds of the Magu District Hospital, opened at the end of August 2016, and was overflowing with patients from the first day. Patients are referred to us from the hospital outpatient clinic, although increasingly we are becoming the preferred first stop for patients as word gets around about the expertise of our practitioners.

Both of our current clinics operate under agreements with the local government, as our intention is to strengthen, not compete with, public institutions. All chiropractic care is provided free of charge, and many medical services are exempt of a fee – for example, services to children, pregnant women and the elderly. We are now working with the national government to template our local successes into other regions of the country.

Clearly, there is a lot of clinical and political work to be done, as well as community development. However, life for our volunteers is not all work. Our clinics are within a day’s drive of the Serengeti National Park, and most of our volunteers also make an effort to visit such world famous sites as Mount Kilimanjaro, the Ngorongoro Basin, and the exotic island of Zanzibar. Volunteering in Tanzania is therefore a unique chance to see an extraordinary part of the world, while providing life-saving services in a nation that is making sincere efforts to improve life for its citizens.

Our volunteers live in a comfortable and secure lodge in Mwanza, an important and busy town on the shores of Lake Victoria. We enjoy clean water, electricity and shops with many of the goods familiar to Canadians. Mwanza is also a hub for humanitarian workers and researchers travelling in and out of East Africa, and so there is always an interesting mix of people to converse with.

If you think this might be the opportunity for you, please contact Dr. Brian Budgell at brian@globalpeacenetwork.ca.

Dr. Brian Budgell, DC, is a director of Global Peace Network and travels to Tanzania each year to manage local relationships and conduct volunteer orientations. He is also director of Life Sciences Laboratories at Canadian Memorial Chiropractic College.