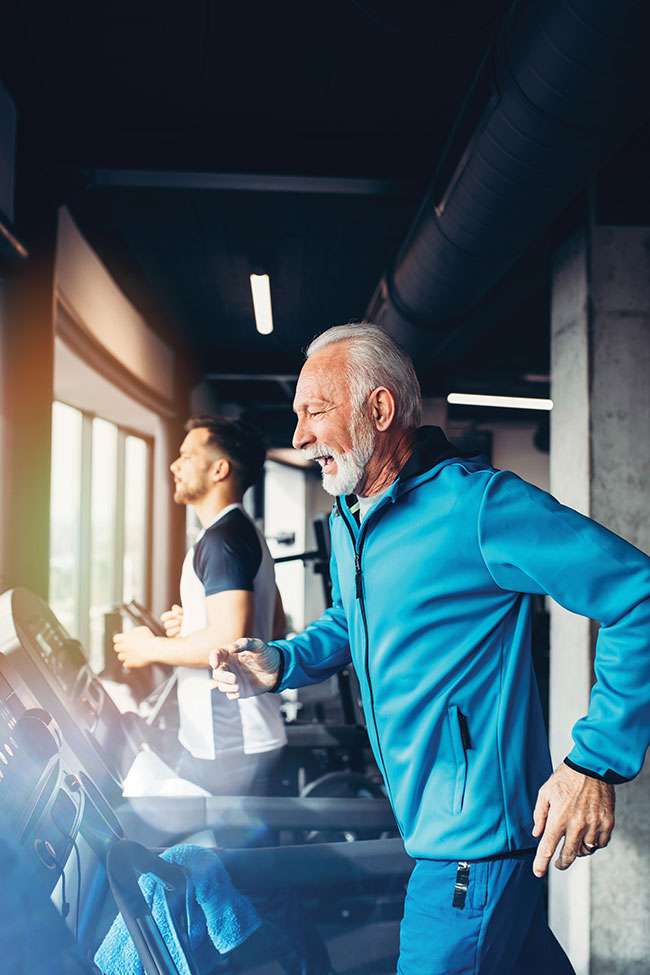 We know that exercise positively affects the cardiovascular and respiratory systems. As we age our cognitive function declines. We stop at times and search for words, some sources call it the “senior pause,” we don’t remember where we left our keys sometimes. Our thinking process slows, our recall is not as sharp as it used to be and our reaction time increases. Some people get more anxious, some are depressed, others decrease their socialization and some because of their fear of falling, limit activities. Our minds begin to play amazing games with us.

Life and Longevity part 1: An opportunity to lead

Life and Longevity part 3: Muscle care for the aging person

These aspects of cognitive decline do not happen to all of us. Why is this? Are there differences in the lifestyles of people that may be a contributing factor? Are there things that can be done to slow or reverse these symptoms? Can exercise help our cognition? What we saw in a previous article was that physiologic changes of aging that limit function and general quality of life occur faster as aging occurs. As outlined in previous articles there is high-quality evidence that exercise activity has many favourable benefits for older adults. Exercise programs can increase muscle strength and prevent falls. To achieve these results, the exercise programs should be personalized, tailored to the individual’s abilities, goal specific, multimodal and be of sufficient intensity, volume, and duration to achieve maximal benefits.(1)

Would an exercise program following the same parameters affect cognitive function? Are there special types of exercises that are more beneficial to prevent one from becoming a cognitively challenged person? Cognitive impairment is a health problem that concerns almost every aging person. A study addressing senior brain health exercise (SBHE) program involving elderly women for 12 weeks, found that the SBHE program resulted in positive effects  of basic physical fitness (strength and aerobic endurance) as well as cognitive function and brain- derived neurotrophic factor -BDNF.(2)

Physical exercise positively affects the cardiorespiratory system and improves muscle strength. What would happen if both were synergistically combined? Would they have an enhanced effect on cognitive function? Or would they each target a specific area of the brain? A study examining a multicomponent physical exercise program complemented with novel simultaneous cognitive training found that specifically, executive functions benefit from simultaneous cognitive-physical training compared to exclusively physical multicomponent.(3) This would imply that cognitive-physical training programs may counteract cognitive impairments in the aging. Exercise is a non-pharmacological strategy to mitigate the deleterious effects of aging on brain health. Interestingly, reviews showed that women’s executive processes may benefit more from exercise than men. Overall, aerobic training led to greater benefits than resistance training in global cognitive function and executive functions, while multimodal combined training led to greater benefits than aerobic training for global cognitive function, episodic memory, and word fluency.(4)

Physical exercise has been shown to induce structural plasticity in the human brain and to enhance cognitive functions. Are there specific exercises that cause brain structural changes which may facilitate improved cognitive function? Balance training which challenges the sensory-motor system and vestibular self-motion perception induces structural plasticity.(5) As these regions are known for their role in spatial orienting and memory, stimulating visual-vestibular pathways during self-motion might mediate the beneficial effects of physical exercise on cognition. Lifestyle factors, brain structure, function, and cognitive function in aging adults seem to be related. For example, physical activity and diet modulate common neuroplasticity substrates (neurotrophic signalling, neurogenesis, inflammation, stress response, and antioxidant defence) in the brain, whereas cognitive engagement enhances brain and cognitive reserve.(6)

In a meta-analysis, the findings showed that participants over 50 could improve their cognitive function by participating in physical exercise only involving aerobic and resistance exercise.(7) Physical exercise needs to be of moderate-intensity and frequency. Again this has to be personalized to achieve maximum benefits. Aerobic exercises increase blood flow and nutrients to the brain, resistance exercises appears to improve frontal cortex area of brain function.

As well, exercise increases brain-derived neurotrophic factor BDNF, which accumulates in the hippocampus of the brain. BDNF causes nerve cells to grow, which is similar to learning. The hippocampus is associated with learning and memory. Hence exercise can specifically affect an aspect of cognition. BDNF has a central role in brain plasticity by mediating changes in cortical thickness and synaptic density in response to physical activity and environmental enrichment. A single bout of physical exercise has a significantly larger impact on serum BDNF levels than either cognitive training or mindfulness practice in the same person.(8) Acute circulating BDNF was dependent on the level of physical fitness and correlated with training-induced improvements in metabolic and cognitive functions.(9)

Aging contributes to a decline in memory and other brain functions. Because skeletal muscle strength and function also decline with aging, do skeletal muscles and the brain communicate? It is known that physical exercise may slow the decline of muscle and brain through the modulation of factors participating in the crosstalk between skeletal muscle and the brain, such as neurotrophins and oxidative stress parameters. It has been shown that the positive impact of long-term exercise training(35 ± 15) years, delayed the onset of physiological memory loss and the associated neurotrophic and redox peripheral modulation, suggesting the effectiveness of exercise as a preventive strategy against age-related memory loss and neurodegeneration.(10)

Can we manipulate other factors that may enhance brain function and cognition? What would happen if we did fasting and vigorous exercise before breakfast? Brain cell energy substrate utilization would shift from glucose to the ketones, which has been shown in numerous studies. Neurons maintained in the presence of ketone metabolism increase mitochondrial respiration which drives changes in expression of brain-derived neurotrophic factor BDNF, along with mediating adaptive responses of neurons to fasting, exercise, and ketogenic diets.(11) We could also add Vitamin D, K2 and magnesium, as this combination has been shown to assist with cognitive function.

Is it only exercise that can improve cognitive function in the ageing population? Is there a fun way to obtain positive effects for the brain and cognition? Studies have shown that dance is a safe and effective way to improve cognitive function. A challenging dance program in some ways is better than standard fitness activities and can lead to volume changes in certain brain areas.(12, 13) Dancing can also contribute to neuroplasticity, leading to structural changes such as increased hippocampal volume and white matter integrity. Functional/cognitive changes  include  improvement in memory, attention, body balance, psychosocial parameters and changes to peripheral BDNF.(14) Dancing also improves cardiovascular fitness and this increases blood supply and nutrients to the brain. Dancing involves agility which involves quick movements, memory, attention and concentration. The aging population should dance more.

Summary
When we exercise or dance, particularly if the activity requires complex motor movements, we’re also exercising the areas of the brain involved in the full suite of cognitive function. We’re causing the brain to fire signals along the same network of cells, which solidifies their connections.(15)

Can you imagine if we also encouraged the patient to stay hydrated, incorporated good nutrition, supplementation such as Vitamin D, K2 and magnesium, good sleep habits and social/recreational interventions into their lifestyles? I think they would benefit even more.

Dr. Don Fitz-Ritson is a chiropractor and a rehab specialist. He was an Assistant Professor at CMCC. He published 17 papers and 3 chapters on chiropractic.He co-invented a laser and it received 7 Health Canada Approvals. He is focused on helping the aging population live better lives.