BC chiropractor to row across the Atlantic 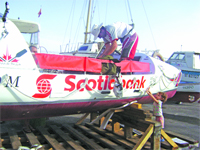 This poem can be found at www.solotheatlantic.com, the website that contains information about Dr. Paul Attalla, DC – a chiropractor from Fernie, B.C. – and his 100 day journey as a competitor in the Atlantic Rowing Race, 2007.

36-year-old Attalla began the 5500-km race from San Sebastian, La Gomera, in the Canary Islands, on December 4. Attalla’s boat is the only Canadian entry in this race – he is one of five solo racers. Billed as the “Jamaican Bobsled Team of the ocean-rowing world” at the qualification events in the U.K. last May – Canadians don’t normally participate in rowing events – Attalla’s boat is also the first Canadian entry in the history of this race.

The race is scheduled to end in early March 2008 at Antigua, in the West Indies.

A graduate of Western States Chiropractic College in Portland, Oregon, Dr. Attalla muses, “Spending 100 days at sea, testing my physical and mental limits, has appealed to me for many years.”

This race promises, indeed, to be a test of endurance and strength. In the 2005 race, competitors faced the tail end of a hurricane, a horrific shark attack, three tropical storms, many capsizes and six dramatic rescues. By December 8, Dr. Paul’s own blog was already reporting terrible sea-sickness as well as waves and wind that made it too rough to light the stove or make water. By December 9, there was a leak in Dr. Paul’s boat but the weather – and, hence, Dr. Paul’s stomach – was co-operating with his efforts at repair. However, these setbacks were being balanced by the retinue of dolphins that have joined him and the sea-turtle that is courting his cleaning brush!

Attalla’s craft is a Woodvale solo-class rowing boat – there are no sails or motors involved in this race. Its length is 23.11 feet, its beam measures six feet and weighs 617 pounds. The boat has been designed to give the long-distance solo rower the comfort and stowage to complete ocean crossings. The craft’s cabin volumes make the boat highly self-righting and the lowered aft cabin floor make it possible for the rower to sit upright, not stooping, when taking shelter from weather. The addition of a centre board to this type of boat means that it can be rowed into weather.

Prior to his departure from the Canary Islands, Attalla held a sticker-posting party to add the necessary finishing touches to his craft; all guestbook entries that had been made to his website, to that date – including one from Canadian Chiropractor magazine – were glued onto the boat and his daughters further decorated with finger-paint and glitter glue.

As he left the harbour, Dr. Paul was able to enjoy the sounds of his daughters, Joy and Amy, sounding fog horns as well as his friends’ rendition of “Oh Canada.” Although he considers his opportunity to participate in this race – billed as the “toughest self-propelled race in the world” – to be a dream-come-true, Attalla notes that actually pulling out, at the start of the event, was “The toughest thing I’ve ever done.”

Attalla’s journey is being made possible with contributions from several corporate sponsors including the British Columbia Chiropractic Association. Proceeds will go to the Canadian Museum for Human Rights. For a day-to-day update on Paul Attalla’s progress through the race – as well as information on becoming a sponsor or making a donation – visit www.solotheatlantic.com.