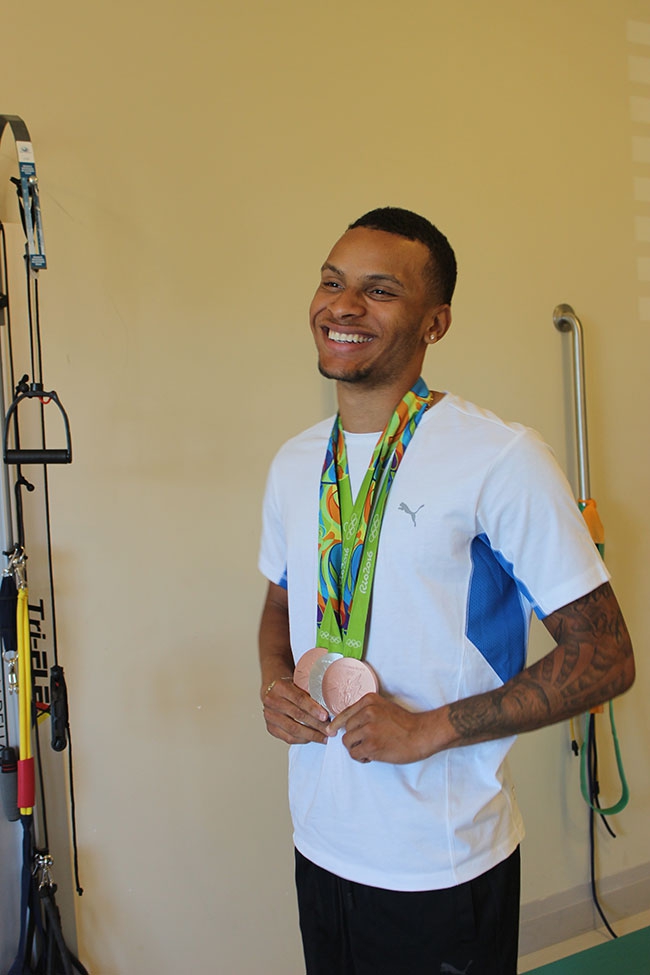 Being at the right place at the right time would probably best describe how the now Olympic-medalist got started in the sport that changed his life. Getting to where he is today, however, requires a lot more than just a stroke of fate. It takes commitment, discipline, lots of hard work and a great support team, De Grasse says.

De Grasse acknowledges he relies significantly on the team of professionals that support his health, training and development.

“I’m just really appreciative and grateful to these people in my corner,” De Grasse says. “Not everyday you get that type of opportunity or have certain people behind you like that. I’m thankful to them for believing in me and motivating me and getting me to where I am today.”

Canadian Chiropractor caught up with De Grasse during one of his visits with Dr. Alban Merepeza, a chiropractor in Port Hope, Ont., who has been caring for De Grasse since he started his sprinting career. Even when his track training and university education have taken him out west to Arizona and California, De Grasse still sees Merepeza not only as his chiropractor of choice, but as his friend. When he can find the time between his busy schedule at the University of Southern California and his training in Arizona, De Grasse flies home to his family in Markham and makes a point to go to Merepeza’s clinic for treatments. From time to time, the Port Hope chiropractor also would fly out to treat De Grasse during training or at his competitions.

As a professional athlete, De Grasse receives care from other health care providers as well, including other chiropractors. He admits, however, Merepeza’s hands are the ones he trusts most.

“Alban and I just developed a great relationship, working together, getting to know him and his family – it’s great,” De Grasse says. “I’ve seen a lot of chiropractors over these past couple of years and no one could do as much as (Merepeza) has done for me.”

He adds having people that he fully trusts around him, especially leading up to and during big competitions like the Olympics, plays a big role in building up his confidence as an athlete. He mentions his coach, Stuart McMillan, and members of the Altis team who have “helped me get to the next level to accomplish a lot.”

Turner is the team chiropractor for Cycling Canada, working specifically with track and BMX athletes. She travelled with the team to  the Rio Olympics last summer, where Glaesser’s team won the bronze medal in the women’s team pursuit.

“(Turner) was at all my major competitions and a lot of our training camps,” Glaesser says. “It’s not just the work she did with us; it’s the presence she had. She was a friend then and we stayed friends ever since.”

The 24-year-old cyclist from Vancouver describes how track cycling can be hard on one’s body, given the “unnatural position” the body assumes while on the track. Back pain, shoulder pain and hip impingement are some of what Glaesser has to deal with as a cyclist.

This is why it’s important for her to have confidence in the people around her tasked with ensuring her health and wellbeing.

“When you’re trying to get ready for a big race and everything needs to be perfect, having Jenn (Turner) on site to deal with those things right away, to make sure that problems aren’t accumulating, and just to be able to deal with everything right away made a huge difference,” Glaesser says.

She recalls at least one incident when her chiropractor came through for her. Glaesser and her team were travelling to a world championship when she started having back spasms. Turner, who was also travelling with the team at the time, tried to relieve Glaesser’s symptoms right away while still at the airport waiting for their connecting flight. This initial treatment provided some relief for the athlete and helped her to get through the next flight more comfortably.

Glaesser particularly likes Turner’s use of active release technique. “It’s something that really works for me as an athlete, to sort everything out… not just to fix things when they go wrong but also to help prevent that.”

Active practice
Sport has always been an interest of Turner’s – who competed in high-level triathlon in the past. She opened her practice in 2006 – a year after graduating from Canadian Memorial Chiropractic College – and set up her clinic focused on serving active individuals and recreational athletes, understanding that she can’t build her practice just on professional athletes’ business alone.

“I started treating a lot of cyclists and triathletes because that was the environment I was immersed in myself,” says Turner who, as a triathlete, has competed internationally and won the gold medal at a world championship in Denmark in 2005.

“The athletes that I trained with and that I raced with wanted to come and see me because I knew what they were going through as well,” she says.

Since becoming a team chiropractor for Cycling Canada, Turner has been to two Olympic Games – in London in 2012 and in Rio last summer.

Turner agrees that chiropractors – and other sports medicine practitioners – have a unique patient-doctor relationship with their athletes. These health professionals usually spend so much time travelling and training with the athletes, even seeing them more often than they would their regular patients at their clinics.

“That’s part of the reason that you become so close (with the athletes)… you become intertwined in so many aspects of that athlete’s life and training and daily environment,” Turner explains.

It’s only natural then for the chiropractor to feel proud of what her athletes have accomplished and actively root for them to succeed and do well.

Aside from Glaesser, Turner has also been working closely with Tory Nyhaug, a BMX racer from Coquitlam, B.C., who made his Olympic debut in London in 2012 as Canada’s only contender in BMX racing. He was the first Canadian BMX rider to make it to the finals at the Rio 2016 Olympics, finishing fifth overall.

That was a proud moment for Turner. “It was an indescribable feeling,” Turner recalls. “It’s almost like I accomplished what Tory had accomplished.”

Seeing their athletes avoid injury during competitions is also somewhat of an accomplishment, Turner says. “With BMX, injuries are quite common and quite serious. So that was also part of where my heart was in Rio – yes, I was wanting him to do well, but I was also not wanting him to crash.”

Injuries from BMX racing or track cycling are not the typical conditions she would see among her regular patients at the clinic, Turner says, as these high-level sports injuries are usually more serious – fractures, dislocations, and sometimes, internal injuries, which she needs to be able to recognize on the field and refer appropriately.

“The stakes are a lot higher and definitely a lot more out of my comfort zone,” Turner says.

Team effort
Taking care of high-level athletes involves more than just administering the right techniques – although, Turner finds active release works very well with many of the athletes she looks after. She ensures her athletes are educated about how their body works and what treatments she is providing.

Through the years of working with Turner, Glaesser has come to understand her body a little better. “When Jenn treats me, generally she’s always telling me about the injury I have… she’s been able to help me relate what’s going on with my body to what I’m doing to it.

“I think it’s really important for athletes to learn about how their bodies respond to the training that they do and be able to prevent injuries from happening,” Glaesser says.

Being surrounded by a multidisciplinary team of health professionals is a benefit that many elite athletes enjoy. Not only do they learn more about how their body responds to their training, but also how to take care of it and adopt a healthier lifestyle through coaching from the experts.

De Grasse says he’s learned a lot about how to eat healthy from the nutritionist that’s supporting athletes like him at the University of Southern California.

“We have team meetings every week to discuss the things that we need to have, like protein, carbs – everything that we need to be successful,” De Grasse says. The discipline that he has achieved through training includes being aware of what he eats and how food intake plays a role in his performance.

Life outside sports
This is De Grasse’s last semester in university as he is set to complete his degree in sociology. Despite his busy athletics career and the success he is having on the track, finishing school was always part of his plan. It was a promise he made his mother, and he plans to keep it.

“My mom has been very supportive of me and I’ve always told her that – I promised her – that even though I turned professional, I was going to go back to school and finish,” De Grasse says, adding in whatever he does he is always trying to make his mother and his family proud.

As for Glaesser, she is planning to take a short break from cycling as she enters married life (she got married in the latter part of 2016). She is also a full-time student at Simon Fraser University in Vancouver. She has another year and a half left before she completes her degree in computing science.

Like De Grasse, finishing school and focusing on life outside sports is also important for Glaesser.

“I think it’s important for athletes to balance their athletic career with career that has more longevity and the family as well,” she says. “I’m not just doing it for myself; I’m doing it in a way that includes the people in my life.”

MARI-LEN DE GUZMAN is the editor of Canadian Chiropractor magazine. She has worked in publishing for 20 years and has been editor of several business and professional magazines. You may contact her at mdeguzman@annexweb.com.