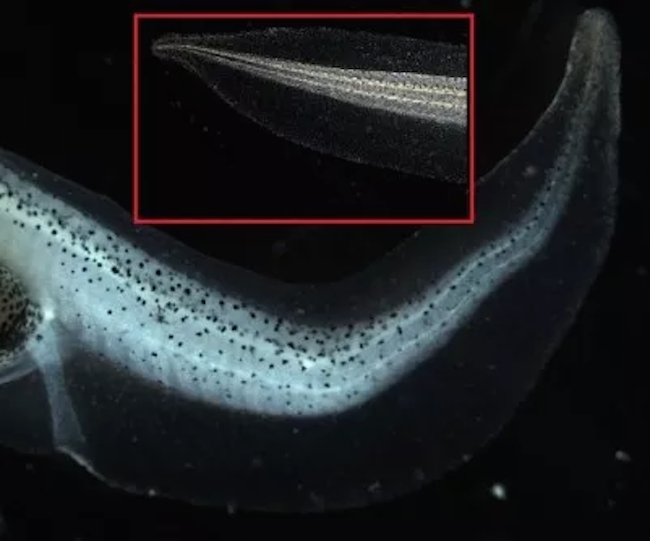 Without a brain, frog embryos exposed to a teratogen developed an abnormal, curled tail and spine. In contrast, embryos with brains developed normal tails and spines (inset) even after exposure to the same teratogen. Celia Herrera-Rincon, Allen Discovery Center at Tufts University

The brain plays an active and essential role much earlier than previously thought, according to new research from Tufts University scientists in Medford/Somerville, Mass., which shows that long before movement or other behaviors occur, the brain of an embryonic frog influences muscle and nerve development and protects the embryo from agents that cause developmental defects.

Remarkably, the brain performs these functions while it is itself still developing, marking the earliest known events of the brain-body interface. In addition to identifying these essential instructive functions for the first time, the Tufts researchers successfully rescued defects caused by lack of a brain by using widely available, human-approved drugs.

The discoveries, reported in Nature Communications on Sept. 25, could expand understanding of human cognition and neuroplasticity and lead to better ways to address birth defects, treat injuries and regenerate or bioengineer complex organs. Frogs are a widely used model in biomedical research because they share many basic biological mechanisms and processes with humans.

“Everyone knows that the brain guides behavior, but these data suggest that we need to revise our view of the brain as quiescent prior to an animal’s independent activity. Our research shows that the brain is engaged long before that, before it’s even fully built. What is particularly promising on the therapeutic side is that we were able to reverse developmental defects that result in the absence of a brain by applying relatively simple bioelectric and neurotransmitter manipulations,” said the paper’s corresponding author, Michael Levin, Vannevar Bush professor of biology and director of the Tufts Center for Regenerative and Developmental Biology and the Allen Discovery Center at Tufts. The Allen Discovery Center at Tufts focuses on reading and writing the morphogenetic code that orchestrates how cells communicate to create and repair complex anatomical shapes. The centre includes researchers from Tufts, Harvard, Princeton, the University of Chicago and Tel Aviv University.

Rescuing “birth” defects
To examine the role of the brain during early development, the researchers removed the brains of Xenopus laevis frog embryos 27-1/2 hours after the eggs were fertilized, long before independent embryonic activity occurs.

Brainless embryos showed problems in three main areas. Most obvious was abnormal development of the muscles and the peripheral nervous system. Collagen density diminished, and muscle fibers were shorter and lacked the characteristic chevron patterning found in normal embryos. Peripheral nerves also grew ectopically and chaotically throughout the trunk, revealing that even regions far away from the brain depend on its presence and activity for normal embryogenesis.

In addition, when exposed to chemicals that do not cause birth defects in normal embryos, embryos without brains developed severe deformities, such as bent spinal cords and tails. These results demonstrated that the normal brain provides a protective effect against exposure to influences that without the brain’s activity would act as potent teratogens.

Importantly, the researchers were able to rescue many of these defects by administering scopolamine, a drug used to regulate human neural function, or injecting messenger RNA encoding the HCN2 ion channel, which modulates bioelectric signals in many contexts and animals, including humans.

“Our data suggest that the brain exercises these functions using electrical and chemical channels that communicate locally and at a distance. Such distributed communications means we may be able to repair damage in a difficult-to-reach site by providing therapies to more easily-accessible tissues. Being able to treat one part of the body and see results in another part is particularly valuable in specialties like neuroregeneration,” said the paper’s first author, neuroscientist Celia Herrera-Rincon, a postdoctoral researcher in the Levin laboratory.

Future research will focus on decoding the specific information being sent through the newly identified communication channels from the brain, identifying other body structures that require brain presence, exploring relevance in other species, and honing the ability to provide brain-like signals in other contexts to improve complex patterning and tissue repair.

Levin is particularly fascinated by the question of how the brain, or any structure, can deliver information while it’s still being built and whether other organs have similarly special roles.

“The brain and body form a feedback loop; the brain is being constructed by the embryo’s patterning activities even as it itself is contributing instructive guidance to those processes – a delicate balance between structure and function. Explaining this could lead to understanding how brains keep memories during massive remodeling and regeneration. We might one day be able to regenerate portions of the brain while the memories were still intact,” he said. “We have already found that the brain performs important functions at this stage of development, and my guess is this is only the tip of the iceberg.”

In addition to Herrera-Rincon and Levin, paper authors are Vaibhav P. Pai, Ph.D., and Joan M. Lemire, Ph.D., research associates in the Levin laboratory, and Tufts undergraduate Kristine M. Moran, a rising senior who is pursuing a B.A. in community health.