For love – not money 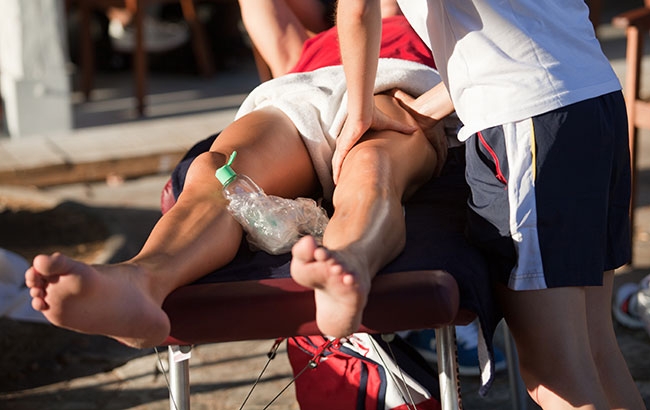 When I was in chiropractic school a professor told me chiropractors in the NFL made a salary of $250,000 per year. I believe my professor was telling me what they thought to be the truth – although they have been misinformed.

I recently read a wonderful article in the Canadian Chiropractic Association magazine, Back Matters, about the chiropractor for the CFL’s Toronto Argos. It was a very engaging read. What struck me as odd was that there was no mention of financials, abstract business arrangements, or any indication of how a chiropractor on a CFL team is reimbursed for their time.

It’s important to mention because the misconception and potential for misinformation can become greater within the profession when the topic of financials is not addressed. The reality is that chiropractors in the CFL and NFL do not get reimbursed fairly for their time. Essentially, it is volunteer work – and it is the same for the medical staff as well. A team medical doctor in the CFL makes a little over $2,000 per year in travel stipend. In fact, believe it or not, the team MDs in the NFL actually pay anywhere from $300,000 to $750,000 per year to be the official group MDs for that NFL team. Chiropractors in the NFL and CFL usually receive tickets, memorabilia, and team clothing as compensation. These were all verified by team DCs and MDs from both respective football leagues.

I emailed the editor of Back Matters to ask if the decision to leave out financials in the article was a philosophical decision on the part of the CCA or if it was simply overlooked. I sent two emails, received confirmation of delivery, but never received a response.

I tracked down Toronto Argos DC Dr. Dwight Chapin. He said the intention of the article was to focus exclusively on his clinical role with the team. He went on to say: “Having said that, the focus of your article is important. I would agree with you that the expectations of young chiropractors and/or students regarding compensation when working with athletes is unrealistic. I do not do it for the money. The compensation is minimal.”

Former CFL player and current B.C Lions chiropractor Dr. Sean Graham said the compensation he receives are season tickets and memorabilia from the players. He says his motivation for doing it is to stay connected to the game.

A CFL team medical doctor, who asked to remain anonymous, said doctors in pro sports in Canada usually receive a minimal travel stipend. This doctor contends that MDs, DCs, physios and trainers are all undervalued in Canadian athletics. “Most MDs do it because they love the sport. It definitely does not have a financial reward. It’s a personal reward.”

I wanted to find out the arrangements in the NFL between teams and DCs. I contacted the Professional Football Chiropractic Society (PFCS), which is an association of NFL chiropractors. At first they agreed to entertain my query. However, once I started asking questions about money, their volunteer work, and the misinformation surrounding working in pro sports, they did not return repeated emails – individually, on their site, or on their Facebook page.

Thankfully, one NFL chiropractor came forward and agreed to be interviewed anonymously. The chiropractor explained that since the collective bargaining agreement (CBA) does not require a team to have a chiropractor on staff, the only way a DC works for a pro team is by being an independent contractor.

A pro team can call you their team chiropractor but it is up to you to negotiate a fee for your service. The DC said that in the past they were compensated with team season tickets, Super Bowl tickets, and team performance bonuses.

According to this chiropractor, with respect to MD groups, the CBA allows NFL teams to hire groups who pay the team between $300,000 to $750,000 per year to be considered as the team’s official doctors. The medical group who becomes the team doctors can recoup their money by billing players and team staff for all medical services provided that year. The NFL teams then use a portion of the money paid to them to advertise for the medical groups at games, on TV and print media.

Wait a second. The doctors pay the team? According to Dr. David Geier, a medical doctor, this is actually true.

“Often there is a separate contract that allows the physicians to advertise that they are the official team physicians. Those contracts involve huge amounts of money. Whether paying a lot of money to advertise serving as a physician for a pro team generates enough patients to make it worthwhile is debatable,” Geier says.

In an article by Darren Rovell, NFL Raiders’ team medical doctor for eight years, Dr. Robert Huizenga, said: “In this arrangement, a medical organization provides the team doctors often for free and also pays for a marketing arrangement which advertises the deal to fans. Does the Hospital For Special Surgery in New York really have the best doctors for the Mets, Giants, Knicks, Nets and Red Bulls or is it because they pay for the right to say they treat the teams?”

Huizenga then said something I have been saying for years: “The players have to know that if they want the best care, they can’t see the doctor for free, the players have to step up and pay for the work themselves.”

These words echo my previous article, “What Athletes Want,” from 2012. In that piece, I ask several professional athletes, which they value more: a doctor who charges a fair price for treatment or a doctor who treats them for free?

NHL’s Vancouver Canucks defenseman Even McEneny said: “Generally, my opinion is that if the treatment is free then the therapist won’t care as much. It’s important that the therapist is motivated, and wants to do a good job to make sure I return for another treatment.”

CFL’s Montreal Alouettes lineman Brian Simmons stated, “Usually you get what you pay for in life. With that said, I want someone that charges me the fair price because it will make me feel as if he is serious about his practice.”

It is clear that DCs in professional sports are not compensated well. Our professional associations must rethink their vision instead of indirectly promoting the undervaluing of our services. Ask yourself: Do the NFL team lawyers work for free? How about the accountants of CFL teams?

Anonymously, an accounting firm employed by a CFL team told me they, in fact, get paid by the pro teams. According to NFL sports lawyer Darren Heitner, lawyers in the NFL make between $100,000 to $1 million a year. Other professionals get paid respectable wages as well: executive accountants, payroll analysts, even accounting interns.

If our associations and our profession want to be taken seriously as a mainstream athletic health-care option, then we should start acting like it. Otherwise the mantra, “you get what you pay for,” will remain associated with our services.

Dr. Anthony Lombardi is consultant to athletes in the NFL, CFL and NHL, and founder of the Hamilton Back Clinic in Hamilton, Ont. He teaches his fundamental EXSTORE Assessment System and conducts practice-building workshops to health professionals. Visit exstore.ca for information.