Business Talk: School’s out – The chiropractic college to career transition 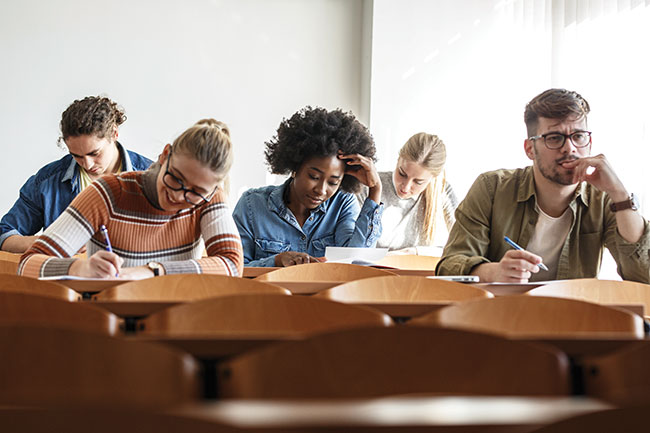 One would think that any meaningful piece of literature written on chiropractic business development and entrepreneurship would be written by a chiropractor. However, in 2019, a 200-page dissertation titled “A narrative inquiry into the college-to-career transition of chiropractors who built financially viable private practices,” was presented to the Faculty of the California School of Professional Psychology Alliant International University in Fresno. This was in partial fulfillment of the requirements for the degree of Doctor of Psychology written by James A. Sampair, M.S., M.A. The (now) Dr. James Sampair was an avid reader of my column in Canadian Chiropractor magazine and referenced three of my articles throughout his dissertation.

In his abstract, Dr. Sampair makes several arguments he defends throughout the 200 pages. He says that chiropractic graduates had been trained and prepared extensively to be clinicians before they were licensed, but most private practice owners needed to learn how to be entrepreneurs if they were to be financially self-sustaining. He amassed qualitative work which created a narrative inquiry method to investigate the experiences of 10 chiropractors who had built financially viable private practices during their college-to-career transition. He asked them to simply: “…share your experience of developing a financially viable private practice after chiropractic college.” The DCs who participated had been licensed between four and 14 years, initially being licensed between the years of 2004 and 2014. Four themes emerged: integrity, perseverance, making a difference, and partnerships.

The research question was: “What was the experience of chiropractors as they developed a financially viable private practice after graduation from chiropractic college at the beginning of the 21st century?”

Dr. Sampair evaluated the literature (which included Canadian Chiropractor) and he found that in spite of the longstanding entrepreneurial tradition within the chiropractic profession, and despite the courses, preceptorships, and resources available to students and alumni, chiropractic practitioners rated their preparation to be entrepreneurs poorly.

After graduation, Dr. Sampair revealed that new graduates were largely left to manage their college-to-career transition in isolation. In short, there is a distinct difference between change and transition. Transition was found to be a “psychological re-orientation and self-definition” one has to process. Transition from school to career meant that graduates had to let go of the past. This was best delineated by many of the 10 chiropractors interviewed in the dissertation. I believe we can learn from all of these chiropractor’s experiences. As you read through some of their comments and experiences, pay special attention to the stress in their responses. Many of us can probably relate. These doctors were overwhelmingly candid.

Dr. Holly said: “I think I had an after-school depression. You’re in school for 40 hours a week for 3.5 years with these people, and so you are ending up creating a family. And then all of a sudden you all reach that common goal, you graduated, and then boom – the family just disappears. There’s no purpose anymore. There’s no getting up to go to school. There’s starting a business.”

Dr. Abe said: “They said you’re on your own. You’ve got to go get your own patients. It forced us to learn how to market, but we didn’t know how to market.” Dr. Abe attributed the development of his marketing and other business skills to his working for a field doctor. Dr. Abe had to memorize his part of the script, then use that verbiage to attract passers-by to Dr. Z’s spinal screenings. “What am I in an acting class or something? I feel like I’m rehearsing for a play,” he says. “I was like, ‘this is chiropractic?’” In his own words, he eventually learned that keywords triggered certain emotional responses. They were woven into the scripts. That’s why Dr. Abe had to say it in a certain way, tilt his head to the right, sound sincere and caring. He said that he learned that bonding first is the most important.

Dr. Faye talked about bonds and the importance of relationships in her initial experiences outside of school: “Families would come in to see her and say, [“Dr. S! Oh, look, I lost my tooth.” and she’d go, “How was your vacation?”] and I was like, “Okay, she’s not their dentist. Why does she care if the kid lost its tooth? And how did she know they went on vacation at Disneyland?” She realized that the chiropractor became part of the family’s life and she wanted to be a part of that.

Dr. Dan stressed that school did not teach him how to be a manager: “The other things that you don’t learn, like managing people, hiring people, firing people, dealing with a team…I was so nervous. I didn’t know what to look for, and who to look for, and just everything. Then the thought of paying for somebody who wasn’t going to do a good job. It’s almost like you are super emotional in the beginning, and as you do it, you numb yourself a little bit. Your decision-making skills get better and better as the anxiety of making wrong decisions goes away through experiential, hiring and firing, and the experiences with that have moulded the business as much as chiropractic school ever did.”

Dr. Gail candidly explained her experience: “You know, you’re trained to be a chiropractor…but not trained to be a businessperson. They teach you how to write a business plan, which no one, I don’t think, ever grades or looks at. They tell you some ideal statistics, like your overhead should not exceed whatever percentage. That’s pretty much the extent of it. There’s no business training. I remember coming out and thinking: ‘Payroll. You just pay somebody.’ I didn’t realize you need a payroll company, or you have to do payroll taxes.”

I will leave you with an email I received from Dr. Sampair himself:
I’m honoured to know about the summary you’re writing. That’s exciting for me to know because my main audiences were chiropractic students and new graduates, and I believe that your summary will bring the interviewee’s wisdom to so many more people now. And, if there’s any way it can help chiropractic college administrators to better understand the college-to-career transition, then that would be phenomenal.

Let us hope that the schools are listening so that Dr. Sampair’s hope becomes a reality.

Anthony LOMBARDI, DC, is a private consultant to athletes in the NFL, CFL and NHL, and founder of the Hamilton Back Clinic, a multidisciplinary clinic. He teaches his fundamental EXSTORE Assessment System and practice building workshops to various health professionals. For more information, visit
www.exstore.ca.