“Causalgia” – A curious case of a crazy kind of pain 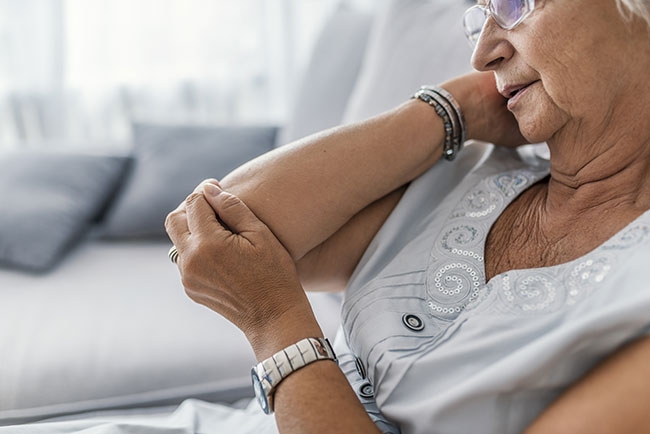 Last month, a rather elderly woman presented with a bad case of low back pain.

Getting out of the waiting room chair was a huge struggle – she fought her way through harsh back spasms just to stand up, gritting her teeth and relying on a walker to make her way to the exam room. Not once did she cry out in pain, not a whimper escaped from her lips. “Florence” was tough-as-nails, a real trooper. She said she’d been this way for nearly six weeks and was determined to not let it get the best of her.

As we first sat down for the interview, face to face, she made one thing abundantly clear: “Whatever you do” she said, “DO NOT touch me there!” She pointed to the outside of her left knee. That’s a tough request to a hands-on healthcare professional. Palpation is what we do, but I said I would respect her wishes and made a mental note to to dig a little deeper.

Not 30 seconds later, as she spoke of the challenges of caring for her beloved ailing husband, I reached out in sympathy to touch her hand. My arm inadvertently brushed up against the side of her knee and she yelled. Her face twisted and grimaced with pain, as though I’d just “dragged a sheet of sandpaper across freshly scalded skin.” (Her words, not mine). I had so many questions.

Because my very first thought was that if this wasn’t a case of shingles, she might have the first symptom of necrotizing fasciitis  – flesh-eating disease. It causes extreme, agonizing pain in a particular area of the skin with no apparent history of local trauma that could account for such intense suffering.

I’ve seen three cases of necrotizing fasciitis (NF) in my career, all after the fact. These patients recalled their pain the same way Florence was describing it to me now – it was so unusual, so intense and so coloured with shades of fear and dread. I knew it was critical that she get to the hospital for emergency care because NF can and does go bad very quickly. Then she told me that this mystery pain started two days after her total knee replacement surgery – and that was four years ago. So I wouldn’t be calling 911, but I did need to know more. Over all this time, what has her doctor said and done? Try this drug, then this one, then a different one. Nothing has worked to relieve her pain in any meaningful way and they all otherwise made her feel awful inside.

Florence didn’t know what this was or what caused it, and if her doctor knew, she wasn’t talking. Apparently this “knee” problem was the surgeon’s problem. Florence had been back to see him four times, maybe five. The surgeon did three different sets of X-Rays. “It looks like the prosthetic is all good. These things happen sometimes. So sad, too bad.” If she wanted, they could amputate.

All I could think was that she’s spent four long years in a constant state of apprehension, fiercely guarding her knee from any touch that would set off that pain. And now her low back has gone bad.

Her low back pain was a clear-cut case of mechanical dysfunction – the flexion antalgia, altered muscle tone, joint play restrictions, and facet inflammation all pointed in that direction. Other than the mystery pain at her knee, there were no radicular signs or symptoms and muscle power/deep tendon reflexes were normal, so there wasn’t likely to be any space occupying lesion (disc bulge, osteophyte or tumour).

She revealed that she had experienced similar episodes of back spasms more than a dozen times in the past, and recovered well each time with physiotherapy. I advised her that conservative treatment for her low back pain would be perfectly appropriate. Restoration of better function could be expected to relieve her bad back significantly.  The pain of her knee is a whole other issue. It does not appear to be a mechanical problem. As I examined passive ROM’s of Florence’s hips and knees, I noted that as long as I didn’t touch (or almost touch) the painful area, position or movement had no effect on her symptoms. 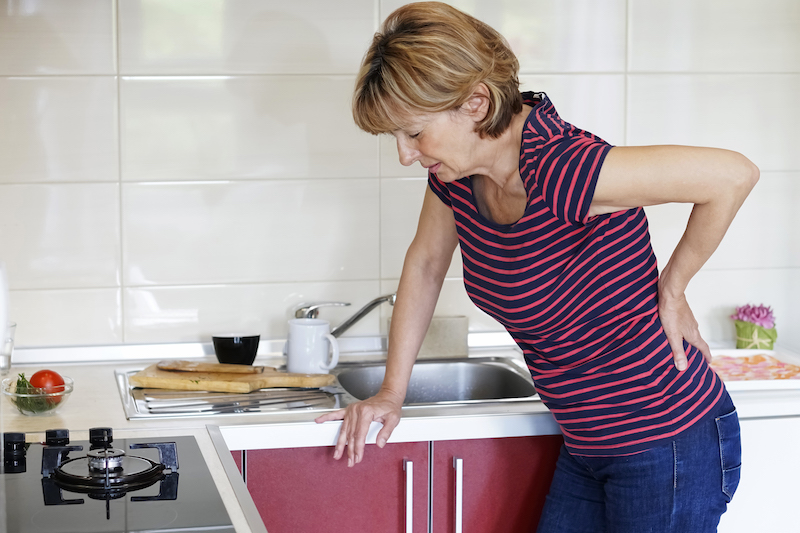 The painful area was limited to the distal region of the anterior femoral cutaneous nerve.  Four years ago it was an area about the size of a toonie. Now it is the size of her hand and extends across the surface of her kneecap. It looks very much like a case of peripheral neuropathy, but not what we usually see. Typically, peripheral nerve injuries due to compression or traction of neural bundles will result in loss of function due to ischemia. Remember that the endoneurium (the connective tissue sheath which envelopes each neuron) carries the capillary beds and lymph vessels. When blood flow to cutaneous nerves is impaired, paraesthesiae gives way to anaesthesiae; the trophic influence of autonomic fibres is lost, resulting in skin that is cool, dry, thin and hairless. Meralgia paraesthetica (involving the lateral femoral cutaneous nerve) is the classic example of this.

But that is not what is going on here. The skin over the affected area was intact, slightly discoloured, damp and warm. There was no loss of sensation. There was, in fact, a spiking amplification of sensation – that intense pain was distinctively initiated by the slightest of touch or even a hint of warmth or cold, or anything really. The differential diagnosis led me to conclude that Florence has a condition called causalgia.

The terminology has evolved since my days at chiropractic college, so I date myself by using that name for what she’s got. Now, her condition would be labelled as complex regional pain syndrome (CRPS). In the past, reflex sympathetic dystrophy (RSD) was the condition that affected whole limbs, while causalgia was limited in its area of distribution and defined by the particular peripheral nerve involved. Regardless, there is pain and autonomic dysfunction linked to CRPS, with varying degrees of sudomotor, vasomotor and trophic changes observed in the region.

A patient can develop CRPS as a result of a variety of trauma:

What causes CRPS? What is actually going on when I accidentally touch Florence’s knee and her head nearly explodes with the pain? I really want to know, so I began searching through medical texts and scholarly works on the subject. I found answers like “The cause of CRPS is not well understood” and “It is unclear why some get CRPS while others with similar trauma do not.” According to various articles and sources, CRPS is a “severe reaction,” “an abnormal response,” “a malfunction of the peripheral and central nervous systems.”

Well, I am quite certain that in order to understand the nature of a system that is malfunctioning, we first must understand how that system usually works. The system in this case is the nervous system and the function we’re concerned with is the reflex arc. I went back to the books, starting with a review of the histology of the peripheral nerves and the skin, as well as the physiology of the somatic and autonomic nervous systems, with specific focus on the sympathetic division. Along the way I was forced to refresh my biochemistry and even revisited the embryology of the nervous system. At some point I rediscovered the story of Melzak and Wall’s Gate Control Theory of Pain. Their work has, with some modifications, withstood the test of time. It was revolutionary in understanding how pain information is processed and perceived but not specifically helpful for answering my questions about reflexes and sympathetic dystrophy.

I ended up at an article from Dynamic Chiropractic (Oct. 31, 2000) by Dr. Keith Innes titled “The Autonomic Nervous System: Part Two.”  He clearly lays out a description of the trophic influence of sympathetic motor nerves and talks about the possibility of seeing local, regional or segmental patterns of sympathetic hyperactivity. Then he discussed this “stuck” positive feedback loop of somatic sensory and visceral motor activity in a way that exactly parallels the “stuck” muscle spindle loop in the somatic system – like what happens when a person’s back or neck “go out” or their shoulder seizes up.

When it comes to this kind of malfunction within the musculoskeletal system, we have a cure for that. We specialize in solving mechanical/functional problems; our particular approach can make a huge difference with how a patient recovers from their muscle spasms and joint issues and inflammation and suffering of all kinds.

But can we do anything to help a patient like Florence with her crazy knee pain? In the next issue, we will take a closer look at dysfunctional reflex loops and propose some ideas on how to possibly “fix” them.

DR. DAWN ARMSTRONG is a graduate of CMCC and has been in practice for over 30 years. She is currently focused on promoting life-long learning and professional development and has created a continuing education course – Clinical Record Keeping: A Hands-On Approach. Learn more at auroraeducationservices.ca.