Celebrating 100 years of chiropractic in Alberta 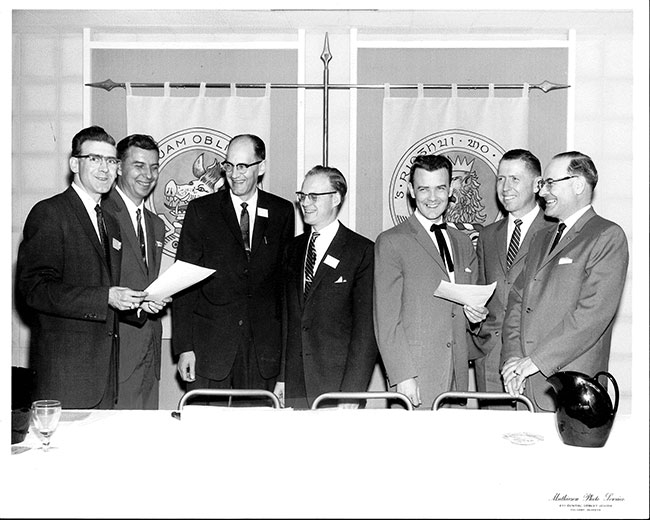 The Alberta College and Association of Chiropractors Council in 1961. Photo credit: ACAC Archive

Like many chiropractors practicing in the early 20th century, Dr. Murray Bowman had to face and overcome many challenges that younger generation of chiropractors today can only imagine.

One of the worst ones, Bowman recalls, was when his daughter, then in second grade, came home from school one day declaring that she can no longer walk to school with her friend Ian because Ian’s dad was a medical doctor and didn’t want his son associating with the daughter of a chiropractor.

“That’s how bad it was,” Bowman says. It was so bad that he discouraged his four children from going into chiropractic. As a father he did not want his children to experience the “agony” he had to go through as a chiropractor in those days. He is now 92 years old and retired since 2010, but the stories and memories from his 62 years in practice still linger.

Bowman attended the Centennial Gala celebrating 100 years of chiropractic in Alberta, held at the Calgary Commonwealth Centre last May. The Alberta College and Association of Chiropractors (ACAC) hosted the gala event commemorating this milestone. Formed in 1917, the ACAC was pioneered by 12 chiropractors in the province, and spearheaded the eventual legislation of chiropractic in Alberta, the first province in Canada to ever do so.

So much have changed since the early days, Bowman says, and all for the better. When he went to chiropractic school at Palmer College in Davenport, Iowa, he completed his program in 18 months. He would later realize as he started his practice that the chiropractic education he received was not sufficient.

“It was devoid, quite frankly. So I started taking post-graduate courses every time I had a chance and I promised myself I would take it at least every year,” says Bowman, who served as a Canadian Air Force pilot during World War II prior to enrolling in chiropractic college.

Today’s chiropractors are much more educated and now benefit from significant research that has been accomplished in recent years supporting the value of chiropractic care.

Dr. Metro Kuruliak is another old-timer, who has been in practice for 60 years – and still an active member of the ACAC. He acknowledges the chiropractic profession has come a long way in the last several decades.

“There has been a tremendous amount of recognition now from when I got started,” says Kuruliak, who still runs a chiropractic practice in Edmonton with his son Dr. Greg Kuruliak. He recalls the going rate for a chiropractic visit when he started his practice was $2, and the surveys indicated that only less than 10 per cent of the population knew anything about chiropractic.

“The recognition that we have now is just overwhelming compared to what it was before,” Kuruliak notes. “All we heard before were derogatory remarks.”

Progress
Chiropractors in Alberta agree the chiropractic profession in the province has progressed well from the low awareness rate to today’s relatively high chiropractic utilization rate, which is estimated at around 24 per cent – one of the highest compared to other provinces in Canada.

“Chiropractic in Alberta is strong and healthy,” says Dr. Chad Kulak, president of the ACAC. “Our economy took a dip recently, and it appears looking at our data that Albertans are coming in (for chiropractic visits) less often, but it’s not really hurting our utilization rate.”

Solid succession planning and a “robust” marketing strategy that is built around market research are the key pillars that the ACAC leadership is crediting for the profession’s continued growth in Alberta. To date, there are 1,070 active chiropractors in the province.

In his address at the centennial celebration, Kulak tells attendees the ACAC will ramp up efforts to continue to engage its members, especially with the hiring of its new CEO Sheila Steger, who officially assumed her role in the beginning of May.

Kulak stresses the importance of getting market insight through research that directs the association’s marketing strategy – and this research has consistently indicated that Albertans choose chiropractic care when they are in pain.

In addition to high utilization rate, the ACAC’s recent data also indicates that about two-thirds of Albertans have seen a chiropractor in the past.

The ACAC’s research-driven marketing strategy has been in place for 20 years and key to the continuity of that is effective succession planning in the leadership and administration of the organization.

“We have been fortunate to have a combined association and regulatory body, and our members believe that what is good for the patient is good for the profession,” says Dr. Clark Mills, a former president of the ACAC.

Succession planning is key, he adds. “We have worked hard to maintain a solid succession plan in our leadership and that has ensured us that a solid agenda can continue on even though the players will change.”

Advocates
Albertans have high respect for chiropractors, notes Judy Unterschultz, who sits in the ACAC council as a public member. In the last two years of working with the ACAC,
Unterschultz – who was the executive director of the Multicultural Heritage Centre in Stony Plain, Alta., for 25 years before retiring in 2015 – has been “very impressed with the chiropractic profession.”

“I’ve learned how educated, how dedicated, how committed this profession is to the patients. I’ve learned how passionate they are; there have been disagreements amongst members but that’s because they feel such strong passion for what they do,” Unterschultz says.

She believes the high utilization rate in Alberta is based on patients’ positive experience, as well as respect and confidence on the province’s chiropractors.

In the early years of their practice, when chiropractic was continuously under attack with negative publicity and by the medical community, both Kuruliak and Bowman focused on providing the best patient care and outcomes, which in turn benefitted their practices.

In fact, some of the patients who came to see Kuruliak for the first time came because they were so intrigued by all the publicity – albeit negative – they decided to give chiropractic a try as nothing else seemed to be helping their condition.

Two particular patients stand out in Kuruliak’s memory. “When they came in – after 30 visits with their medical doctor and still could not get any help – both of them were about to lose their houses because they weren’t able to work. When they came in I said, ‘Let’s look after you and get you well, so that you can save your house and maybe you can pay me.’”

“Each of them were able to get back to work within two weeks (of chiropractic treatment), and both of them paid their bills within a month – and then it snowballed. They were referring patients left and right to the extent that I was overwhelmed,” Kuruliak recalls.

Bowman has a similar story. A golf professional in one of the most popular golf clubs in town came to see him after he hurt his back and medical treatment was not helping. “In one week I had him up and walking and two weeks later he was back to work. He just flooded my office with patients because he had all the golfers – and that is how I got wired into the golf community.”

During those times when chiropractic was being undermined by negative attacks and misperceptions, when chiropractors were being referred to as “quacks,” the patients have been the profession’s biggest advocates and mainly because of the results they got from their chiropractic treatments.

“All these years because of this approach and because of helping these people – that was my first aim – it was word-of-mouth referrals that (made my practice take off),” Kuruliak says. At the Centennial Gala, Kuruliak received a special award as the ACAC’s longest serving member in its centennial year. The ACAC also announced it will rename its scholarship program after Kuruliak.

The Alberta College and Association of Chiropractors Council in 1961.

Gains
Perhaps one of the most significant changes over the last 100 years in chiropractic is in the perception of the health-care community. Where they were adversarial in the early days, the medical community today has been more willing to engage with chiropractors.

Kulak believes this has a lot to do with the patients. “The (medical doctors) are curious now. Patients now drive their health care more than they ever have. Patients used to be afraid to tell their doctor that they are seeing a chiropractor. I don’t see that as the case anymore. We have good relationships with medical doctors. They have a respect for us that one probably wouldn’t have imagined 30, 40 or 50 years ago.”

Kulak says for the next 100 years, the profession should work to find more ways to integrate and collaborate better with other health-care professions, “because this is where health care is going and this is what patients want.”

An initiative that took 10 years to achieve, this is a big score for the chiropractic profession in the province, considering the only other health-care professions added to the NetCare system – aside from medicine and pharmacy – are dentistry and optometry.

At the centennial celebration, Dr. Richard Brown, secretary-general of the World Federation of Chiropractic, congratulated Alberta’s chiropractors commending the ACAC for its efforts in raising awareness about and utilization of chiropractic in the province.

“Over the last 100 years, the ACAC has done what they do with love and inspiration,” Brown said, adding the ACAC should be looked at around the world as “an example of best practice on how to run an organization.”

Youngblood
As a new chiropractor just in the beginning of her career, Dr. Elaine Screaton acknowledges the challenges chiropractors face in practice today is “nowhere near what the older practitioners have gone through.”

“Back in those days they could have been arrested for practicing chiropractic and to me that is not something I have ever had to consider or worry about.

“Today in some ways we take for granted just how far we’ve come because we do work more closely with medical doctors and medical doctors would openly refer patients to us,” says Screaton, who currently practices as an associate at Synergea Family Health Centre in Calgary.

Kuruliak has some advice for his younger counterparts in the profession: patients first.

“Look at helping your patients first and foremost,” he explains. “If you help them, they’ll be happy, you’ll have a happy practice because patients will refer and everybody will be satisfied.”

As for Bowman, who saw great value in engaging with the professional community, he tells younger DCs to “get out out there and mix with other people.”

Other than that, Bowman feels the chiropractic profession has a bright future.

“When I look at tonight,” Bowman says during the Centennial Gala event, “I think it’s in good hands.”

Mari-Len De Guzman is the editor of Canadian Chiropractor magazine. You can reach her at mdeguzman@annexweb.com.
Print this page