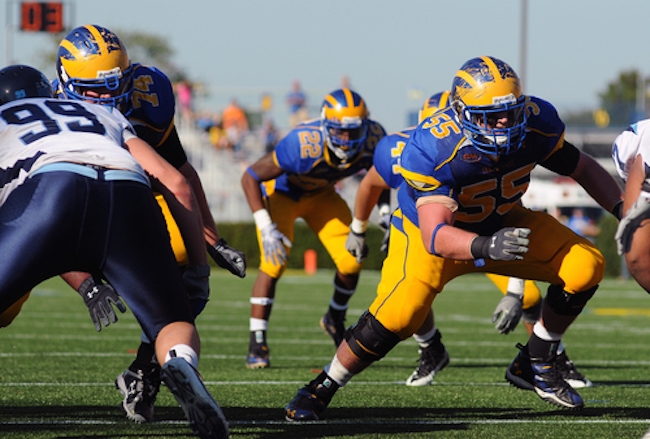 OTTAWA – The CFL may have a new commissioner but the league’s position on whether football head injuries are linked to brain disease hasn’t changed: there isn’t enough evidence to confirm the connection.

Commissioner Randy Ambrosie, a former CFL offensive lineman who replaced Jeffrey Orridge at the helm earlier this year, delivered the message at Friday’s annual state-of-the-league news conference more gently than his predecessor, but he maintained the stance that the science isn’t convincing.

“We know there are football players that have had CTE,” said Ambrosie. “It’s a terrible thing, that we’re not going to dispute.

“We have to follow the science and the science … is inconclusive. The cause and effect is unclear, it just simply is.”

It’s not a position the NFL shares.

In March 2016, Jeff Miller, the NFL’s top health and safety officer, acknowledged the link during a discussion on concussions convened by the U.S. Congress. It marked the first time a senior league official conceded football’s connection to chronic traumatic encephalopathy, or CTE.

But during Grey Cup week last November, Orridge bluntly stated “there’s no conclusive evidence at this point.” The CFL has been named in a $200-million class-action lawsuit over concussions and brain trauma.

“I have the greatest respect for our colleagues in the NFL … but my answer is not going to be that somebody else did it so we’re going to do it to,” Ambrosie said. “Mine will be we’re going to keep looking at all of these sources of data and try to be part of solution and ultimately come to a point where we understand it better.”

The strongest scientific evidence says CTE can only be diagnosed by examining brains after death, although some researchers are experimenting with tests performed on the living. Former CFL receiver Ken Evraire and Montreal Alouettes linebacker Kyries Hebert have joined the growing ranks of players to donate their brains for research.

Many scientists believe that repeated blows to the head increase risks for developing CTE, leading to progressive loss of normal brain matter and an abnormal buildup of a protein called tau. Combat veterans and athletes in rough contact sports like football and boxing are among those thought to be most at risk.

While he hasn’t seen enough evidence to be convinced concussions can lead to CTE, Ambrosie said he remains committed to making the game “better and safer for our players.”

“I believe we talk about a word, concussion, way too much and not about brain health,” Lewis said. “When will we stop selling safe when we know there’s nothing we can do to make the game safe?

“When will we start educating our players on brain health and rehab of the brain?”

Ambrosie replied: “What I can say is if we can do more on education we will … can we do more to educate the players? I’m sure we can.”

Ambrosie maintained he wasn’t being “blind to one side of the argument versus the other.”

In September, the CFL and CFL Players’ Association announced the elimination of padded practices during the regular season and the addition of an extra bye week in 2018 to give players more recovery time. When told of Ambrosie’s concussion comments, union president Jeff Keeping said a priority for the organization is improving player safety.

“We’re definitely not doctors and not scientists but when we look at this and talk about player safety, we recognize that hitting your head any amount of times repetitively isn’t good for you,” he said. “What we’re looking at and will continue to work on is any measure we can take to make the game safer.

“That started with removing padded practices. We understand the sport is a collision game … but at the same time if there are opportunities to reduce risk we want to take those.”

Last summer, researchers in Boston released results of a study on the brains of 202 former football players. They said they found evidence of CTE in 177 of the brains studied, including in seven of eight CFL players.

The report didn’t confirm the condition is common in all football players; it reflected high occurrence in samples at a Boston brain bank that studies CTE. Many donors or their families contributed because of the players’ repeated concussions and troubling symptoms before they died.

Ambrosie, who became commissioner in July, said he’ll continue to come down hard on CFL players who use their heads to make tackles.

“I hate (handing out disciplinary fines), fine days are just not fun,” he said. “But the one thing I said I’m going to fine on and be super-tough on is head shots.

It’s certainly been a whirlwind introduction to the job for Ambrosie.

He also reduced team challenges to one per game in mid-season, fast-tracked the CFL’s “Diversity is Strength” campaign as a response to social unrest in Martinsville, Va., and stepped in to prevent Hamilton from hiring controversial former Baylor head coach Art Briles. Additionally, Ambrosie ruled former NFL quarterback Johnny Manziel could remain on the Tiger-Cats negotiation list until Nov. 30 to meet certain Ambrosie-stipulated conditions before he could be offered a CFL contract.

“We have a process in place now and I don’t care whether it takes another month, three months or five months,” he said. “Nobody gets into the game until they fulfil the criteria that’s set out by experts.