This is my favourite piece of equipment from the archives. It’s both elegant and curiously archaic looking as well as a mystery as to how it operated and what it was intended to do. There are only three things we know for sure:

This is my favourite piece of equipment from the archives. It’s both elegant and curiously archaic looking as well as a mystery as to how it operated and what it was intended to do. There are only three things we know for sure:

1. It is deceptively heavy though not particularly large (it sits on a wood-framed, marble base).

3. It was intended to generate sine waves. The only surviving note that we have identifying the instrument states that it is a “therapeutic current AC-DC generator/high frequency static generator.” The device has a setting dial labelled “No. 2 Polysine Generator.”

The mechanical housing to the upper right appears to be a generator. A red-tinted light bulb flanks the generator and is presumably there to indicate the strength of the current. On the other hand, it could only be there for show.

The machine is identified as manufactured by McIntosh, Chicago. No date of manufacture is given, though my guess would be 1920s or earlier.

I’d be greatly appreciative if our readers could contact me and give some insight into how this machine worked, what its intended therapeutic use was and some better idea of its age. I may be contacted at szoltai@cmcc.ca .

An “A” goes to Dr Tim Kunkel for his response to the Chiropractic History
Assignment in our September issue! 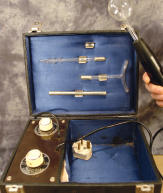 Dr. Tim Kunkel thinks he has the definitive answer to Photo 1 in our September Chiropractic History Assignment. The reason he thinks he recognizes the unit is that he has two of them. Apparently they are oscillating condensators. He had two portable versions of them custom built in India while he was there studying acupuncture and homeopathy in 1978. They were built in New Delhi through the Mahatma Gandhi Ashram Institute.

The unit consists of argon-filled tubes of different shapes that attach to a hand- held device. Once the unit is plugged in, the electrical current activates the argon in the tubes and the gas in the tube will glow purple like Luke Skywalker’s light sabre. (“Let the Innate Force be with you,” quips Dr. Kunkel.) When the tip of the attachment is brought close to the affected area it will create an electrical arch which, he assures me, was not entirely painless.

The flat-headed, bulbous attachment shown in the hand-held unit was used to treat skin disorders such as acne and psoriasis. The pointed attachment at the top of the case was the most frequently used and was used for trigger point therapy, acupuncture-type treatments  as well as such diverse uses as relieving the swelling in goiter and to activate nerves in patients with MS. The third attachment was designed for para-spinal musculature while the metal tube at the bottom is for reactivating the gas if the tubes had been unused for some time. The upper dial is for intensity, the lower is for current.

Dr. Kunkel has donated the unit to the library and it is now on display in our museum exhibit. For helping to clear up this mystery I think Dr. Kunkel deserves an “A” for his chiropractic history assignment.

Steve Zoltai is the collections development librarian and archivist for CMCC and was previously the Assistant Executive Director of the Health Sciences Information Consortium of Toronto. He has worked for several public and private libraries and with the University of Toronto Archives. Steve comes by his interest in things historical honestly – he worked as a field archeologist for the Province of Manitoba. He can be contacted at szoltai@cmcc.ca .