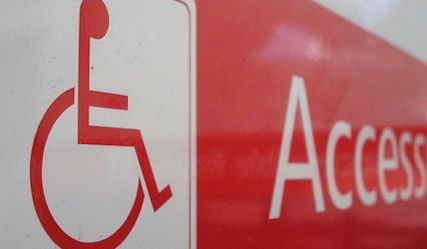 A new report from the Conference Board of Canada shows improving physical accessibility in workplaces and communities for people with disabilities would result in a dramatic increase in labour force participation and consumer spending.

The findings from the Conference Board of Canada focused on people with physical disabilities, a population group comprising an estimated 2.9 million Canadians that’s expected to grow to 3.6 million by 2030.

The Conference Board says consumer spending from that demographic currently contributes about 14 per cent to Canada’s Gross Domestic Product, but adds that figure could be much higher if people with disabilities faced fewer barriers to participating in the workforce.

They say if businesses were to make a concerted effort to become more inclusive, both by making physical environments accessible and adjusting their attitudes toward the disabled, the economic impact for the country would be significant.

The research estimates the number of people with physical disabilities in the workforce could climb by 15 per cent, which could add $16.8 billion to Canada’s GDP by 2030.

Advocacy groups say governments and businesses should view the findings as a call to action, adding that bolstering the bottom line through greater inclusion will also address fundamental human rights.

“Wake up, Canada,” said Rick Hansen, the paraplegic athlete and advocate whose eponymous foundation commissioned the Conference Board research. “This is an opportunity that we can’t afford to miss, and we need to do it now.”

The Conference Board said it arrived at its findings by combining its own original research with the Statistics Canada survey on disability, last released in 2012.

To supplement Statistics Canada’s work, the board had polling firm Leger survey 497 Canadians with disabilities in an online questionnaire conducted between Feb. 15 and 24, 2017. The polling industry’s professional body, the Marketing Research and Intelligence Association, says online surveys cannot be assigned a margin of error as they are not a random sample and therefore are not necessarily representative of the whole population. Leger is an accredited member of the association.

The research said Canada’s physically disabled population is currently on track to grow at double the pace of the national average, highlighting the potential spending power of a group that’s chronically underemployed. Figures from various bodies including Statistics Canada consistently show that only about half of eligible people with disabilities are able to find work compared to roughly 80 per cent of able-bodied peers.

The Conference Board said removing barriers to employment would not only tackle this problem, but increase the amount of money available to this rapidly growing demographic and give newly empowered consumers more places to spend it.

Increasing accessibility in workplaces would benefit not only the people who work there but the people who patronize the businesses, Hansen said, adding the research figures would be even higher if people with neurodevelopmental or mental health disabilities were included in the tally.

Matthew Stewart, study co-author and Conference Board director of economics, estimated that companies that step up their accessibility efforts could not only contribute to Canada’s prosperity, but address a persistent problem plaguing the business world.

“We keep talking about labour shortages, how companies are having more and more difficulty finding qualified staff,” he said. “This is a group that is underemployed and can make a significant contribution to the economy.”

That’s been the case for Sedexo Canada Ltd., a global food and facilities management company with 10,000 employees in Canada.

Vice-president of corporate affairs Katherine Power said ever since the company committed to hiring and supporting more people with disabilities roughly eight years ago, they’ve seen concrete improvements such as lower turnover rates, client satisfaction and workplace safety. Sedexo is hoping to hire an additional 200 disabled employees this year, she said, adding that target will keep increasing for the foreseeable future.

“I’d like to say we’re doing it out of the goodness of our hearts because it’s the right thing to do, and it is all those things, but that’s not what drives a private-sector company to make a decision like this,” she said. “We’re really doing it because it makes total sense from a business perspective and we see that in our results.”

Stewart noted that businesses have historically balked at the perceived cost of upgrading physical premises or implementing staff training, but said the numbers indicate the financial benefits would ultimately outweigh those expenses in the end.

Kyle Rawn, senior consultant with Accessibility Professionals of Ontario, agrees. As an adviser to businesses hoping to improve their accessibility, Rawn frequently encounters reluctance to shell out for upgrades.

But not all solutions need to be expensive, said Rawn, who is totally blind.

While retrofitting buildings with ramps and handrails can add up, he said other steps such as ensuring adequate lighting and removing obstacles from high-traffic areas can all contribute to a more inclusive environment.

He said some businesses will resist the call to action, adding enforceable government legislation and accountability measures will be key to ensuring lasting change.

For businesses that get on board, however, Rawn said they must also look beyond physical environments and ensure the people who work there understand what accessibility means.

“You could have the most accessible buildings in the world, but yet if you have people who are working there providing goods and services who have poor attitudes or don’t realize what they need to do to be an inclusive business, then it’s kind of all for naught.”