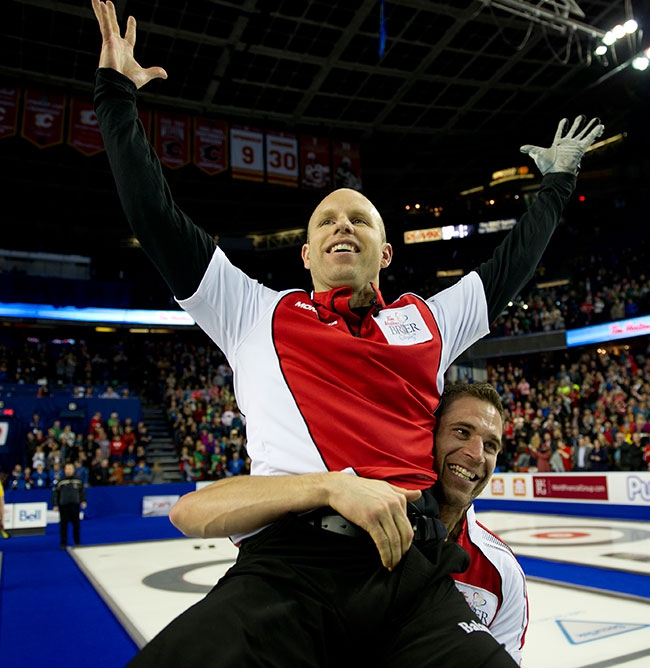 You may know Pat Simmons as the top-flight curler who helped Team Canada win the 2015 Tim Hortons Brier, the annual Canadian men’s championship. But he’s not only an elite athlete. He’s also a successful chiropractor.

Simmons is partner in Crescent Park Chiropractic Centre in Moose Jaw, Sask. He provides chiropractic care part time in nearby Gravelbourg, too.

Simmons’ profile as a curler reached a new level this year when his team made a bold decision at a strange time: right in the middle of the Brier, they suddenly promoted Simmons from third to the skip position.

“We had just been beaten by Saskatchewan and it wasn’t looking good,” he recalls of the high-stress situation. Team Canada had to do something fast or they’d be eliminated.

The decision was controversial. “No one in their right mind would change their positions, especially at the back end, during the biggest event of the year,” Simmons says. Nonetheless, it was the right move. With Simmons throwing rocks and providing direction, the team won the tournament.

“We’ll probably never see something like that again. But we recognized it had to be done.”

How did Pat Simmons come to this point as skip of two successful – yet clearly distinct –careers? His work on the ice and in the clinic both relate to his personal history. He had parents who loved curling; and he was in a vehicle accident that sparked his interest in the profession.

Born to curl
Simmons grew up on a farm outside of Moose Jaw. His parents, both curlers, introduced him to the game when he was just nine years old. Later on, when Simmons was in high school, they became more involved in the sport.

“For a farmer, winter is obviously a slow time,” Simmons says. “So for a number of winters, my parents moved into town and managed the Hillcrest Curling Club.”

The winters his parents managed the club gave Simmons plenty of practice. During summers, he helped out on the farm. That’s when he had the accident: driving a four-wheeled motorcycle up a steep hill, he flipped the vehicle over and sprained his lower back.

Chiropractic care helped him recover. Once he did, he continued to hone his curling game. And soon, he was competing at a high level. Throughout the 1990s, he played in a number of provincial championships for junior teams, winning a few.

Meanwhile, the teenage Simmons started to think that a career as a chiropractor might be right for him.

“I was always interested in science and later, health. I knew I wouldn’t be a medical doctor, not liking needles and blood. That narrowed it down. And I had good experiences with chiropractors when I was young. It was a combination of things that led me in that direction.”

After graduating high school, Simmons studied for three years at the University of Regina – a pre-chiropractic program. He also continued to curl, boosting his game. In 1994 and 1995, his rink, Team Cursons, won the provincial juniors, garnering spots in the Canadian Junior Men’s Curling Championship in those years.

Broom down
Also in ’95, Simmons was accepted into Canadian Memorial Chiropractic College (CMCC). That’s when chiropractic study took precedence. He still curled, but only one night a week – no big competitions.

“For the first couple of years of college, there was no way I could have done more. The academic schedule was too heavy.”

He came to realize early in his program that the best way for him to gain experience was to run a clinic he owned. Ownership would also enable him to practice in hometown Moose Jaw, where he wanted to settle down.

“By my second or third year of college, I was already having talks with the clinic that I partner in now.”

Simmons graduated from CMCC in 1999 and immediately got to work at the Crescent Park clinic alongside partner Jeff Reihl.

“My partner went on a week’s holiday the first day I started, so it was right into the fire,” Simmons notes. But if that difficult week scarred him, he doesn’t show it. In fact, no more than a year later, he piled yet more work onto his schedule by starting chiropractic service at the Gravelbourg Health Centre, about an hour away from Moose Jaw. He spends a day a week there.

While developing his business, Simmons also developed his game. He skipped four champion Team Saskatchewan curling crews from 2005 to 2008, winning the provincial championship each year. They also aimed for international success, qualifying for the Canadian Olympic Curling Trials in 2009 – but they didn’t win a spot at the Olympics.

In 2012, Simmons started to play with a team based at the Glencoe Club in Calgary. He took an apartment in that city to be closer to his new teammates. He credits Cindy Simmons, a competitive curler who also happens to be his wife, with managing the Moose Jaw household during his absences. Simmons also thanks Reihl and others at the clinics for covering.

“Moose Jaw is a small enough community that everyone knows what I do. They see me on TV and they understand why I’m not in the office.”

In 2012, after Simmons and his crew won the Alberta championship and became known as Team Alberta, they placed second in the Brier. And in 2013, they competed in the Canadian Olympic Curling Trials, but as when he played for Saskatchewan a few years earlier, Alberta didn’t win a spot at the Olympics.

Still, the Brier wins kept coming: Team Alberta won in 2014. And in 2015, known as Team Canada (Brier winners go on to represent the country in the world championships) they promoted Simmons to skip mid-tournament.

Rock-solid time management
Time management is crucial to Simmons’ success at the clinic and the rink. He builds sports training into his workdays.

“In winter, I’ll run out during lunch, grab a quick bite to eat and then head to the rink to throw a rock. I know if I don’t do it then, it’s probably not going to happen. In the summer, the gym sessions kick in.”

Home support is critical. Cindy, his wife, actually quit competitive curling a few years ago because Simmons’ schedule was so tight, leaving next to no time for household management. “Things were getting crazy,” he says, noting that his life also involves raising children: Makena (10) and Max (8).

As for his chiropractic life, it’s more than a profession for Simmons. It’s also a treatment that he uses to stay healthy.

“Sprain and strain type injuries are common with curling, both from the load of delivery and sweeping throughout the body, especially joints such as knees and hips. I do receive regular chiropractic treatment for all of the above – new and old injuries sustained from on-ice and off-ice training, and for maintenance of good physical overall health.”

Does being a curling champ make a difference in his business? “It probably doesn’t hurt but I don’t know the true answer,” Simmons says. “I know people love talking about it when they come in. Out west, curling is second nature. Every rural centre has a curling rink. As much as it hurts me to be away from my family and the business, it probably hasn’t hurt to have a bit of success from the curling side of my life.”

Had Team Canada lost at the Brier earlier this year, Simmons and his teammates may have decided to shelve their rocks and brooms. But the win has encouraged them to keep competing. They plan to play in the Home Hardware Canada Cup of Curling in December, and in the WFG Continental Cup in Las Vegas in 2016.

They may go even further. “We’re not saying that we’re committed to another three years of the Olympic cycle, but I can see there’s a possibility of us hanging in there and seeing if we can get hot at the right time for the Olympic trials,” Simmons says. “In the meantime, our big circle on the calendar is the Brier.”

That’s in Ottawa, March 5 to 13, 2016. If you decide to go, be sure to cheer loudly and proudly for Simmons, a fellow DC battling on the ice.

Stefan Dubowski is a freelance writer based in Ottawa. You can reach him at dubowski@stiffsentences.com.