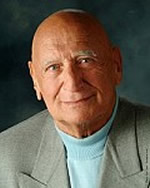 Dr. Gold’s influence on the profession began in 1957 when he graduated from

Palmer School of Chiropractic.  Following graduation he moved to Spring Valley, New York and began teaching at the Columbia Institute of Chiropractic and later at Sherman College of Straight Chiropractic. He also who went on to receive an advanced Ph.C from Palmer College in Davenport in 1961. His lectures spanned chiropractic colleges around the world and generations of doctors.

His lectures, videos, and presentations demonstrate that he was a master of communication. He developed techniques to explain chiropractic to lay people with ease and beauty. A beacon of information about the benefits of chiropractic, he worked diligently at debunking the misconceptions about chiropractors. His “Chemistry of Life” lecture helped thousands of chiropractors articulate that we are so much more than back doctors.

Dr. Reggie Gold is survived by his wife

Dr. Irene
Gold, also a great contributor to our profession. She started her medical career as an RN, then after marrying Reggie she graduated from Columbia Institute of Chiropractic in 1974. The next year she started her famous National Chiropractic Board Reviews, helping a large portion of the chiropractic professionals prepare for licensure.

A generous man, who shared his skill, ability and expertise with the chiropractors world-wide, Dr. Gold also supported the profession financially. In 1994 he contributed $125,000 to

Sherman
College of Straight Chiropractic – at the time it was the largest single donation in the school’s history. When asked about the 1994 donation he stated, "Everything I have, everything I hope to have, everything I am or ever hope to be, I owe to chiropractic."
Dr. Gold is also quoted as having said: "When I go, I want people to say I did all I could with all I had."

Through websites, social media and emails, chiropractors from all over the world have already poured out their sympathy and prayers to the Gold family and have expressed how much of an inspiration this “chiropractic rudder” had been to them and so many others. Their stance on his passing?: DCs across the profession are committed “to take up the torch” and continue in the spirit of Dr. Gold’s passion for the profession.