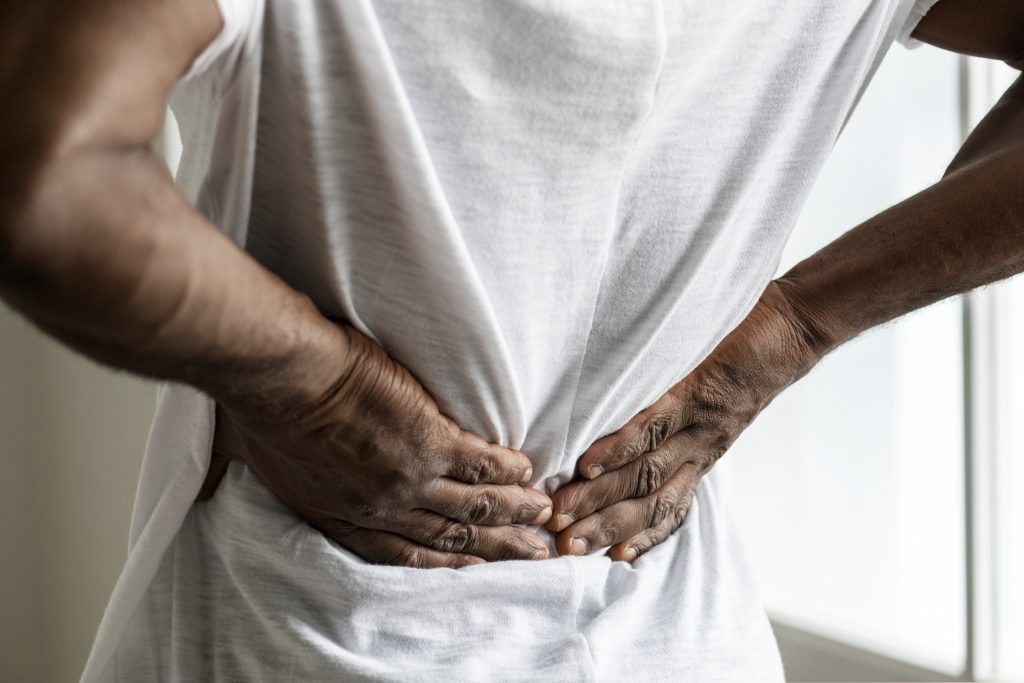 Low back pain is the leading cause of disability worldwide and is becoming more common as our population ages. Most people who have an episode of low back pain recover within six weeks, but two-thirds still have pain after three months. By 12 months, pain may linger but is usually less intense.

Still, recurrence is common and in a small number of people it may become persistent and disabling. Chronic back pain affects well-being, daily functioning and social life.

A series on low back pain by the global medical journal The Lancet outlined that most sufferers aren’t getting the most effective treatment. The articles state that recommended first-line treatments – such as advice to stay active and to exercise – are often overlooked. Instead, many health professionals seem to favour less effective treatments such as rest, opioids, spinal injections and surgery.

So, here’s what evidence shows you need to do to improve your low back pain.

Risk factors for low back pain

People with low back pain should see a health professional to rule out the more serious causes of pain such as fracture, malignancy (cancer) or infection.

Once patients are cleared of these, the current guidelines from Denmark, the UK and the US advise self-management and psychological therapies as the initial response for persistent low back pain. These include staying active, doing appropriate exercises and undertaking a psychological program to help manage the pain.

Exercises such as Tai Chi, yoga, motor control (to restore strength, co-ordination and control of the deep core stabilising muscles supporting the spine) and aerobic exercises (such as walking, swimming, cycling and general muscle reconditioning exercises) are recommended.

If any of these therapies fail or stop working, the guidelines point to manual and physical therapies such as spinal manipulation (Denmark, UK, US), massage (UK and US) and yoga and acupuncture (US) – particularly for low back pain lasting more than 12 weeks.

The guidelines are based on many studies that have shown the benefits of exercise and psychological therapies. For instance, a 2006 study compared pain levels across two groups of physically active people with chronic low back pain.

Participants who followed a four-week program using Pilates exercise equipment reported a more significant reduction in pain and disability than those in a control group who received usual care (consultations with a health care professional as needed). The benefit for the exercise group was maintained over a 12-month period.

Another, 2011 trial explored the benefits of Tai Chi for those with persistent low back pain. Participants who completed a ten-week course of Tai Chi sessions had less bothersome back symptoms, pain intensity and self‐reported disability, compared with a control group who continued with their normal medical care, fitness or health regimen.

Chronic pain is linked with chemical and structural changes at all levels of the nervous system. These include the level of neurotransmitter changes that alter pain modulation, and sensitisation of the nerves involved in transmitting pain signals. Incoming pain signals can be modified by our response to persistent pain.

Psychological treatments – such as mindfulness-based stress reduction – focus on increasing awareness and acceptance of physical discomfort, as well as challenging emotions often associated with chronic pain.

In a trial including 342 participants, around 45% of those who had completed eight sessions of cognitive behaviour therapy or mindfulness-based stress reduction had clinically meaningful improvements in bothersome pain at 26 weeks of follow-up. This was compared to only 26.6% of people who had received usual care.

In Australia, physiotherapists, chiropractors and osteopaths use manual and physical therapy to treat lower back pain. The treatments often include some form of spinal manipulation and massage, as well as advice to stay active and do exercises. This is consistent with The Lancet’s recommendations, also based on evidence from studies.

A 2013 trial of people with acute low back pain compared the effects of spinal manipulation with those of the non-steroidal anti-inflammatory drug diclofenac (Voltaren) and placebo on their pain. Spinal manipulation was found to be significantly better than diclofenac and clinically superior to placebo in reducing disability, pain and the need for rescue medication. It was also found to improve quality of life.

Similar results came from another study of 192 people with low back pain that lasted around two to six weeks. Participants were randomly allocated to one of three groups: chiropractic manipulation with a placebo medication; muscle relaxants with sham manipulation; or placebo medicine with sham manipulation. All subjects improved over time, but the chiropractic group responded significantly better, with a bigger decrease in pain scores, than the control group.

Physiotherapists, chiropractors and osteopaths are required by law to be registered with the Australian Health Practitioner Regulation Agency (AHPRA) to practise in Australia. To be registered, a person must complete a minimum of four years’ study at a university in a degree that includes a focus on non-pharmacological (drug-based), non-surgical management of musculoskeletal conditions, including low back pain.

Under the government’s Chronic Disease Management Plan patients with persistent low back pain may be referred to physiotherapists, chiropractors or osteopaths for evidence-based therapies such as spinal manipulation and massage. If patients are unfamiliar with these therapies, they can discuss referral with their GP.

Physiotherapists, chiropractors and osteopaths can also be consulted without referral. Their services are usually covered by private health insurance. The AHPRA website lists registered practitioners in your area.

One thing to look out for when you see a practitioner is the number of treatments they recommend. Patients usually start with a short course of two to six treatments to see if the treatment helps. It shouldn’t take many treatments for a change in symptom pattern to become obvious.

The message to the public and to health professionals is clear. People with non-specific low back pain need to learn how to independently manage their pain while remaining active, staying at work and maintaining their social life as far as possible.

Sandra Grace is an academic member of Chiropractic & Osteopathic College of Australia Research Ltd and a member of Osteopathy Australia.

Subramanyam R Vemulpad is an academic in the Department of Chiropractic, Faculty of Science Engineering at Macquarie University.