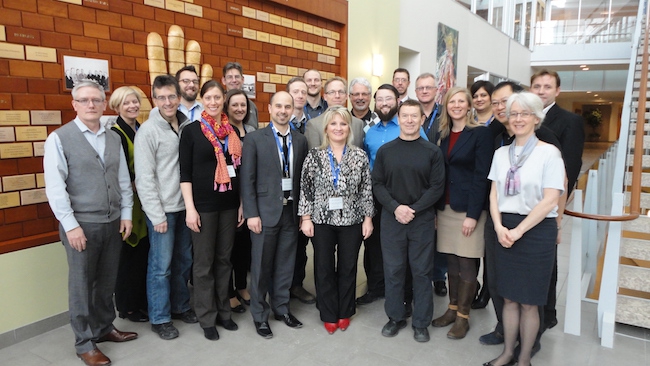 Members of the CCGI Opinion Leaders group during the first Training Day held at the CMCC last February.

The Canadian Chiropractic Guideline Initiative (CCGI) is ramping up efforts to deliver evidence-based clinical practice guidelines and best practice recommendations to chiropractors across the country.

The identification of 18 opinion leaders earlier this year – tasked to help disseminate and implement best practice recommendations and clinical practice guidelines to practitioners – is one of CCGI’s most recent undertakings to get the evidence closer to the grassroots.

This roster of opinion leaders include representatives for each jurisdiction in Canada, acting as a resource for practitioners with questions about the clinical guidelines and others relating to evidence-
informed practice.

“We went through a formal process to identify 18 opinion leaders – roughly two per province – who would help with the initiative,” according to Dr. André Bussières, CCGI project lead and assistant professor at McGill University’s school of physiotherapy and occupational therapy in Montreal.

The 18 opinion leaders – from nine provinces – were selected out of 82 names submitted by stakeholders for consideration. These chiropractors are: Greg Kawchuk, Chad Kulak and Clark Mills from Alberta; Clark Konczak and Jeffrey Quon from British Columbia; Mark Perrett and Greg Stewart from Manitoba; Daniel Comeau and Norm Skjonsberg from New Brunswick; Debbie Brake-Patten and Darrell Wade from Newfoundland; William Smith from Nova Scotia; Ayla Azad, Shawn Thistle and Anthony  Tibbles from Ontario; Danica Brousseau and Philippe Larivière from Quebec; and David Whitty from Prince Edward Island.

These leaders play an important part in the CCGI’s strategy to help “transform the culture of the profession to one that is guided by evidence-based practice,” by providing tools and resources to help the opinion leaders achieve their objectives.

“If they can relate to someone like me, it makes it easier for them. Seeing that people like me have a busy practice. I have a very successful clinic and it’s evidence-based. It’s not like it’s hindering me… I have always been evidence-informed,” Azad notes. That empathy is important in engaging other chiropractors and elevating awareness about the clinical practice guidelines.

Azad is also an instructor at Canadian Memorial Chiropractic College (CMCC), which makes for an ideal platform for her opinion leader role.

“I get the chiropractors before they are even chiropractors, because I teach students,” she says. “One of the things that I have made a very conscious effort to do is… talk about clinical practice guidelines and why they are so critical to look at as a resource to help ensure your patients get the best possible treatment.”

User-friendly
Through its website, the CCGI offers resources for chiropractors, patients and other health practitioners on various musculoskeletal conditions. The scope of the Guideline Initiative, as indicated on its website, is limited to conditions commonly seen by chiropractors, including adult spinal and extremity disorders, headache, pediatric conditions, like scoliosis, and pre-specified objectives, such as assessment and treatment of low back pain.

Those who have been on the CCGI website, which was launched in September 2014, find it to be user-
friendly and the information contained in it easily digestible. Azad, for one, uses the website to talk patients through the guidelines on specific conditions. The process, she says, doesn’t take very long but patients walk away with renewed confidence that “we have science behind what we do.”

Bussières says the website has been designed for consumption by both clinicians and patients. “The information is tailored to the need of each of these groups.”

“It’s in response to the need of the profession for finding credible information, and our goal was to be able to centralize this and make this as easy as possible for clinicians to find,” Bussières explains.

The initiative provides practitioners with an alternative to the way they search for and consume the latest evidence in chiropractic care, according to Thistle, also a CCGI opinion leader from Ontario.

“Part of the benefit of this initiative is that our colleagues in the field will realize there are personal resources that they can tap into to get information about best practices and clinical practice guidelines,” Thistle says. “It doesn’t always have to be through a journal… There are more intimate ways to get to the research.”

In addition to his regular practice, Thistle is also actively involved in the research scene. He is the CEO and founder of RRS Education (formerly, Research Review Service), which provides services that help practitioners integrate research evidence into their practice. His work with RRS Education makes him ideal for the opinion leader role.

Thistle says chiropractors’ views on research vary widely and individual practitioners relate to research in different ways. “As a profession, we have a bit of a mixed bag in terms of how we interact with research or how we think it can influence our practice or our patient care.”

Views of practitioners toward research evidence vary from “pure intimidation and ignorance all the way to over-interpretation or misinterpretation,” he says.

The CCGI aims to standardize the way the evidence is presented to clinicians to facilitate knowledge translation, Thistle says, adding that the overarching goal is to efficiently translate research into practice and help doctors apply it to patient care.

Chiropractors may differ in how they interact with research, but one thing is for certain: a large majority of practitioners are in favour of following an evidence-informed practice, according to Bussières.

Studies have shown that only less than 20 per cent of the profession “hold on to views that are more historical,” the CCGI project lead notes. “The remaining larger proportion are actually quite in favour of evidence-based approach and are motivated to also learn more about this.”

One such chiropractor is Dr. Adam Wade, who owns Chiropractic on Main in Newmarket, Ont. Wade has been in practice for seven years and has always maintained an evidence-informed practice.

He finds clinical practice guidelines as a great way to keep his practice on top of the latest evidence in chiropractic care. Having information that has already been vetted by trusted entities, like the CCGI, is very important for his practice.

“The guidelines are great because it’s a culmination of research,” Wade points out. “It’s not just, ‘This research paper says this,’ it’s, ‘Here’s 30 research papers that are all good studies and based on them and based on symptoms, here’s the treatment you should do based on the best evidence you have to date.’”

Sharing the evidence
Expanding the reach of the clinical guidelines beyond chiropractic clinicians and patients is another goal of the CCGI and its opinion leaders. Other health-care practitioners are also encouraged to utilize the guidelines and best practice recommendations, as many of the conditions outlined in the CCGI scope are the same conditions seen by other practitioners.

It’s one of the first things Comeau and his colleague, Skjonsberg, did in their new role as opinion leaders in New Brunswick.

“The information contained within the CCGI guidelines is transprofessional,” Comeau says. “It’s information that is good for the physiatry and orthopedic surgeon community.”

Since coming back from the first CCGI opinion leaders workshop held early this year, Comeau and Skjonsberg have been disseminating the information about the clinical guidelines to chiropractors in New Brunswick – through the New Brunswick Chiropractic Association – the patient community and other health-care professionals, including the New Brunswick Physiotherapy Association.

The information was also shared with personal injury lawyers as well as the chief medical officer for WorkSafe New Brunswick, the province’s workplace compensation board.

“Research is research no matter what your profession is,” Comeau says. “Our goal was not only to disseminate the knowledge to chiropractors but to all frontline health-care providers, family doctors, nurse practitioners – everybody who sees patients who might fall under the guidelines.”

And why not? He adds, “The best clinical practices and guidelines for chiropractors are the same as it will be for any other health-care provider.”

Sharing the evidence will only further increase the level of interprofessional collaboration among health-care practitioners  for better patient care.

“We have a responsibility as health-care providers to provide patients with the highest level of care,” Comeau says. “And that is something that is only accomplished through continuing research and education, and using the best clinical practices and guidelines. And the best clinical practices and guidelines for chiropractors are the same as it will be for any other health-care provider.”

While the clinical guidelines and best practices offer insights on assessing and managing the various conditions that fall under the chiropractic scope based on the best available evidence, the opinion leaders stress they can only serve as a guide and that the reality is that doctors will often take these guidelines and consider them within the context of their own experiences as clinicians and patient preference.

That is how Wade, the Newmarket chiropractor, views it as well. “The key with research is… here is the evidence, but it doesn’t mean it’s the be-all and end-all.

“It helps to have a lot of tools in the toolbox. No two patients respond to the same things the exact same way… So having more tools with research to back them up is great. If something doesn’t work, you can try something else.”

Patient education about the evidence is important as well, Wade notes.

Building capacity
Although chiropractic research has grown tremendously in the last decade, observers in the profession believe more needs to be done in this arena. According to a survey published in 2009 in the Journal of the Canadian Chiropractic Association, only less than one per cent of the profession is conducting research on a fulltime basis to provide evidence for chiropractic patient care.

“It’s important that we build capacity in order to address some important clinical issues, and shools are actively working to be able to develop these expertise,” says Bussières, who was one of the co-authors of the 2009 study.

The good news is that capacity is slowly building up. The CCGI is currently developing an agenda that will enable it to promote research among students at the CMCC and Quebec’s chiropractic school at l’Université du Québec à Trois-Rivières, where Bussières also teaches. The hope is to promote the value and importance of research among chiropractic students so when they graduate, they will be inclined to either pursue research as a profession or participate in research-related initiatives, such as the practice-based research network.

“The importance of conducting high quality research and nurturing younger researchers is key for the future of the profession,” Bussières says.

Cultivating an evidence-based practice will only serve to elevate the chiropractic profession and increase its credibility in the health-care community, Azad says.

“Chiropractors are no longer in isolation… We are working with many different health-care providers, that is what is happening now. Everything is becoming evidence-informed. If we don’t do this, we’re going to be  left behind.”