From practice to publication

Little miracles happen every day
in practice – and they go on by, whisked away into history to be lost
forever. How many of you see this in practice, followed by a moment of
desire to share these miracles with the rest of the world?” 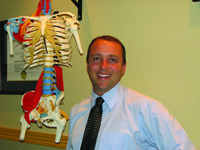 Little miracles happen every day in practice – and they go on by, whisked away into history to be lost forever. How many of you see this in practice, followed by a moment of desire to share these miracles with the rest of the world?”

Dr. Jerome Fryer, a chiropractor currently practising in Nanaimo, British Columbia, firmly believes that the successes which independent DCs achieve in their clinics need not remain local anecdotes shared among friends and colleagues in relatively casual settings. He feels that if the clinician desires, these ideas and successes can be taken to the next level – into the realm of research for publication, to join the annals of knowledge that fuel the growth of the profession.

However, Fryer realizes that DCs often find the prospect of taking their findings outside of their practices daunting, to say the least. The time and financing required to design studies, plan for travel or equipment, hire research assistants and/or network with practitioners in other disciplines – if these become necessary – collect and analyze data, write up the paper, submit the work for publication and revise the text according to the requirements of the various editorial boards, can make an independent research effort seem like an impossible undertaking.

“But, there is nothing more important to the building of this profession,” notes Fryer.  “We must document our miracles. Chiropractic is built on a scientific foundation.”

“We highlight chiropractors in universities,” continues Fryer, “but I think we are all scientists in our day-to-day practice. I hope to inspire provincial associations to encourage their members to write about their successes. Ultimately, it will move us forward.”

Dr. Fryer has spoken to various groups of DCs about how he has taken his own ideas to the next level, publishing them in a reputable medical journal. He now shares this journey with Canadian Chiropractor. While he acknowledges the achievements and impact of university-based chiropractic science, he notes that chiropractic research is not out of reach to the independent chiropractor who wishes to communicate with the scientific community at large.

THE ORIGIN OF THESES
Dr. Jerome Fryer obtained his doctorate degree in chiropractic, graduating with honours, from Western States Chiropractic College in Portland, Oregon, in 1999. In 1998, while observing a sea of sitting students in a biomechanics class, the germ that was to develop into the focus of his research came into being.

Fryer understood that several people experience low back pain while sitting and/or as a result of sedentary habits, and hypothesized that this was in large part due to compressive effects on the intervertebral discs. His area of interest, and, thus, his practice focus, became disk integrity. To help alleviate pain from sitting, Fryer developed a simple seated unloading exercise that is meant to shift the person’s weight while sitting and minimize the amount of time dependent pressure on the lumbar discs. Fryer put his theories and exercises into clinical use with his patients, beginning with his earliest days in private practice – he still continues to do so – and saw consistent positive results.
He found himself wanting to bring his findings to a wider audience and, so, the drive to actually publish the simple seated exercise, and the ideas surrounding it, began.

THE EARLY STAGES
“I hired an artist to draw the seated unloading strategy, coined ‘chair-care’,” says Fryer, thinking back to his first steps in making his research goal a reality. “As well, I made a $1,000 purchase of the most accurate stadiometre in the world, (accurate to 0.01centimeters), in an attempt to provide the most precise height measurements for the scientific community.”

“Then,” he continues, “I decided to run the study right at the clinic I was working at.”

Following his work with the artist and the purchase of a stadiometer, Fryer sought a collaboration with a statistician from the University of Northern British Columbia.

“After measuring standing height changes before and after the exercise, and finding significant height increases in 89 subjects,” he notes, “I knew I had something!”

MOVING THE IDEA BEYOND THE CLINIC DOORS
Fryer was now faced with the challenge of taking his data outside of his clinic. At a research conference in Vancouver in 2006, Fryer met up with Dr. Mark Erwin, assistant professor, Department of Surgery at the University of Toronto Faculty of Medicine, and Canadian Chiropractic Research Foundation scientist in disc biology.  Fryer presented his findings to Erwin who suggested that the data be corroborated with upright magnetic resonance imaging (MRI) of the spine.  Fryer agreed that this was a logical next step, but felt that the potential financial requirements for this type of venture might prove inhibitive.

“But also,” says Fryer, “I knew I had to do my scientific duty.”

Fryer proceeded by contacting the FONAR corporation, the group that invented MRI and the upright-MRI. In early 2007, while the company’s representatives were in Vancouver to present their upright-MRI to B.C. medical professionals, Fryer was invited – with 24 hours notice – to meet with them. His secretary was asked to reschedule his patients for the following day and, with limited time and sleep, Fryer worked at constructing a presentation that he knew would determine the progress of his journey.

“I began collating my preliminary findings, and all the supporting evidence I could gather, into a Powerpoint presentation,” he recalls. “I even built a new video on the ferry from Nanaimo to Vancouver.”

“I hadn’t realized whom I was to present to,” Fryer continues, “It was Dr. Francis Smith, the first doctor in the world to scan MRI in 1980!”

Dr. Smith’s list of achievements includes his current directorship of the positional MRI Centre in Aberdeen, Scotland, and over 250 scientific publications.

After Fryer had discussed his findings with the FONAR committee, Dr. Smith offered his positional MRI equipment and access to five subjects, in order to gather some initial data on the seating exercises. Smith expressed the opinion that some solid data could be gathered, and collated with Fryer’s own findings, to produce a preliminary paper for possible publication.

Dr. Fryer knew that he had just successfully gained the link that would lend credibility enough to his findings to bring the concept of his seating exercises to the rest of the scientific community.

Results and future directions
Dr. Fryer was able to obtain a small grant from the British Columbia Chiropractic Association that helped allow him to go to Scotland and conduct upright-MRI studies to collate with his own findings. As well, he has designed realistic dynamic disc models – to educate patients, and other clinicians, on mobile disc anatomy and biomechanics – and uses proceeds from the sale of these models to fund his research.

His studies did indeed lead to the peer reviewed publication of a paper. Entitled “Preliminary investigation into a seated unloading movement strategy for the lumbar spine: A pilot study”  it is in press for publication in Journal of Bodywork and Movement Therapy and is also currently available through the Science Direct Database at http://dx.doi.org/10.1016/j.jbmt.2008.06.008 .

Fryer plans on submitting his follow-up work utilizing upright MRI to the journal Spine when the write-up is complete.

As well, Fryer is following through on his recently reviewed paper at The Lancet.  Following some suggestions by the review board for that journal, Fryer is currently working to test his hypothesis with the assistance of the mechanical engineering department at the University of Northern British Columbia.

Dr. Fryer continues to lecture
widely on the topics of osteoarthritis
and related spinal hydraulics, and
nutrition. •