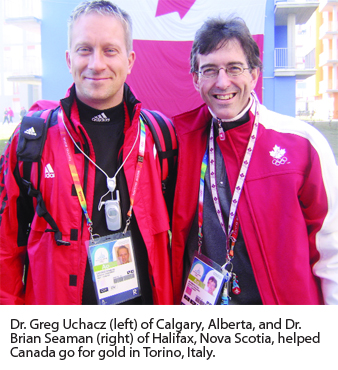 ‘Stephen King called.’
That is how it all started one Saturday afternoon.  Not Stephen King the author, but Stephen King the chief therapist (or “CT”) of the Canadian Health Care Team for the 2006 Winter Olympics in Torino, Italy.  He was phoning those who had been selected to represent our respective health-care professions at the 20th Olympic Winter Games.

It is always an honour and a privilege to represent your profession, even more so to represent your country.  But the Olympic experience actually begins much earlier.  Just as an athlete must train diligently for years, if one of your goals is to work with a national team or be named to Team Canada, you have to start volunteering at local, regional and provincial events.  This eventually leads to national and international experience at what are referred to as the “Major” and “Minor” Games.

The Minor Games include the Commonwealth Games, World Francophone Games, World University Games (Summer and Winter), and the Canada Games (Winter and Summer).

There is lots to think about when planning to be away from your family, friends and practice for four weeks.  There is also the pre-Olympic briefing for the mission staff, which this time took place in September 2005.  Topics covered included: the host country and local customs; an overview of the Olympic Village (in this case there were three of them – Torino, Bardonnechia and Sestriere); mission staff assignments; the needs of individual sports; and travel information.

All of the health-care professionals on the Olympic team have a tremendous amount of experience, not only gained from their “usual” jobs at clinics, but from working with national teams and having volunteered at many previous national and international events.

Preparations must be made for a significant amount of time away from your clinic, as you have to ensure that your patients are covered by an associate or locum, the clinic schedule has been modified, the regular bills will be paid, and that your will and power of attorney are up to date.

The first task on arrival is to set up the medical clinic, which has space for physiotherapy plus private rooms for the physician on duty, massage therapy and chiropractic care.  The tables used in Torino had been donated by the College of Chiropractic Sports Sciences (Canada) to the Canadian Olympic Committee for the Salt Lake City Winter Olympics in 2002. 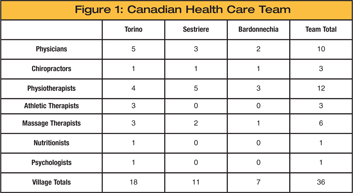 At this Winter Olympics, the team was divided between three athletes’ villages –  Torino, Sestriere and Bardonnechia (Figure 1).

Chiropractic was represented by three chiropractors, one for each of the athletes’ villages.  I was named to the Core Medical Team.  Dr. Greg Uchacz was appointed to the Canadian Health Care Team by a national sport organization (NSO) that represents bobsleigh/skeleton, and he stayed in Sestriere.  Dr. Richard Robinson was also appointed through an NSO, specifically freestyle skiing, and he was stationed in Bardonnechia.

In addition, a clinic manager and two volunteers helped things run smoothly.  Think of how much it takes to set up your own clinic; the Health Care Team had to do it in a few days for a four-week time frame; and then pack it all up again at the end.

Dealing with different athletes is interesting, as each has different stresses, strains and unique challenges, and yet every individual is a great ambassador for Canada.  Being part of a truly multidisciplinary team provides an excellent opportunity to expand your knowledge base and learn new treatment approaches.

Following are a few of the lasting memories: flying over the Alps – they are breathtaking; Italian architecture, culture, chocolate and gelato; Canada’s Olympic House, which was set up in a building that apparently at one time was a palace; B.C. house, a log cabin that promoted Vancouver 2010; Jennifer Heil, winning the first gold medal for Canada (freestyle moguls); meeting up at a hockey game with Duff Gibson, Jeff Pain and Paul Boehm (Canadian men’s skeleton team); watching the women’s hockey team win the gold medal against Sweden; dismay at the men’s hockey team losing to Russia in the semifinal; Cindy Klassen winning five medals;  our athletes earning 24 medals and Canada finishing 3rd overall; the closing ceremonies – you actually see more of them on TV than you do marching in with the Canadian team; being part of a great group of health-care professionals.

It is amazing at the end of the games how quickly the Olympic Village empties out.  The last challenge we faced was packing up the clinic and all of our own gear to go home, and get ready for the next time.
—By Brian Seaman, DC, FCCSS(C), FICC 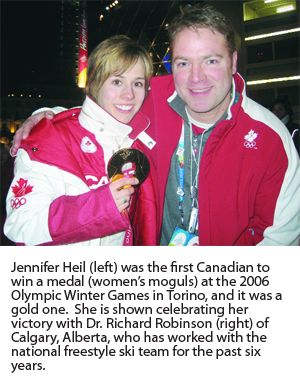 A GOAL FULFILLED
Let me tell you what I got to do.  I had the privilege of being part of Team Canada, and I would encourage any chiropractor who wants to work toward having a similar experience in the future.  Ever since first becoming a chiropractor, my goal was to one day represent chiropractic with Team Canada at the Olympic Games, the ultimate stage for sport.

I had the privilege of being nominated to the team by the freestyle ski team, a group with which I have worked and travelled throughout the world over the past six years.  In Italy, I was able to treat members of that team in addition to athletes from other sports such as speed skating for whom I have provided chiropractic care in Calgary.

Dr. Peter Jenson, a sports psychologist with the health-care team, told us at the Olympic orientation that, of all events you might experience in life, the Olympics would not disappoint, and they did not.  He said they would be bigger than you could imagine, and they were.  The opportunity surpassed most of my expectations, and included some surprises as well.  It is impossible to describe exactly what it was like to be at the Torino Olympics – motorcades, walking in the opening and closing ceremonies, life in the athletes’ village, and too many cappuccinos.

The games are a lot more intense than anything I had ever been involved with before.  Though the physical demands take a toll, truthfully you all probably work as hard in your offices.  But the days run longer, spent partly on the hill while the team trains and competes.  Treatments are performed onsite and at the clinic in the athletes’ village.  Each day is usually capped by meetings.

The games place a tremendous emotional strain on the athletes.  It is a lot harder for athletes to get to the really big show, the Olympics, than to be on the World Cup circuit.  The highs, such as when a medal is won, are very high.  But the lows can be devastating, as the athlete must get back to work and generate hope for another four years.

With three chiropractors in three athletes’ villages, there was easy access to treatment, and chiropractic was afforded excellent exposure.  We need to ensure continued chiropractic representation at Major and Minor Games.

There should be more chiropractors travelling with national teams.  The opportunities are there, at the national team level and certainly at the development level in everyone’s hometown.  I would encourage chiropractors to become involved with all tiers of sport in Canada.  If you get out there, the Olympics may one day become a reality for you too.
—By Richard Robinson, DC

FOCUSING ON THE TASK AT HAND
Having a few minutes to spare before departing for the 2006 Olympic Winter  Games, I took the opportunity to review and update my curriculum vitae.  Peering down at the list of work experience – the national and international events, world championships, and previous Olympic Games – I was drawn into a daze, reflecting upon great memories, numerous successes and failures, emotional highs and lows, and great learning experiences.  Ninety-eight international competitions logged on my CV represented tremendously hard work and a long and arduous road to the ultimate sporting event, the Olympics.

The last several years travelling with and treating the national bobsleigh and skeleton team had forged lifelong friendships, and made me aspire to being the health professional the athletes could depend on.  At the Olympic Games, I aspired to being a calming force for them, a consistent cog in a wheel spinning on adrenalin.

As I continued to help these familiar athletes prepare for the most important competitions of their lives, I began to witness something unexpected.  Each athlete appeared to exhibit an air of calm and focus that I, myself, had been trying to exude for the past several months.  We had come down this road together.  Each from our own perspective, we had prepared to create an environment that sifted out the distractions, provided perspective and balance, and which brought the realization that success is gained from simply focusing on the task at hand.

From competition to competition, I watched the skeleton and bobsleigh athletes succeed.  I witnessed their composure, their maintenance of a sense of humour, and their ability to marshal the butterflies in their stomachs.

When the dust had cleared, five competitions had taken place.  We enjoyed being awarded four medals – one gold, two silver, and one bronze – and experienced on three occasions the loneliest finish position in the Olympic Games – 4th place.

After living in the Olympic “bubble” for three weeks, with the thrill of Olympic podium performances, the real world came crashing back.  With amazing memories and great stories to be told over and over, I can only take it one step at a time until that dreamt-about day in 2010 when the Olympic torch is lit in Vancouver.•
—By Greg Uchacz, DC, FCCSS(C)