Treating the dysfunctional kinetic chain along with the symptomatic tissue. 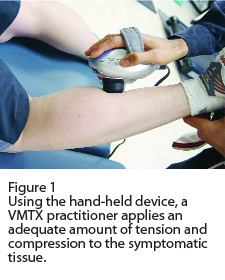 Many chiropractors are expanding their scope beyond the traditional area of spinal injury and dysfunction.  In comparison with a singular focus on spinal manipulative therapy (SMT) for the treatment of patients, a multi-therapeutic approach uses physical modalities, postural and workplace ergonomic recommendations, nutritional supplementation, specific rehabilitative exercises, and various soft tissue techniques.  With research increasingly supporting this type of approach for musculoskeletal injuries, some would say it is imperative that today’s chiropractor become a clinical “jack of all trades” and not only a “master of manipulation.”

The purpose of this article is to provide the chiropractor with an overview of the novel soft tissue technique called Vibromax Therapeutics™ (VMTX), developed by Dr. Mohsen Kazemi, a professor at the Canadian Memorial Chiropractor College, along with three other chiropractors.  An evidence-based approach to soft tissue therapy, VMTX utilizes vibration via compression and tension over the injured soft tissue, and along the specific myofascial kinetic chains.  The aim is to break down adhesions and scar tissue, decrease pain, restore proper muscle function, and enhance performance, with minimal discomfort to patients and providers.  To fully understand the mechanisms by which these results are achieved, a brief discussion of vibration as a naturally occurring stimulus must be further explored.

VIBRATION WITH EACH AND EVERY STEP
During any physical activity or movement, the human body interacts with the external environment and experiences external forces.  These forces cause vibrations and oscillations within the soft tissues of the body.  For example, during gait the legs alternate between the stance and swing phases.  It is during heel strike of the stance phase that the gastrocnemius undergoes vibrations from the impact and must actively recruit muscle fibres to dampen the amplitude of these vibrations.  The transmission of vibrations through the body is regulated by bone, cartilage, soft tissues, synovial fluids, joint kinematics, and muscular activity (Cardinale & Wakeling, 2005).  Joint kinematics and muscle activity, which can efficiently and effectively dampen vibration over a short time frame, are used by the body to change its vibrational response to external forces.  Dr. Benno Nigg, at the University of Calgary, has implied that the body has a strategy of “tuning” its muscle activity to reduce its soft tissue vibrations in an attempt to reduce harmful effects (Nigg, 2001).  According to this theory, the magnitude of the muscular response is related to the interaction between the amplitude and frequency of the vibration input and the intrinsic neuromuscular properties.  It has also been suggested, and somewhat significantly shown in the research literature, that vibrations can be used as a training aid.

THE BENEFITS OF VIBRATION
Some of the benefits of vibration training suggested in the literature are an increase in average force and power (Bosco et al., 1999), muscle blood flow (Kerschan-Schindl et al., 2001), proprioception (Fontana et al., 2005) and hormone secretions (Goto & Takamatsu, 2005). Other benefits that have not been well studied in the literature but have been reported are soft tissue and joint mobilizations, breakdown of scar tissue, and decrease in pain and muscle inhibition.  The developers of VMTX have taken the benefits of vibration training and incorporated them in a therapeutic manner utilizing various myofascial kinetic chains.

MYOFASCIAL KINETIC CHAINS: ACTIVE OR PASSIVE COMPONENTS?
Fascia can be defined as “dense irregular connective tissue sheets in the human body” (Schleip et al., 2005).  Traditionally, it was assumed that fascia acted as a passive structure that contributed to biomechanical behaviour of certain intertwined anatomical structures.  More recent literature has shown, however, that fibroblasts, which are cells that give rise to fascial tissue, have the ability to express the gene for smooth muscle action (Spector, 2002).  If triggered, these cells have the potential to generate contractile force, and increase fascial stiffness (Bisson et al., 2004; Spector, 2002).  In addition to opposing mechanical advantage, these cells can influence the mechanoreceptors and affect proprioceptive function.  It is for this very reason that VMTX strives to treat the symptomatic tissue along with the surrounding myofascial kinetic chains. 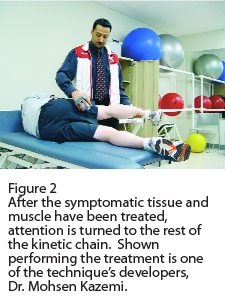 VMTX practitioners treat the specific injured tissue along with the myofascial kinetic chain in which the symptomatic tissue may lie.  For example, if a runner comes in with a strain of the medial head of gastrocnemius, the practitioner will first apply the custom hand-held apparatus to the injured fibres of the muscle for one minute (Figure 1).  The vibration is then applied along the entire length of the gastrocnemius for an additional minute while the patient is actively lengthening and shortening the muscle.  Then, the vibration is applied to the entire myofascial kinetic chain of which the gastrocnemius is a part (Figure 2).  In this example, the corresponding kinetic chain is the superficial lower limb chain, which consists of the dorsal sacral ligament, sacrotuberous ligament, hamstrings, gastrocnemius, plantaris, soleus, Achilles tendon, and the plantar fascia and aponeurosis.  The patient is then instructed on how to stretch and strengthen that specific muscle and myofascial kinetic chain in order to prevent reoccurrence.

The developers of VMTX outline in seminar materials the various anatomical structures with respect to their intimate anatomy, functional and clinical relevance, localization and palpation, and detailed treatment procedures.  An easy-to-learn technique, it adds dimension to the treatment of soft tissue injuries, and the enhancement of patients’ performance.•