4 reasons why you should integrate shockwave therapy into your practice 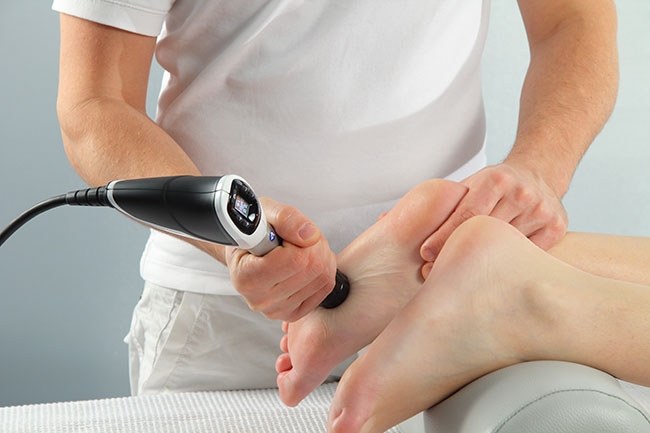 Over the last 20 years, shockwave therapy (SWT) has evolved at an incredible pace.  Originally developed to treat kidney stones, SWT is a non-invasive alternative to surgery, and has been used to treat people of all ages, and multiple conditions.

Shockwave therapy has set a high standard of care. Numerous double-blind randomized studies have supported its use and it has been scientifically shown to create neovascularization and neurogenesis in the effected tissue. These studies have been reviewed and supported by the FDA. Shockwave therapy  has also been shown to be very cost effective: covered by most insurance companies as part of chiropractic care. By incorporating shockwave therapy into their practices, chiropractors have been able to practise longer and have decreased wear and tear on their bodies.

Science of the technology
Shockwave devices, like computers, have transformed from large (200 kg) machines to portable, lightweight devices with the computer and controls being housed in the hand-piece. Shockwave devices were originally designed to penetrate a small target in the tissue with high energy, dissipated over a short period of time. These devices were traditionally spark gap generated and electromagnetic. The focused devices are now more commonly used in orthopedics for the treatment of shoulder calcification, stress fractures, and bony non-unions.

The most common device used now is a radial shockwave device – a lower energy pressure wave dissipated over a longer period of time. It is primarily used to treat musculoskeletal disorders and tendinopathies. This radial device works by propelling a small metal projectile through a chamber using high air pressure. The projectile then collides with the head of the hand-piece creating the sound wave. Gel is used to propagate the wave through the skin to the desired tissue. There, the sound waves activate the body’s natural healing processes and stimulate tissue repair.

Chiropractors often perform treatment on many areas of the body using different modalities, and shockwave treatment now accounts for many of those indications. One company also offers a hand piece that combines vibration and shockwave to treat myofascial disorders. Some devices have the ability to do cupping, needleless acupuncture, and spine treatments Shockwave therapy allows chiropractors to broaden their scope of practice, enhancing treatment of the patient.

Shockwave therapy is non-invasive and does not use needles or probes. It has replaced numerous other methods of treatment. Local anesthetic is not required as the treatment is not painful and usually only takes about four minutes.

The contraindications for shockwave therapy include: existing cancer, those with pacemakers, and pregnancy. Patients are also asked to refrain from taking anti-inflammatory medications as it will block the pathway shockwave uses to promote tissue healing. However, patients who require blood thinners do not have to stop their medication because it improves the effectiveness of the treatment.

Robust research
In a recent Current Concepts Review, Dr. Moya demonstrated the pathway where shockwave therapy works. There are phases to the mechanism of healing: First is the physical phase, where sound waves increase permeability of the effected tissue, and cell signaling pathways are activated. Second is the physicochemical phase, where shockwave stimulates the release of biomolecule adenosine triphosphate (ATP) to activate cell signal pathways. In the third (chemical) phase, shockwaves change the functions of ion channels in the cell membrane and the calcium mobilization in cells. Following this phase, the biological phase modulates angiogenesis [von Willebrand factor [vWF], vascular endothelial growth factor [VEGF], endothelial nitric oxide synthase [eNOS], and proliferating cell nuclear antigen [PCNA]), anti-inflammatory effects. The combination of these four phases results in the great healing potential of shockwaves.

The effectiveness of shockwaves with respect to numerous conditions has been published in a number of studies. For example, shockwave therapy can be effective in improving function and decreasing pain by 91 per cent for calcific rotator cuff tendinopaties. Dr. Gerdesmeyer reported that those who underwent shockwave therapy saw an 86 per cent calcium reabsorption in one year.

Impressively, in a study done by Dr. Cacchio (American Journal of Sports Medicine, 2010), he showed that in professional soccer players in the English Premier League who had chronic proximal hamstring tendinopathy, 17 of the 20 patients (85 per cent) in the shockwave therapy group saw at least a 50 per cent reduction in pain after three months and were able to return to play 8.5 times faster than the placebo.

Other studies have shown the effectiveness of shockwave therapy in the treatment of tennis elbow, Morton’s neuroma, frozen shoulder, and shin splints.

Most studies used radial shockwave devices that treat the patient three times over a two-week span. With success rates ranging from 76 to 91 per cent improvement, it is still very important to understand that the regenerative healing process that occurs from shockwave therapy takes three months.

The treatment of trigger points only requires a one-time treatment and can be done as often as the practitioner feels necessary. (As opposed to treating tendinopathies, which require three treatments.)

Economics
In Canada there are two companies that are both Health Canada and FDA approved. These machines are very affordable and cost as low as $220 a month (lease to own). Shockwave therapy gives a high return on investment, resulting in greater profits for your clinic. Moreover, treating patients successfully at a higher rate than your colleagues who do not have SWT in their practice differentiates you from the competition.

Machines are portable, lightweight and can be easily transported if necessary. This is especially convenient for chiropractors that make house calls or have multiple clinics. Simply put, by making your patients better, your business will flourish and your patients will significantly improve in their function and quality of life.

DR. ROBERT GORDON is  an orthopaedic surgeon specializing in knee surgery. He is on staff at the University Health Network at the University of Toronto and at William Osler Health Centre. He is the past president of the International Society for Medical Shockwave Treatment. Gordon helped introduce shockwave therapy to Canada and has lectured at numerous institutions and conferences. He has published papers on shockwave therapy and has been treating patients for almost 20 years with shockwave.
Irene Kiroplis completed her Bachelor of Science in Kinesiology at The Pennsylvania State University in 2018. Irene also played for the Rugby team and NCAA Division 1 Nittany Lions women’s ice hockey team. Currently Irene is a research assistant with Dr. Robert Gordon and Dr. Jas Chahal at the University Health network in Toronto.