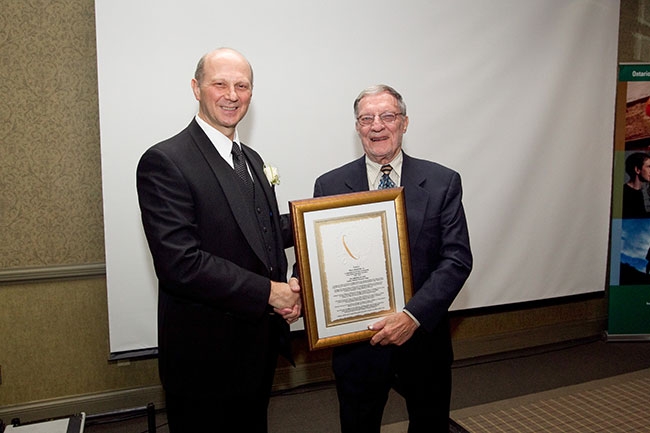 Dr. Holtom was already sitting outside with a friend when I went to pick him up at his retirement residence. It was a nicely appointed place with lots of people, a change from the quiet independent life in his home clinic, in Stittsville, Ontario.

He had a cane, but didn’t rely on it. He had no problems recognizing my car, and got up before I could go shake his hand, saying right away, “I am hungry – lets go!”

For the next two hours, I was awarded a glimpse into what I consider among the most prodigious chiropractic careers ever recorded. “Red wine with dinner, two or three glasses and no hard liquor” he stated. I can’t argue with the results of that prescription.

It’s humbling, talking to someone who has practised longer than I have been alive. Is a chiropractic practice one of the secrets to a long life?

I am a World War II history buff, so that’s where we started the conversation. Dr. Holtom wanted to be a pilot, but was talked into applying before he graduated high school and found out he was not eligible. A year before his attempted application, at age 17, his mother pulled him out of school, which he was grateful for later on as his school buddies ended up in the Canadian battalion in Hong Kong just before the Japanese invasion. Most never returned as the Japanese invaded and took the island a short time later.

He soon turned 18 years of age and entered the war as ground crew – particularly in instrumentation for fighter aircraft, P40 Curtis Hawks. Shortly after his training, his group rushed to the Aleutian Islands near Alaska to deter the Japanese from further advances. They were in the next island to the Japanese soldiers and pilots, and the conditions were not great. For two years, he endured living in a tent in a large dugout hole with a pot-bellied stove to keep warm. The stove never lasted the night, at times it was quite cold. To make it worse, for the first year there was no alcohol or leave. As a young man, it was no picnic. Two years was plenty of time, then he was sent back to Ottawa to work. He qualified as a second lieutenant, but it was too late to fly fighters, as the war was winding down. He decided to finish up his time in his trade, which upon discharge allowed he and other veterans like my father, tuition and expenses to attend a professional school.

Introduction to Chiropractic
His mother was unwell before seeing a chiropractor in Ottawa, Dr. George Graham. He was a soft spoken man, very well respected and very influential in the chiropractic community. Dr. Graham had helped his mom relieve quite a few problems including chronic debilitating migraine headaches. One day she developed a severe ulcer on her leg, which the medical doctors at the time were unable to support. As the condition worsened, it was recommended that she consider amputation. She and her son (Dr. Holtom) declined, and based on her previous success, he asked his mother to consider speaking with Dr. Graham. His mother insisted that her issues did not warrant a chiropractor. Dr. Holtom requested that she give him the opportunity to discuss possible treatment with Dr. Graham. “What have you got to lose – just the leg?”

On the phone, Dr. Graham agreed to examine and see if perhaps he could assist. Once her treatment began (including adjustments, ultraviolet light and some topicals), the ulcer began to heal. Dr. Holtom decided that after witnessing chiropractic care spare someone he loved from amputation, it was probably not a bad profession to get into.

His own personal experience regarding chiropractic came about during a hockey game with his pals. He was badly injured on the ice and was unable to move. They carried the second year CMCC student to his home and he spent the next few days in bed, having to crawl to the bathroom. Eventually, Dr. Dean Homewood decided to check in on his student. For the next two weeks, Dr. Holtom received daily adjustments. He was back on the ice in a month.

Dr. Holtom’s first patient was a long time coming. He had been open about two weeks when a man came in complaining of ingrown toe nails. He had a physician but the physician was not nearby and Dr. Holtom was his next choice. Dr. Holtom organized some appropriate treatment but it wasn’t the beginning he had dreamed of.

In spite of a slow start (treatment cost at that time was two dollars and fifty cents), Dr. Holtom went on to develop one of the busiest clinics ever seen in Ottawa. During the seventies, he was seeing over 500 patients a week, something he attributed to attending Parker Seminars and the Grand Tour Organization (GTO). GTO was the name that was applied to a doctor that attended seven seminars in a row. He said that, it was during this time he went to all the classes and began applying all the information to his practice. It made a huge difference and his clinic became extremely busy.

Dr. Holtom was one of the people involved in politics when OHIP was obtained by chiropractic. Ministers of Health were often medically oriented but to his recollection, we had one or two key supporters in provincial cabinet who were instrumental in helping chiropractors achieve the goal of partial compensation, which also provided the profession with third party credibility. Looking back, this was a key major step forward for the profession and helped develop many chiropractic practices almost overnight.

Like every generation before and after, he was asked to get involved in the OCA board. His involvement with the OCA lasted for 12 years. He was always willing to serve, even when asked to serve a third year as President.

Dr. Holtom’s Takeaways from 68 years of Practice
Practicing Chiropractic – Dr. Holtom didn’t run a relief care or acute care practice. He always talked about the five antecedents of health being diet, exercise, rest, positive mental attitude, and a sound functioning nervous system. He recommended a B-complex supplement for most patients to help support the dietary changes. He would see patients three times a week for a month, twice a week for a month and then once a week for a month. He recommended no less than an adjustment every two weeks for maintenance. Dr. Holtom’s opinion, based on his experience was that it takes time to change years of spinal degeneration, and that it had to be maintained. He himself gets an adjustment every two weeks to this day. Patients attended a workshop that he held every two weeks to help them understand these concepts. Dr. Holtom is a believer in the full spine X-ray. He does not understand why chiropractors thought they could really appreciate the nuances of the spinal issues such as anatomical short legs, pseudo-arthrosis and so on, without a means to visualize them.

Money – Dr. Holtom was very successful in practice and had some advice based on his own experiences with finances. He said that real estate was his most successful investment. His homes all did very well over time. He recommended not to get involved in less established financial investment opportunities because, in his experience, they did not usually work out.

The profession today – Dr. Holtom feels that perhaps we had lost our way in the profession. He disagreed with veering too far away from the original purpose of chiropractic: the correction of the spine through adjustments. In his later years, some of his patients had come to him because they were not being adjusted by other chiropractors and therefore they were not getting well. Our uniqueness in health care is the spinal adjustment. There is currently too much emphasis on the other things.

Dr. Holtom, we owe you a debt of gratitude for all you have done for this profession. You are a great example of what is possible when you follow the chiropractic approach to life.

Dirk Keenan is a second-generation chiropractor practicing in Ottawa’s oldest clinic for the past 34 years. Dr. Keenan pursues an active interest in multi-disciplinary clinics, Interprofessional education, and chiropractic practices abroad. He is currently in the midst of establishing an international locum service.   Interested parties in international locums, multi-disciplinary practices, or interprofessional education can contact him at dirk@thespinedoctor.com.