Features Education Profession
If It’s Friday, This Must Be Beijing

Challenged by only one career? Meet Dr. Derick Watson. 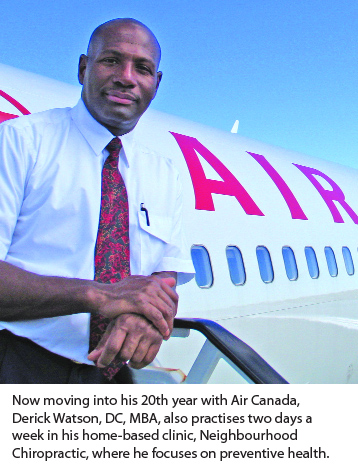 If it’s Friday, you might find him touring Beijing’s Forbidden City. But on Monday and Wednesday he’ll be back in Ontario advising patients on exercise, diet and lifestyle at his home-based Richmond Hill clinic.

An avid gym enthusiast who practises what he preaches as a practitioner, Dr. Derick Watson is a multilingual, multicultural and multi-professional phenomenon. Turning 50 in January, he deftly juggles two careers, one on the ground and one in the air. He is an Air Canada purser, having signed on with the carrier in 1988, as well as a 2003 graduate of the Canadian Memorial Chiropractic College.

“It’s the hardest thing I’ve ever done,” says Dr. Watson of the four-year course at CMCC. Only a few of his fellow students knew that while they were hitting the books at the start of the weekend, he would be flying off to Tel Aviv, Frankfurt, Osaka, or some other corner of the globe. He’d attempt to get some shut-eye before showing up for classes on Monday morning or after an occasional mid-week all-night flight to Calgary or Vancouver.

A consistent tone sounding throughout his life, says Watson, is alternative health. Committed to improving the well-being of his patients, many of whom are airline employees, Watson recognizes the power of personal example. “I lead the life I profess,” he says. His dream is to someday create a place where people can come to learn what wellness is really about, and in order to build a complete alternative health service he is seriously considering applying to medical school.

CUBAN SCHOLARSHIP
Born in Kingston, Jamaica, Watson received a scholarship from the Cuban government in 1978. He joined other West Indians, Latin Americans and Africans in Havana at the Instituto Superior de Cultura Fisica from which he earned an undergraduate degree in physical education. Returning to Jamaica, he took a position with Sandals Resorts as entertainment and activities co-ordinator, and later he was entertainment manager for SuperClub’s Hedonism II and Americana’s Eden II. Then it was off to Santa Barbara, California, for a diploma in holistic studies, followed by marriage and relocation to Montreal. Working as a massotherapist to put himself through McGill University’s tourism management diploma program, Watson was still far from finished with academia. In his eighth year with Air Canada, he accepted an MBA degree in operations management from the University of Montreal’s École des Hautes Études Commerciales, where he stayed on for a couple of years as an associate professor.

A quarter of a century has passed since Watson left Havana. Two years ago, he spearheaded a drive to form the Jamaica-Cuba Alumni Association, for which he currently serves as president. The objectives are to bring together former students of Cuban institutions, to enhance the educational affiliation between the two countries, and to give something back. In August each year, a reunion held in Jamaica is attended by teachers, medical workers and other professionals to whom Cuba provided a totally free education that included room and board, Spanish language classes, and a stipend.
“They are resilient and determined people,” Watson says fondly of the Cubans, “who live under extremely difficult conditions and still find it possible to share what they have with everyone else.”

PRIOR TO DEPARTURE
Unless you have an office appointment, you might have to follow these directions to meet up with Dr. Watson: Drive into Terminal 1 Departures, veer off left, take the first right and park, then get on a moving sidewalk running into the terminal, go downstairs on the escalator to International Arrivals, walk to the south end, look up and you will see a coffee shop. Waiting there, in full uniform, he has a few moments to spare after arriving early to check flight information. As the service director on a new Boeing 777, he will be responsible for supervising 12 crew members, who must take care of 300 passengers for 12 hours en route to Tokyo’s Narita Airport. Happily, he still counts travelling as one of his favourite pastimes.

Taking on tasks one by one is central to Watson’s outlook. He makes every effort to sleep well, eat well and work out, though admittedly there is not much time for play.
“I try to laugh every day,” he smiles, “and more than once a day.”•