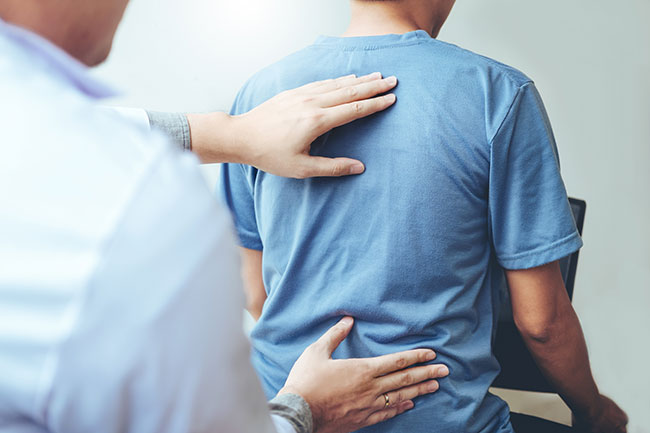 When you first break a bone, the body sends out an inflammatory response, and cells begin to form a hematoma around the injured area. Within a week or two, that blood clot is replaced with a soft material called callus that forms a bridge of sorts that holds the fragments together. Over months, the callus hardens into bone, and the healing process is complete.

But sometimes, that bridge between the bones fails to form, creating a nonunion. In patients with long-bone fractures (of the tibia, fibia, or femur, for example), nonunions can be particularly debilitating, severely affecting their quality of life and ability to work. For surgeons, nonunions can be difficult to diagnose as they require subjective assessments of X-rays taken over a period of six to nine months. The difficulty lies in that the bone could be healing, just very slowly, in which case additional intervention may not be necessary. But if it’s not healing, the patient has endured months of pain and limited activity, only to face additional surgery.

In a perfect world, surgeons would have a tool that could identify nonunions earlier.

“The end goal is to save patients time, money, and frustration,” says Brendan Inglis, a Lehigh University graduate student in the Department of Mechanical Engineering and Mechanics. “Because if the surgeon comes back to you and says you have a clinically diagnosed nonunion, and you need further interventions, that’s going to further delay your ability to get back to your life.”

Inglis is the lead author of a paper recently published in Scientific Reports that shows how the dual nature of the healing zone, as both a soft and hard material, determines the mechanical rigidity of the whole bone. The work builds on research in the lab of Hannah Dailey, an assistant professor of mechanical engineering and mechanics in Lehigh’s P.C. Rossin College of Engineering and Applied Science. Previously, the team has shown the viability of using a non-invasive, imaging-based virtual biomechanical test to assess the progress of fracture healing. Additionally, the team has developed and validated a material properties assignment method for intact ovine bones using virtual biomechanical testing.

The problem, says Inglis, was that the virtual tests overpredicted the mechanical properties of the bone early in the healing process because parts of the callus are still too soft to be modeled as bone.

“When we applied that model to fractured ovine tibia, essentially a sheep’s lower leg, the mechanical properties didn’t match,” he says. “Our hypothesis was that all the soft tissue and cartilage involved in the healing of a fractured limb was being overpredicted, meaning the callus was being assigned properties that were too stiff.”

“Callus is a highly heterogeneous tissue, meaning it contains more than one density and stiffness value,” says Inglis. “So if you’re going to model an operated limb, you can’t treat everything as dense bone. You need to come up with some way to treat callus differently. But the mechanical properties of callus still aren’t well understood, and there wasn’t anything in the literature that set the cutoff point between where you start treating the healing zone as soft tissue, and where you start treating it as bone.”

To determine that cutoff, Inglis and his team worked with collaborators at the Musculoskeletal Research Unit (MSRU) at the University of Zurich. The Swiss researchers used a torsion tester to measure torsional rigidity in excised sheep tibia, and the Lehigh team used the corresponding CT scans and data to replicate those biomechanical tests virtually.

Inglis explains that the brightness of the pixels within the CT bone scans correlate to density. The brighter the pixel, the stiffer that area of bone.

“You can imagine that from a black pixel to the brightest white pixel, there’s a whole spectrum of values. So essentially what we did was find the cutoff below which the pixels are getting darker and should be treated as very soft. We postulated that prior to this study, those darker pixels were being calibrated too high, and assumed to be too stiff in the model.”

Utilizing a piecewise material model, they optimized a cutoff point that separates soft tissue from bone.

“When you get that density cutoff right, the virtual models can accurately replicate the rigidity you get from a bench biomechanical test of that same bone,” he says. “Once you have a model that’s validated to what was done on a bench test, you can start to predict different things about the behavior of healing bones. And the more we understand about why the healing process fails, the better our chances of creating a tool that could one day inform surgeons. So this model gives us a foothold into one day translating this work into the clinic.”

To illustrate their findings, Inglis created an app that allows others in the field to interact with the data.

“As researchers, we often read a great paper, and come across a value we’ll be curious about, and the citation just points us to another paper, which points you to another paper, and so it becomes this whole rabbit hole effect,” he says. “This app is a nice way to visualize what we did, and build it into your own research. I think in an ideal world, there will be more sharing of information like this because in the end, that’s the purpose of doing research.”

This research is based in part upon work supported by the National Science Foundation (NSF) under a CAREER Award to Hannah Dailey (Grant No. CMMI-1943287.)

Related
Why older people have trouble healing broken bones
Bone and muscle health can ‘make or break’ care as we age
Muscle paralysis may hasten bone loss: study
Exercising while restricting calories could be bad for bone health