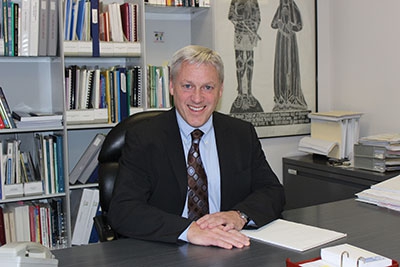 If there is one thing Dr. Greg Stewart is most excited about in his new role as president of the World Federation of Chiropractic (WFC), it is the opportunity to help advance the chiropractic profession as an equal player in the global health-care arena, helping solve some of the world’s most pressing health issues.

There has never been a better time to push the envelope and establish chiropractors as spinal health care experts, and Stewart intends to work towards this objective.

“The opportunities have never been better. It’s a matter of whether we have the courage to walk through the doors that are open,” says the Winnipeg-based veteran chiropractor.

Those open doors come in the form of a growing urgency to address musculoskeletal health issues that continue to affect most of the world’s population. In fact, a 2012 Global Burden of Disease report essentially cites back pain as the number one cause of disability in the world. Spinal disorders are now a greater contributor to the burden of disease than HIV/AIDS,  malaria, stroke, lung and breast cancer, and diabetes.

The World Health Organization has acknowledged the need for leadership in this global health crisis. Stewart and his colleagues at WFC believe chiropractic is well positioned to lead in this area.

“Right now … there is no leadership, there is no solution that is brought forth by any other body,” Stewart says, adding this will be a main focus of his presidency at WFC.

Being able to help solve this global health-care crisis is more than just an opportunity for professional growth, however. Stewart says it’s a “moral responsibility.”

“We have the ability to change the way the world is dealing with their health care. It’s cost effective, it’s drugless, it has unlimited possibilities to help improve the health of the world and decrease this burden of disability worldwide.”

But the work the WFC is doing to engage the international health community needs the support of chiropractors, not just in Canada but also around the world, he adds.

Established in 1988, WFC represents national associations of chiropractors in 88 countries in the international community. It has official relations with the WHO and is a member of the Council of International Organizations of Medical Sciences, among other international affiliations.

Community service
Advocating for the chiropractic profession has always been part of Stewart’s career. For the past 28 years he has managed a good balance between his full-time practice and serving his professional community.

Since 1990, Stewart has served in numerous chiropractic committees in the provincial and national associations. He became the president of the Manitoba Chiropractors’ Association in 1994, serving a three-year term. His desire to make a difference in his profession took his journey to the national level, serving as president of the Canadian Chiropractic Association in 2002. Stewart is also not new to the international scene, representing Canada and North America on the council of the World Federation of Chiropractic (WFC) since 2006.

He recalls his first involvement with the international body was during consultations regarding the “identity” of the chiropractic profession. He was there representing the CCA.

After an extensive, year-long process, a broadly accepted resolution was instituted which essentially identified chiropractors as spinal care experts.

The process to develop a globally accepted identity for chiropractic gave Stewart a glimpse of the amount of collaboration and open dialogue – between opposing views and differing principles – required to achieve global consensus and unify the profession.

“It gave me a first-hand look at chiropractic around the world,” he says.

Working with the WFC has also opened his eyes to various issues and challenges chiropractors around the world are facing, many of them things that practitioners in this part of the world have almost taken for granted – like practising chiropractic.

“Chiropractors in Taiwan have been basically told in order for them to practice, they are going to have to call themselves physiotherapists. And they are having to fight a battle that we can’t even envision here (in Canada),” Stewart points out.

In South Korea, chiropractic is viewed as an illegal practice of medicine, prompting many chiropractors there to leave the country and practise somewhere else.

“We have these contradictions within countries, and the issues we are dealing with in North America seem trivial compared to the battles that are going on (in other parts) of the world.”

Then there are those on the other side of the spectrum, where chiropractic has continued to flourish and become more integrated in health care.

He says this early exposure to one another – between the medical and chiropractic fields – is enabling the development of a new generation of health-care practitioners that is much more inclined to collaboration.

Stewart believes increasing chiropractic’s exposure to other disciplines at the education level paves the way for greater recognition and credibility within the wider health-care realm.

“We have to leave our little comfortable areas and actually go into areas that are challenging, and sometimes are confrontational, in order to get ahead,” he says

A good place to start is in developing and implementing consistent approach to assessing and addressing health issues, such as back pain. Chiropractors need to achieve some “commonalities” in their assessment and diagnosis, and be able to articulate reasonable – yet not necessarily identical – treatment plans, he says.

Having a consistent approach can open new doors for increased multidisciplinary health-care collaboration – so does using language that is comprehensible across health disciplines.

“(Chiropractors) are encumbered by a unique Lexicon,” he points out. “Unique language is wonderful – it reflects our history, it’s respectful of our forefathers, it’s meaningful to us – but perhaps language and our Lexicon may be a hindrance to collaboration. And if it is, then we have to be strategic and perhaps use language in different situations appropriately.”

Whether the uniquely chiropractic vocabulary is or isn’t a hindrance to collaboration is something that will be discussed at the WFC Congress, to be held in Athens in May 2015.

Stewart expects those discussions would be another opportunity for chiropractors to come together and find more common ground.

It is no secret the chiropractic profession not only has had to deflect critics and questions about credibility from outside entities; for the longest time, it has also been beleaguered with internal conflicts, mostly brought on by differences in principles and views about the practice of chiropractic.

Stewart acknowledges there are still ongoing issues that may have to be ironed out within the profession, but cautions against letting these inner disagreements get in the way of progress for the profession.

There are, however, principles that will likely remain unpopular among many practitioners, such as making drug prescription part of the chiropractic scope of practice.

Expressing his views on this matter, Stewart wonders, “Is this about chiropractors trying to elevate their own self worth or is it something that is really needed by the profession overall? I think it’s based upon individuals trying to have an increase in their market, rather than actually addressing any sort of health need of the community.”

As far as WFC is concerned, chiropractic is to remain drugless.

“The world is not short of drug intervention,” Stewart says. He points out, however, that maintaining a drugless approach does not mean being anti-drug. “I am not anti-drug. My daughter is in medicine right now. But I don’t see the need for prescription rights in my practice on a day-to-day basis, considering I have excellent relationships with medical doctors in my community that when I see there is a need for medication, I direct them accordingly.”

Despite the challenges – external and internal – Stewart is confident the profession can effect big changes in health care, nationally and globally.

“I cannot overstate the opportunities that are there internationally. It’s whether we can grab the brass ring on this. It’s my personal goal to really move away from chiropractic just trying to survive, into a world where we flourish.”

Mari-Len De Guzman is the editor of Canadian Chiropractor magazine. Email her at mdeguzman@annexweb.com.