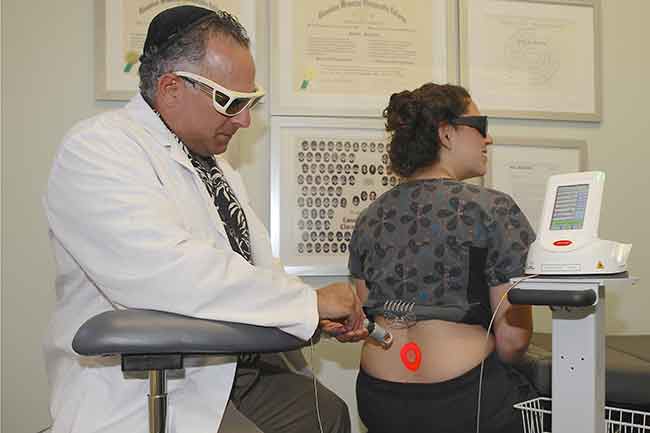 Talk to Dr. Dean Greenwood about low-level laser therapy (LLLT) for acute and chronic conditions, and he’ll say it’s effective. If you’d asked him the same question a decade ago, he’d have answered differently.

“I was skeptical at first,” says the Vancouver Spine Centre clinician. “I didn’t see how lasers could do anything. But I’ve proven that not to be the case. It’s very useful in my opinion.”

When it comes to LLLT, skepticism is a common reaction. Plenty of articles on the web question this relatively new modality, leaving patients and doctors confused. Is it quackery or quality? But DCs who, like Greenwood, researched it and went on to provide it say laser therapy is effective – and they have proof.

How it works
Dr. David Kunashko, director of education and training at laser equipment provider Meditech International Inc. in Toronto, explains the theory behind LLLT: laser light stimulates injured cells, causing them to metabolize more quickly than they would normally. That metabolism accelerates the healing process.

Patients may wonder about that theory, especially since some of the information they might find about this topic on the web discounts it. Wikipedia says LLLT is “in most cases no better than placebo” for arthritis, neck pain and other joint problems. Further, “the evidence for LLLT being useful in the treatment of low back pain…is dubious” and “it is unclear how LLLT works.”

But plenty of literature verifies LLLT. A 2009 report in the Lancet indicated that it reduces neck pain. In 2010, the American Physical Therapy Association recommended clinicians use LLLT to relieve pain and stiffness for patients who have Achilles tendinopathy. A 2014 report in the Cochrane Library focused on people who have frozen shoulder, and indicated that patients who received LLLT experienced less pain than people who received placebos.

The evidence is somewhat new, so it isn’t common chiropractic knowledge yet. “It takes time for it to filter down into the educational institutions and for them to teach that,” Kunashko says.

Nonetheless, the information exists – and it convinced Greenwood, the Vancouver chiropractor, to start providing LLLT.

“In my opinion, anyone who states there’s very little evidence to support the use of low-level laser therapy for certain and particular conditions is just misinformed,” he says.

He spent two years researching LLLT before he decided to provide it about eight years ago. He uses it to treat a number of conditions, including carpal tunnel, neuropathy syndromes, acute tendon and ligament injuries, osteoarthritis and thoracic bursitis.

Ironically for a spine specialist, “I haven’t found it quite as useful for the treatment of acute or chronic low back pain, although I do use it adjunctively when treating patients who have chronic conditions,” he says.

Although research indicates LLLT produces no side effects, patients may tell you otherwise. “I have patients who have described feeling a pulse or a tingling,” Greenwood says. “That might have to do with their hypersensitivity to the injured area.”

Dr. Patricia Andrews runs WOW Chiropractic in Edmonton. She started researching laser therapy about six years ago. At the time, she was looking for an alternative to ultrasound and muscle stimulation treatment after, frankly, her equipment was stolen.

“I’d heard that laser treatment was quite helpful, so I thought I’d look into it,” she says. After some research, she decided that the future for her clinic was with laser instead of muscle
stimulation equipment.

Andrews uses it most often for sprains, strains and chronic rotator cuff problems, and sometimes for acute lower back or neck pain. “It seems effective for knee arthritis and other knee issues,” she says.

Dr. Amy Brown, a member of the clinical team at Coronation Chiropractic and Massage in Cambridge, Ont., has provided LLLT for about four years now. When she first started, she was looking to manage particular back pain patients – people who are “what I call the sticky cases, the ones who don’t respond as well to traditional care.”

Since she started providing laser therapy, she has used it in various cases, “not just back related, but also extremities and older patients with arthritis,” she says. Some elderly patients who have bone-density issues find traditional treatment hard to take. “A gentler option is a fantastic tool to have at your disposal,” Brown says.

“It doesn’t work for everyone,” she notes. Of course, that’s true for all modalities, she says. “It’s a bit of a trial-and-error situation sometimes. But the nice thing is, you’re often going to know very quickly if it’s helping,” usually after the first two to three treatments. The average course is five to 10 treatments, she says.

Equipment options
LLLT involves use of a near-infrared laser operating at a wavelength of 600 to 1,000 nanometers, at various power levels. Devices usually have either Class 3B lasers, which operate at less than 500 milliwatts, or Class 4 lasers, which operate at more than 500 milliwatts. These lasers are designed to produce no heat, which is why LLLT is sometimes called cold laser therapy.

Choosing between a device that has a Class 3B laser and another with a Class 4 laser isn’t straightforward. Some Class 4 equipment vendors suggest that their products are more powerful, penetrate more deeply and work more quickly. But some Class 3B laser makers say Class 4 devices don’t penetrate any deeper or any faster – and worse, Class 4 lasers can burn the patient, they claim.

Chiropractor Dr. Ron Nusbaum, director of Back Clinics of Canada located in Vaughan, Ont., notes those opposing points of view. For his money, Class 4 is superior – and the dangers associated with it, theoretical.

“I have delivered LLLT to about 20,000 patients. Nobody’s been burnt.”

Nusbaum had his first experience with laser therapy as a patient after a bad slip-and-fall accident. He tripped over a raised manhole cover.

“A bystander said I actually did a 360, but that’s impossible.” He landed prone and tore his shoulder so severely that he could barely move his arm. He went for laser therapy. His range of motion increased dramatically.

“That got my attention,” Nusbaum says. “There’s no placebo that can do that.”

He spent a lot of time researching the differences between Class 3B and Class 4 systems to find the best one for his clinic. He eventually found that Class 4 systems apply therapeutic doses over a larger surface area in a shorter period of time. “This is particularly more convenient for patients,” he says.

That’s the conclusion Nusbaum came to after careful research. But many still wonder if Class 4 equipment is safe or all that much more effective.

“I am not convinced that there is a ‘deeper’ effect,” Greenwood says, adding that manufacturers have been promoting their Class 4 products heavily lately – and he worries that the marketing hype overstates the equipment’s capabilities. “I think Class 3 is a safe and effective option for chiropractors when used correctly.”

As for cost, equipment prices vary greatly. You can buy a basic unit for $1,000, or you can spend more than $20,000 on a device that comes with a stand, multiple wavelength settings and different light sources including laser and LED. Class 4 gear tends to be pricier than Class 3B products. The more expensive equipment puts a bigger dent in the pocketbook, of course, but it may let you work more quickly, so you spend less time providing treatment on each patient.

Greenwood says the gear doesn’t have to be high-priced, though. “If you understand how laser works, you can find equipment that is reconditioned or perhaps not the newest on the market, yet still provides the benefits of the latest models.”

Give it a try
Brown, at Coronation Chiropractic, bought a mid-priced model and is happy with it. She points out that patients sometimes wonder if the therapy is working since it’s painless. And yes, sometimes patients have seen those articles online that question the efficacy of LLLT. Yet, she usually doesn’t have much trouble convincing patients to try it.

“The longer I’ve been using it, the better ability I have to cite research and personal experience. I have seen patients for whom this does not work, I’ll be honest, but I also see a fair number of people for whom it does help. So let’s give it a try.”

Stefan Dubowski is a freelance writer based in Ottawa. You can reach him at dubowski@stiffsentences.com.
Print this page