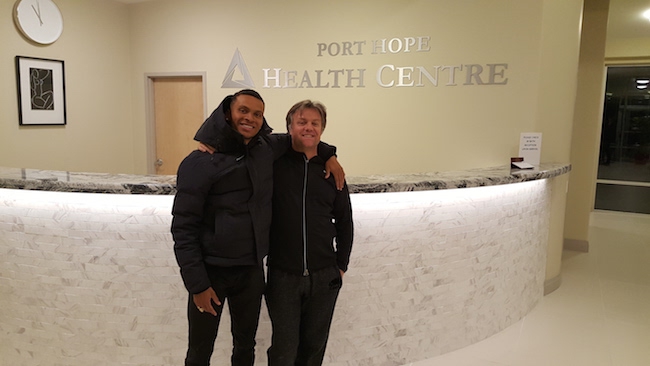 Behind Canada’s Olympians is the usual entourage of patriotic fans, dedicated coaches, supportive family and friends. Not to be overlooked, however, is a medical support staff attentively standing by the sidelines to ensure that Canadian athletes are in optimal health for the competition.

They include chiropractors, who have travelled alongside many athletes — from superstar sprinter Andre De Grasse to Olympic-winning high jumper Derek Drouin — in past competitions, and are doing so again at the 2016 Summer Olympics in Rio.

Chiropractors Dr. Alban Merepeza, of Port Hope, Ont., and Dr. John Vargo, of Sarnia, Ont., filled two spots on Athletics Canada’s medical team at Rio 2016. Another chiropractor, Dr. Josh Binstock, who happens to be an Olympian, will be squaring off against the world’s top beach volleyball players. At an unofficial capacity, Binstock says, he’ll be caring for his own partner, Sam Schachter.

As athletes themselves, the three practitioners say they have experienced firsthand how chiropractic treatment could make a difference in an elite athlete’s performance.

Binstock, who hails from Richmond Hill, Ont., says he’s in a unique position to understand and empathize with how athletes manage their pain. “A lot of my colleagues at school, they could learn from a book and write an exam, but they don’t know how much pressure to give, what structure to really push and what it feels like to have this discomfort,” he says.

High-stress events, such as world championships, also call for a slightly different approach.

“People are a little more anxious, so you have to tone them down, make them more relaxed,” says Vargo. “It adds a different element to the normal aches and pains.”

Growing up, Binstock found chiropractic treatment to be the most effective in helping him rebound from sports injuries. This exposure persuaded him to pursue chiropractic work. “I knew how I felt after being treated,” he says. “I just wanted to help other people feel that way as well.”

Similarly, Vargo credits his own chiropractor, the late Gary Hare, for inspiring him to marry his love of sports and medicine. Throughout high school and university, Hare treated him for basketball- and football-related injuries.

“He took care of all my injuries,” says Vargo. “I couldn’t have been happier. He inspired me to do what he did.”

For Merepeza, it was a “natural progression” to transition from his soccer career to chiropractic care. Initially, he looked after local soccer teams, expanded to hockey and swimming, before graduating to the big leagues—recruited to serve at international competitions.

Road to Rio
Rio is Merepeza’s fifth round at the Olympics, starting with Beijing 2008. Team Canada’s sprinters are his regulars; he’s witnessed De Grasse’s evolution from accidental sprinter to Canada’s fastest man.

Having worked for other Olympic delegations, Merepeza was invited to apply to join Athletics Canada’s medical staff. His credentials, coupled with his experience working with Olympic hopefuls, clinched it for him.

In the four years leading up to the Games, the staff is brought on board so athletes have an opportunity to get to know them. They tag along at various competitions to see if they work well together.

“[Athletics Canada] has done a great job of building a team of coaches familiar to them,” says Vargo, “so they have this built-in comfort zone.”

It was Vargo’s sports fellowship and experience treating NHL players and Sarnia, Ont.’s hometown heroes, such as middle-distance runner Hilary Stellingwerff, which made him an asset.

“If you’ve been in the trenches with them for the last few years,” says Vargo, “they know who you are and are more likely to sit down and talk to you.”

Meanwhile, Binstock endured a lengthy process to score the second—and final spot—for men’s beach volleyball, barely a month ago. He earned his Olympic berth in a hard-fought showdown in July at North Bay, Ont.

To get there, Binstock dutifully split his time between training for Rio and treating patients. He carved out blocks of time for each activity: practices from 8 a.m. to 10 a.m., workouts from 12 p.m. to 2 p.m. and appointments from 3 p.m. to 8 p.m.

Binstock stuck to his regimented schedule for a while, but he suffered abdominal tear, which made him realize he couldn’t do it all. “I had to stop working this past year because the rehab process itself was so time-consuming, in addition to the training.”

Apart from the prized opportunity to face off against the best of the best in beach volleyball, Binstock relishes moments when he gets to watch others perform at their peak.

“I just love connecting with different athletes from around the world,” says Binstock. “You appreciate each other’s sacrifices and understand their way of life.”

And for Merepeza and Vargo, the joy of witnessing athletes who they’ve long cared for perform on the world stage, is one that never loses its lustre. “The greatest thing for me is I’m following people I’ve been treating for the ultimate event,” says Merepeza.

While they’ll be working around the clock, paying visits after hours to athletes’ hotels, Vargo hopes to catch glimpses of their performances. In a way, it’s like seeing their handiwork in action, with every strain or tension in the muscle that is relieved, athletes are able to progress to new levels.

“It’s a really exciting time in the world of chiropractic,” he says. “The athletes drive the machine—we don’t decide how many treatments are required. Their utilization of our services is what helps drive the machine.”

The world may be on heightened alert with the threat of the Zika virus, but the three chiropractors aren’t personally concerned, saying it largely affects those who are pregnant and planning on starting a family.

“I doesn’t faze me, but I do feel a concern for the younger athletes,” says Merepeza. “But I think there are enough precautions.”

Vargo says the medical team has been briefed extensively on how to minimize the threat and is in contact with the World Health Organization. Athletes have a supply of long-sleeve clothing laced with bug repellent and bug spray to keep mosquitoes at bay.

“If you were pregnant, you just don’t do it,” says Vargo. “Some athletes have weighed the options. … But the parameters suggest that if you follow precautions, you should be OK.”