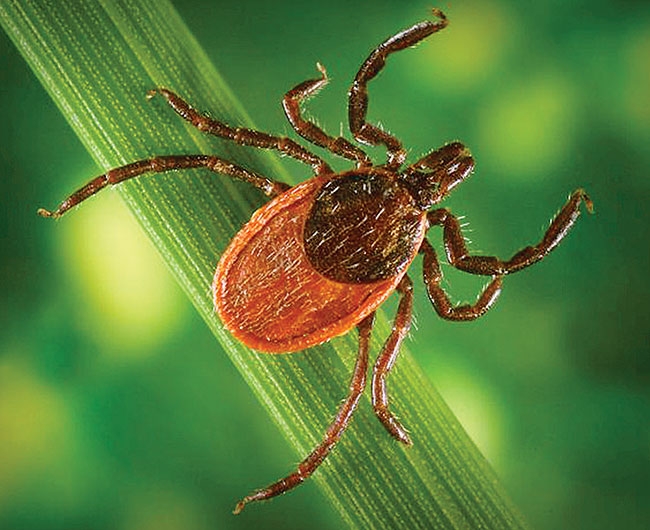 It was never my intention to learn everything I could about Lyme disease, but a tick no bigger than a poppy seed made that a necessity for me. My Lyme disease journey began with a trip to a retreat centre set in the beautiful Berkshire mountains of Massachusetts in 2011.

At the time, I didn’t know that Massachusetts was a hotbed of tick activity. I didn’t connect the dots that a tick carrying Lyme disease had bitten me. I just felt increasingly ill, with bizarre symptoms that didn’t fit any clinical picture I knew of. Eventually, I had to leave my practice for 18 months. It wasn’t just the Lyme disease illness that took me out, it was the two autoimmune disorders it caused, including Lupus. Little has changed since then except for the fact that I can now practise part-time for 12 hours per week, instead of my usual 70. (I had a busy human practice as well as my animal practice adjusting horses and small animals). But I’m grateful for those 12 hours. I’ve had a round or two with cancer in my lifetime, and I can honestly say that my dance with cancer was “easier.” Not that I’d do that again, but with cancer, there is a beginning (diagnosis), a middle, (treatment) and an end (hopefully a cure, or remission). With Lyme disease, it doesn’t seem to follow that pattern, unless you have acute Lyme disease instead of chronic (also referred to as persistent) Lyme disease. In acute Lyme disease, the patient sees the tick, the bull’s-eye rash (also referred to as erythema migrans, which is always pathognomonic of Lyme disease) and is treated with doxycycline (the antibiotic of choice for spirochetes) for four to six weeks. If this protocol is followed, the patient will make a full recovery.  Unfortunately, the same cannot be said about chronic Lyme disease, where the patient doesn’t realize they have been bitten by an infected tick. Research out of Mount Allison University in New Brunswick suggests that only 10-15 per cent of individuals who encounter a tick bite actually see the tick and the bull’s-eye rash. So that leaves many patients with Lyme disease who don’t know they have it. That’s where we come in as chiropractors. Not necessarily so we can diagnose chronic Lyme disease, but so that we can listen to the list of symptoms the patient presents with and think: “Hmmm, is this possibly Lyme disease?” If and when that may be the case, we can begin to help them find the answers.

The tick lifeline
Ticks are not born with Lyme disease. Their first meal, as a larva, is usually the culprit. White-footed mice are their preference, and often the carrier.  Once nourished, the larvae transform into a nymph, and eventually an adult who then lays eggs. On average, the tick life cycle is two years. Most young ticks are too small for us to see, which complicates the situation. If you don’t see it, you may not know it has latched on and is feeding on you, your dog or your cat. A tick that has been feeding on its host looks almost like a swollen raisin because they are engorged with blood. To see the proper way to remove a tick, visit the Canadian Lyme Disease Foundation website (canlyme.com). The most important thing to note here is that not all ticks (brown- or black-legged) carry Lyme disease, but all Lyme disease seems to have one source – ticks.

Four main Borrelia bacteria cause Lyme disease: Borrelia burgdorferi and Borrelia mayonii in North America, and Borrelia afzelii and Borrelia garinii in Europe and Asia. In North America, the Lyme spirochete first made an appearance in Old Lyme Connecticut (hence the name), in the 1970s. It actually took several determined mothers, concerned about their ill children, to get the U.S. government to come to the town and test the residents, water, air and land. It took several years, but eventually, the cause was determined [the bacterial spirochete, Borrelia burgdorferi(BB)]. Eventually, all Lyme disease in North America became associated with BB.

Clinical symptoms
As chiropractors, are we likely to see Lyme disease in our office? Well, the answer is yes and no.  We may see the bull’s-eye rash during a patient examination, but most of the time, a patient with the rash ends up seeing their medical doctor.The clinical symptoms of acute Lyme disease usually include, but are not limited to flu-like symptoms: body aches, fever, chills and swollen cervical lymph nodes; headaches, fatigue and lethargy, and possibly a stiff neck. It’s most likely we will see patients who are suffering from chronic Lyme disease.

Once past the acute stage, the diagnosis of chronic Lyme disease is based firmly on the patient’s clinical presentation. A partial list of clinical symptoms (to name just a few) in the chronic Lyme patient may include chronic flu/cold-like symptoms; headaches; dizziness/light-headedness; shoulder, knee, hip, groin and/or TMJ pain; nausea; night sweats; skin sensitivity; neuropathies; muscle weakness; and vestibular complaints. That does describe many patients who walk into our offices, doesn’t it? A positive Western Blot test will confirm your suspicions. (Discussed below.)

After the initial infection, if not diagnosed for what it is, the BB bacteria will seek an area rich in nutrients to settle into, for the long haul. This is ideally (for the bacteria, but not for the patient) a joint or organ that has been injured. This can be an arthritic joint (usually large joints such as knees), inflamed/injured tissues or inflamed/injured organs where they feed off of the nutrients our bodies produce to try and heal the inflammation. Or it may lead to the destruction of the joint so that it has an abundant nutrient supply.

If it is not discovered/diagnosed or treated within the first 30 days, the BB bacteria will do several things. First, it will surround itself with a virus like a cell membrane, which protects it from further medical intervention/treatment. The bacteria also form a biofilm, which makes them even hardier, lading to cysts forming around these new colonies of bacteria. These three things develop as an attempt to confuse and deter the immune system, and unfortunately, it works. Treatment beyond the initial 30 days (at which point the bacteria begins to reproduce), can rarely successfully resolve the infection, leading to persistent infection and chronic illness.

Treatment options
There is considerable controversy around the diagnosis of Lyme disease. The Center for Disease Control (CDC) states that treatment for acute Lyme disease is entirely successful when positive blood work for the infection (enzyme-linked immunosorbent assay or ELISA, and a Western Blot Test) are present, along with the signs and symptoms. Those unfortunate enough to unknowingly have an infected tick bite may not be diagnosed for years, as in my case. In Canada, the medical establishment will not perform a Western Blot Test on chronic Lyme patients. Your patient will have to seek out one of the reputable blood labs in the U.S. for that. As a side note, if you suspect your dog or cat has Lyme disease you can take them to any veterinary doctor in Canada, and they will perform a Western Blot test for Lyme disease, but humans still can’t be tested here. The main reason that the Canadian medical establishment doesn’t currently acknowledge chronic Lyme disease is that the CMA follows the CDC guidelines that state that chronic Lyme disease is rare, though the American College of Rheumatology refers to chronic/persistent Lyme disease as post Lyme disease syndrome (or PLDS), suggesting that it presents with its own array of complications. Literature in the medical realm indicates that long-term antibiotic use for PLDS is unwise and puts the patient at risk for superbugs.

I recommend that ALL ticks be removed from two-legged (or four-legged, in my case) patients be sent away for testing. Most of us have read at least a little about the prevention of Lyme disease, which in general refers to avoiding areas inhabited by ticks, like areas with tall grasses and brush.  Prevention also lists the use of deet insecticides, wearing light coloured clothing, long sleeves and tucking your pants into your socks when outdoors. In reality, ticks can be anywhere – even letting your grass grow too long in your backyard and having several bird feeders (since migrating birds are the source of southern infected ticks) puts you at a higher risk for a tick bite. It’s also been said that Lyme disease is the next epidemic. In a 2005 study published in Ecohealth, researchers examined the effects of climate change and Lyme disease risk. They determined that black-legged ticks (which transmit Lyme disease) would see a 213 per cent increase in suitable habitats in Canada by the 2080s. Let’s see if we can change this Lyme disease risk.

Dr. Susanne Langdon is a 1986 graduate of CMCC, and became certified in Animal Chiropractic through the Options for Animals Program in 1991. Her life took a dramatic turn in 2011, when she was infected with the Lyme disease bacteria. Dr. Langdon continues to practice part-time, as well as lecturing and writing about the importance of diagnosing and treating chronic Lyme disease.