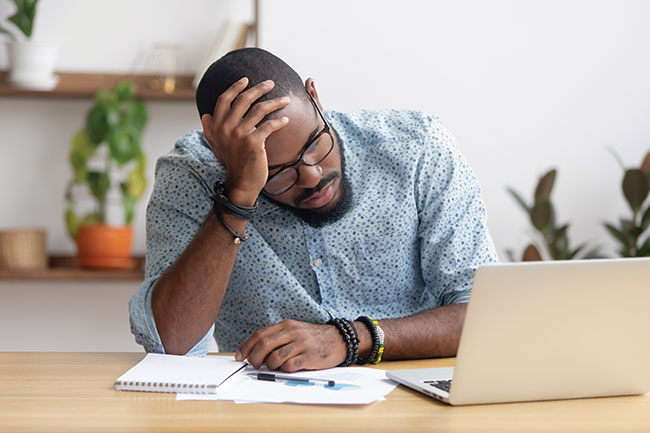 Both personal factors and the time of day play a role in neck strength and endurance, according to a new study.

The researchers found that while poor neck and head postures are the primary determinants of neck pain, body mass index, age, and the time of the day also influence the neck’s ability to perform sustained or repeated movements.

With roughly 80% of jobs being sedentary, often requiring several hours of sitting stooped in front of a computer screen, neck pain is a growing occupational hazard. Smartphones and other devices have also caused people to bend their necks for prolonged periods. But the new research suggests bad posture is not solely to blame.

“Neck pain is one of the leading and fastest-growing causes of disability in the world,” says Xudong Zhang, professor in the industrial and systems engineering department at Texas A&M University.

“Our study has pointed to a combination of work and personal factors that strongly influence the strength and endurance of the neck over time. More importantly, since these factors have been identified, they can then be modified so that the neck is in better health and pain is avoided or deterred.”

According to the Global Burden of Disease Study from the Institute for Health Metrics and Evaluation, neck pain is ranked as the fourth leading cause of global disability.

One of the main reasons for neck pain has been attributed to lifestyle, particularly when people spend long durations of time with their necks bent forward. However, Zhang says the research has lacked a systematic, quantitative study on how personal factors, such as sex, weight, age, and work-related habits, can affect neck strength and endurance.

For their experiments, Zhang and his team recruited 20 adult men and 20 adult women with no previous neck-related issues to perform controlled head-neck exertions in a laboratory setting. Instead of asking the participants to hold a specific neck posture for a long time, similar to what might happen at a workplace, they performed “sustained-till exhaustion” head-neck exertions.

“In the laboratory, conducting experiments where subjects do long tasks with their neck can take several hours of data collection, which is not very practical for the experimenters and, of course, the participants in our study,” says Zhang. “To solve this problem, our experiments were strategically designed to mimic workplace neck strains but in a shorter period of time.”

In these exercises, subjects were seated and asked to put on an augmented helmet that allowed them to exert measurable force by the neck. Then, the researchers asked them to either keep their necks straight or maintain their neck tilted in a forward or backward position.

In this position, researchers applied force to their head and neck on an adjustable frame. This exertion was either to their maximum capacity or half of it. Before testing, the researchers noted the subjects’ age, body mass index, and the time of day.

When Zhang and his team analyzed the data, they found that, as expected, work-related factors like head/neck posture play a very important role in determining both neck strength and endurance. But they also observed that while there was no significant difference between male and female subjects in neck endurance, body mass index was a significant predictor of neck endurance. Also, to their surprise, the time of day affected the neck’s ability to sustain an exertion without fatigue.

“It is intuitive to think that over the course of the day, our necks get more tired since we use it more,” Zhang says. “But roughly half of our participants were tested in the morning and the remaining in the afternoon. Also, some of the participants had day jobs and some worked the night shift. Despite this, we consistently found the time-of-day effect on neck endurance.”

The researchers say their database of neck strength and endurance is also necessary for building advanced musculoskeletal biomechanical models of the neck, which researchers can then use, for example, to tease apart specific neck muscles more vulnerable to injury.

“Looking ahead, we might have the data to begin evaluating if patients recovering from neck injuries are ready to return to work based on whether their neck strength and endurance are within the norm,” Zhang says. “Also, engineers and designers could utilize our data to make wearable devices, like helmets, that are more ergonomic and less stressful on the neck.”

The study appears in the journal Human Factors. Additional coauthors are from Texas Tech University and Texas A&M. The National Institute for Occupational Safety and Health, part of the Centers for Disease Control and Prevention, funded the work.

Related
Computers can be a real pain in the neck
Tai Chi can help with neck pain: study
Athletes should build neck strength to avoid concussions, Rutgers researchers recommend
Tattoo artists’ job a pain in the neck: study