Faced with the epidemic of opioid addiction, researchers have been charged with finding other strategies to treat pain. Their efforts largely have focused on nerve cells that transmit pain signals to the spinal cord and brain. But new research, led by scientists at Washington University School of Medicine in St. Louis, shows that targeting receptors on immune cells may be more effective, particularly for chronic pain.

Recently, a non-opioid, investigational drug called EMA401 has shown promise as a treatment for lingering nerve pain following shingles infection. While trying to understand how that drug helped control pain, the Washington University research team was surprised to find that it doesn’t hit nerve cells; rather, it targets a receptor on immune cells.

Their findings were published July 2 in The Journal of Neuroscience.

“We are in dire need of good pain-killing drugs, particularly non-opioid drugs,” said principal investigator D.P. Mohapatra, associate professor in anesthesiology. “Generally, scientists have the understanding that targets for treating pain must be within the nervous system. It turns out that the target here is not on nerve cells, but on immune cells called macrophages.”

The investigational drug inhibits the angiotensin II type 2 receptor that is targeted by medications that lower blood pressure. Angiotensin is a hormone that causes blood vessels to constrict, increasing blood pressure.

This drug was thought to work by interacting with the type 2 receptor on nerve cells — the same cells that carry pain signals. But when Mohapatra and his colleagues at the Washington University Pain Centerlooked more closely, they found that theory was wrong.

“When we took nerve cells from mice, put them in a culture dish and added the angiotensin hormone, nothing happened,” said co-investigator Andrew Shepherd, PhD, an instructor in anesthesiology. “There was no angiotensin type 2 receptor on sensory neurons, so pain signals couldn’t be transmitted.”

But in other experiments in which they injected the angiotensin hormone into mice, the animals indicated they felt pain and withdrew their paws when touched.

When the researchers reduced the number of macrophages in mice, the animals didn’t appear to feel pain in response to an angiotensin injection. But as the macrophages repopulated over the course of a few days, the response to pain returned. To support these observations in mice and the culture dish, the researchers also have found increased numbers of macrophages alongside degenerating nerve fibers in skin biopsies taken from the legs of patients who have diabetic neuropathy. 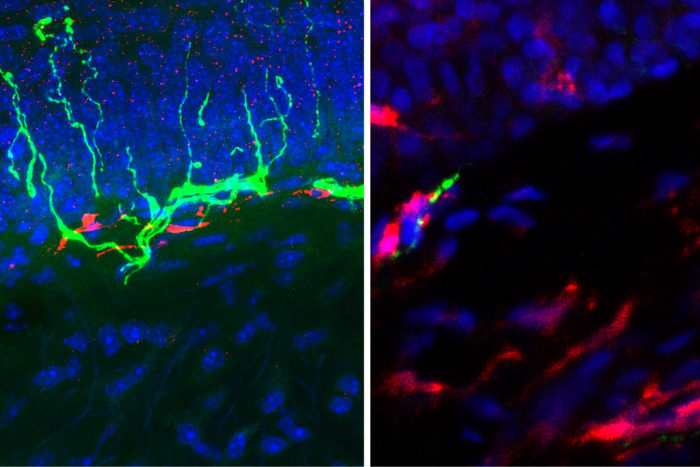 Increasing the number of potential targets for painkillers and including targets such as receptors on immune cells may make it possible to develop more effective painkilling drugs with fewer side effects, Mohapatra said.

“The beauty of this drug is that, unlike an opioid, it doesn’t cross the blood-brain barrier, so right away you eliminate a number of potentially harmful side effects, including addiction and the potential for abuse,” he said. “And by widening the scope of potential targets to macrophages, it may be possible to develop more effective therapies for chronic, neuropathic pain.”

This article was originaly published by the Washington University School of Medicine in St. Louis