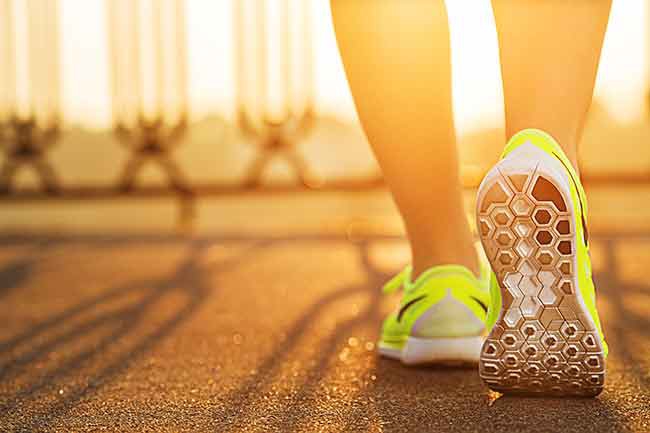 Not surprisingly, workers whose job requires them to stand for many hours a day commonly experience foot pain and discomfort. This can ultimately lead to other implications of the foot and the kinetic chain.

A paper published in the Journal of Prosthetics and Orthotics in 1989 claims approximately 75 per cent of Americans have reported foot problems in their life (“Computer aided design and computer aided manufacturing of foot orthoses” by T.B. Staats and M.P. Kriechbaum). The most common problems associated with foot pain are ankle, leg, knee, hip and spinal disorders in people who spend many hours standing, according to studies published in 2005 in the Journal of Chiropractic Medicine (“Chiropractic adjustments and orthotics reduced symptoms for standing workers” by J. Zhang) and in 1987 in the journal Orthopedics (“Effect of viscoelastic insoles on pain” by R.E. Tooms, R.W.Griffin and P. Green).

There are researchers and health-care practitioners who believe foot orthotics are effective in managing problems of the feet and lower extremities, and in relieving low back pain. H.J. Dananberg and M. Guilliano investigated this approach in their study published in the Journal of the American Podiatric Medical Association in 1999.

However, according to a recent PubMed search, there are less than three non-case report studies examining the combination of chiropractic care and orthotics for relieving foot and foot associated pain. The author, a chiropractor, speculates that spinal and extra-spinal adjustments function synergistically or complementary  with orthotics. This is theorized because chiropractic care improves restricted joint mobility, and reduces muscle tension, which shortens the break-in time for using orthotics. Some believe foot orthotics are important for the body’s entire kinetic chain, through supporting body mechanics.

One study by Stude and Brink supported the idea that foot orthotics enhance balance, performance and reduce fatigue. In the study, published in the Journal of Manipulative and Physiological Therapeutics in 1997, the researchers described that golfers wearing orthotics for over a period of six weeks had less foot fatigue and gained a seven per cent mean increase in club-head velocity.

Another study of postal workers performed by Carley revealed a 67 per cent reduction in foot, knee or back pain. Carley’s study was published in Biomechanics in 1998.

A more recent study, in 2011, demonstrated that custom foot orthotics were beneficial to patients with chronic low back pain after six weeks of use. This randomized controlled pilot study, by Cambron, Duarte, Dexheimer and Solecki, was published in the Journal of Manipulative and Physiological Therapeutics.

However, some of these studies on foot orthotics remain inconclusive because they lack controls, and appropriate sample size. In their paper titled, “Efficacy of foot orthoses. What does the literature tell us?” authors Landorf and Keenan note different patient conditions and comorbidities, orthotics casting, and outcome assessments also make the effectiveness of these studies difficult to evaluate. Their paper was published in 2000 in the Journal of the American Podiatric Medical Association.

Custom orthotic materials
When I taught anatomy classes for a prosthetic and orthotic school, the students would ask why chiropractors called it an “orthotic.” Chiropractors typically call it an orthotic, but it really should be referred to as a foot orthotic or foot orthoses. For the sake of simplicity the word orthotic has been used throughout this article.

A custom orthotic is a shell or support made out of various materials which, when placed in the shoe, supports the foot and maintains normal foot function. It usually extends from the heel to just distal to the metatarsal heads. Custom orthotics should not be confused with prefabricated arch supports.

To start the orthotic process, a biomechanical evaluation of the lower extremities, and some form of scanning or casting of the feet will take place. Based on your evaluation, the doctor will write a prescription detailing the choice of materials (rigid or flexible), the proper biomechanical alignment or tilt of the orthotic, any cushions or modifications, and take into consideration the patient’s
complaint, occupation, sport and preferred shoe.

Advances in plastics and materials science have significantly improved the design and manufacture of foot orthoses over the past couple of decades. Novel composites and hybrid plastics will offer lighter, stronger and more customizable devices. Practitioners and fabricators already have a dizzying array of materials at their disposal, including thermoplastic polyolefins (poly­propylene, polyethylene and copolymer combinations of them); polyethylene foams (e.g., Plastazote, Nickelplast); open-cell polyurethane foam (Poron); ethylene vinyl acetate (EVA); closed-cell neoprene foam (Spenco); thermoset carbon-fiber composites; and others, such as natural and artificial cork.

Now this may seem overwhelming, but why prescribe an orthotic device if you don’t know which material is used for a particular condition? Have you ever noticed that the orthotic you order from a company is made of the same material? Do you know what it is? Does the company offer different material options? This is a great opportunity to call your fabricator and ask questions or ask for an in-service learning session. If you live near the lab, attempt to check out the fabrication process.

The main construct of the orthotics is typically classified into shank-dependent (i.e. various foam products) and shank-independent materials (i.e. thermoplasts and carbon composites). The shank-independent type is what we see in most chiropractic orthotics. This type of stiffer material applies a higher reaction force, which in some circumstances might be beneficial; in others, it might not. The two biggest considerations when selecting the right orthotics for a patient are weight – more thickness in millimeters for a heavier patient – and activity level.

Evidence-based management
Podriatrists and pedorthists claim there are four common conditions that they treat, and for which foot orthotics have the most potential to help patients. These include: plantar fasciitis, arthritis, diabetes and metatarsalgia.

1. Plantar fasciitis. The patient will typically complain of pinpoint pain at the medial tubercle of their calcaneus, which is worse upon walking in the morning. There are three modifications that I typically add to every patient with plantar fasciitis. The use of a semi-rigid polypropylene shell with a standard heel cup, and valgus extension will help to support the lateral forefoot, decreasing plantar fascia tension

2. Arthritis. Heredity arthritide conditions can create a common painful inflammation of the foot, and so can chronic instability. Those that have suffered with or still have chronic ankle sprains may have ankle instability, which could lead to a degenerative foot joint condition. Metatarsal or transverse arch modification is perhaps most important, and the degree of this modification in terms of size and depth parallels the severity of metatarsalphalangeal joint subluxation and metatarsal head depression. This modification provides support to uplift the depressed metatarsal heads and reduce trauma at the push-off phase of the gait cycle. It also meets the objectives of maintenance and support of existing arches in some cases, re-establishment of fallen arches in other cases, and better distribution of weight bearing loads.

3. Diabetes mellitus. This condition interferes with circulation and nerve innervation to the feet. Patients with diabetes require special consideration. Because of the ulcer risk associated with diabetes, insole materials have been closely studied in these patients. A common mistaken concept is that they need a “soft” orthotic. The result of this is that the pressure applied to the bony prominences, which are the areas of greatest risk for pressure sores, is increased. Ideally, ask your orthotic company to build something with thermoplastic. Then use cork to get a firm push into the fleshy arch, which is at low risk for ulceration. This will decrease pressures over the heel and metatarsal heads. If needed then you can add a soft-top cover to provide extra cushioning (i.e. 4-mm Plastazote covering). For those who plan to or are practicing in the United States, Medicare (the federal health program for those over 65 years of age) covers diabetic shoes, orthotics and modifications if they meet certain criteria.

There are a lot of consistent, positive, evidence-based treatment and management strategies to support the use of foot orthotics for the four conditions outlined above. Other potentially treatable conditions include patellofemoral knee pain, anterior interosseous membrane syndrome, achilles tendonitis, bunions and discomfort of the low back and hips.

Excessive pronation
A common scenario in which both the patient and even practitioner might believe orthotics are needed is with a pes planus diagnosis. When chiropractors decide to make an orthosis out of hard plastic, they have already determined that the orthosis has to end posterior to the metatarsal heads. If this is the case, it means there can’t be effective posting in the forefoot. I see this a lot when the doctor is trying to correct for an excessive pronator. Typically, they will pick a rigid material to control the excessive motion, but in many cases, what’s driving that pronation is excessive forefoot varus and/or weak gluteus medius muscles. If a rigid orthotic is dispensed to the pronated patient they may complain of discomfort, because without the forefoot post their feet will be crashing into the orthotic’s arch.

To solve this problem, ask for the medial forefoot post. I would give them a medial forefoot post to address the problem directly. In addition, for most patients, when I cast (I used to use plaster, now foam) I dorsiflex the toes, place the foot into a sub-talar neutral position, and attempt to cast the foot so that it maximizes the lateral and medial midfoot arches.

Despite the benefits, orthotics is not risk-free. The risk is not large, however, and so not much needs to be said about it. Good or bad, they can be difficult for a body to adjust to, disrupting fine-tuned postural adaptations and forcing awkward new ones.

I urge those dispensing orthotics to their patients to take time to look at a variety of different manufacturing labs. Understand the different materials and thicknesses used, and different modifications that can be added. Most large fabricators conduct classes (online and hands-on) that can be taken. Smaller labs tend to offer tours, and have
certified orthotists available for
questioning.

Dr. Jennifer Illes, DC, is assistant clinical professor at D’Youville College’s Chiropractic Program. She has practised in Ontario, Florida and New York. She can be reached at rectorj@dyc.edu.