Pain in the tech: Enhancing the cervical curve in the age of texting

Enhancing the cervical curve in the age of texting

These days, many chiropractors are adjusting patients suffering from the effects of overusing their various electronic devices. Everywhere we go, people are engaged with their phones. Some seem completely unable to put the device away.

Researchers are beginning to understand that texting or spending multiple hours on a device releases dopamine in the brain and can be as much of a problem for some individuals as cocaine or nicotine addiction. Young people are most susceptible to become chronic users; upwards of six hours per day of use is not unusual. Chronic use can change the emotional/psychological state of users, rendering them impatient and irritable. Boredom becomes the default opportunity to pick up a device rather than finding something productive to do. Kids are losing the ability of imaginative and free play. Smart phones are great tools and can be very useful and fun, but are wickedly addictive by design.

As chiropractors, we need to offer good advice to our patients on a wide range of issues including their family’s tech habits. Limiting screen time for children is an obvious choice. The latest finding is that cases of myopia in children are rapidly increasing due to eyes focused close up and not enough outdoor time focusing far away. Teenagers have enough going on without being sleep deprived, so do them a favour and require phones turned off at bedtime.

Enhancing the cervical curve
Certainly, overuse of these devices has serious repercussions for causing neck problems (as well as wrist and thumb repetitive strain injuries). Here I’ll present a simple technique to improve cervical spine function to comfort your patient beyond the usual measures you take to adjust them. This technique is called “Enhancing the Cervical Curve” (ECC).

Between T1 and T4 the thoracic kyphosis transitions into the cervical lordosis. While we consider the primary action of T1 to T4 to be flexion/extension of the neck and head, these levels also contribute to rotation of the cervical spine. To illustrate, reach back and touch the spinous interspace of your T1/T2 and rotate your neck from one side to the other. You will notice there is movement at this interspace as it participates in rotation. Hypo mobility at one of these upper thoracic segments (T1-T4) may compromise the base of the cervical curve and hinder rotation. Having the head tilted down for extended periods to operate an e-device will potentially result in subluxation of the upper thoracic spine. The following technique is an interesting way to correct this.

in a given visit, especially in a small area. This is one reason why we sometimes adjust a patient twice in one day. 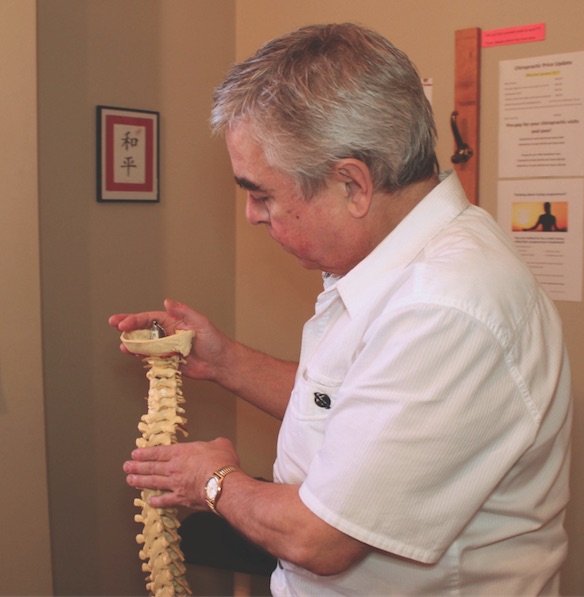 If the segment will not adjust manually and is hypo mobile in extension, then consider doing the following to enhance the cervical curve and increase rotation bilaterally.

Sit the patient at the end of an adjusting table equipped with a pelvic drop piece mechanism. Have the patient lie supine with a pillow covered with face paper under their head so that the spinous interspace of the hypo mobile thoracic segment is 5cm caudal to the gap between the thoracic and pelvic panels of the table. The patient’s legs may hang down off the end of the table or with knees bent and feet up on the table if there is a low back problem.

Place your hand under the spine with thenar contact on the spinous of the hypo mobile segment. The patient’s arms are crossed over their chest. With a broad contact over the patient’s arms use the drop piece at light tension to set the segment P-A and I-S to enhance the cervical curve. Do this three times in succession.

Sit the patient up and check the active rotation of their neck to the end point right and left. If the procedure was successful, you will observe a symmetric increase in active rotation commonly eight to 10 degrees and as much as 20-40 degrees bilaterally. Yes, this means their rotation may improve noticeably   and in some cases miraculously.

Quite often the patient will be delighted and surprised that such increased comfort and range of motion has resulted from a seemingly noninvasive intervention. This procedure is highly applicable for patients who text heavily, or are on devices excessively. It is also very helpful in many cases where osteoarthritis precludes neck adjustments. In some cases if you do this technique first, you may not have to adjust the cervical spine if active rotation becomes 90 degrees bilaterally.

Recently I treated a new patient who had a lower cervical discectomy and anterior arthrodesis (fusion) eight years ago. Opon the first exam, his active cervical rotation was 60 degrees bilaterally and very uncomfortable. Without the opportunity to adjust his lower neck due to the fusion, I applied the ECC technique to the T2 segment on his third visit. I was amazed and surprised that the active cervical rotation was 90 degrees bilaterally and the patient was instantly much more comfortable moving his neck.

I hope readers will employ this valuable approach in the quest to correcting the cervical spine.

Dr. Paul Hunter has been presenting Fill Up Your Toolbox Chiropractic Technique seminars since 2008. You can reach him at Fillupyourtoolbox.ca
Print this page