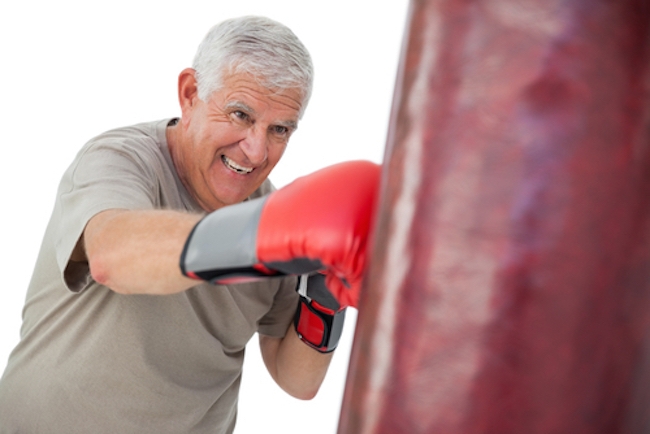 She’s 79 and has taken up boxing as part of her own personal title bout against the ravages of Parkinson’s disease.

Parkinson’s is a progressive disorder of the nervous system that makes it hard for people to control their movements, body and emotions.

It develops gradually, sometimes starting with a barely noticeable tremor in just one hand. Over time, medication becomes less effective and symptoms become worse. Parkinson’s is the second most common neurodegenerative disorder in Canada after Alzheimer’s disease.

“I had it quite a while before we realized that was what it was, but I didn’t go onto medication until 2012,” says Jager.

“This has helped a lot. My posture is better; my energy is better. I did a lot of exercising before I got here but I couldn’t get past a certain point. I just couldn’t get any further until I came here.”

“Here” is what amounts to a boxing boot camp at Calgary’s Grizzly Cage Boxing and Fitness where Darcy Irwin is both a part-time drill sergeant and sometime cheerleader as she puts her eight charges through their paces.

“Three squats,” she yells at Bob Charles when he ends up losing a game similar to musical chairs in which a soccer ball is passed from hand to hand. The others immediately begin jumping jacks.

“They say you don’t get diagnosed until about 80 per cent of the damage is done,” says Charles, who began the boxing program last fall. “When you’ve got something like Parkinson’s, you can’t always do things the way that they’ve designed them, but a good trainer like Darcy can modify things and make sure you don’t get hurt.”

Irwin, who runs the gym with her husband Wayne Richardson, says the boxers put up with the aerobics and jumping rope but really can’t wait until they can start working out on heavy punching bags.

“It’s such a difference from what it was when they first came in. Particularly when I watch them warm up, I see each person’s progress slowly changing and that’s a really nice moment,” Irwin says.

“We’re starting to realize that the mind and the body are acting as a whole more than ever.”

There’s a slightly more restful atmosphere across town where about 25 Parkinson’s patients are rocking slowly, back and forth to music at Decidedly Jazz Danceworks.

Jim Archibald, 69, was diagnosed five years ago after spending years on the stage as an actor.

“This is the first real dancing that I’ve ever done,” he confides. “It’s something to look forward to every week.

“Physically, with Parkinson’s, it’s a stiffening of joint muscles and things as it progresses. This certainly helps delay it and makes it much better.”

Vicki Willis, one of the founders of Decidedly Jazz Danceworks, says she initially only agreed to help set up the program but got hooked.

“It has been so soul-feeding to do this. I love the challenge of trying to figure out ways through their blocks and through their habits and I love them all madly,” says Willis.

“It’s a beautiful thing. One of the participants said, ‘This is our tribe.’ They love coming together. They look forward to this. Depression is a huge part of the disease and it’s lovely for all of us to get together.”

He is currently looking at Ambulosono therapy, a music-based walking program for people with Parkinson’s that uses specially calibrated iPods to help participants pay attention to how they walk.

“The idea is patients will have a small computer and have a sensor (for) when they walk. If your steps are getting smaller and smaller you tend to fall … (and) there’s an auditory alert or the music will stop to remind you to take bigger steps which are more stable,” said Hu, a member of the Hotchkiss Brain Institute.

“This app … can measure your step lengths through an algorithm and then tell the iPod. The music will stop to remind you that your steps are too small.”

Hu said the number of people in the music walking program is quite small so he is only cautiously optimistic. But initial studies suggest that using the therapy constantly improves a patient’s walking and benefits appear to last.

“If this is true, this is a groundbreaking demonstration that this disease can be beaten … For this particular symptom, it’s equivalent to a cure.”