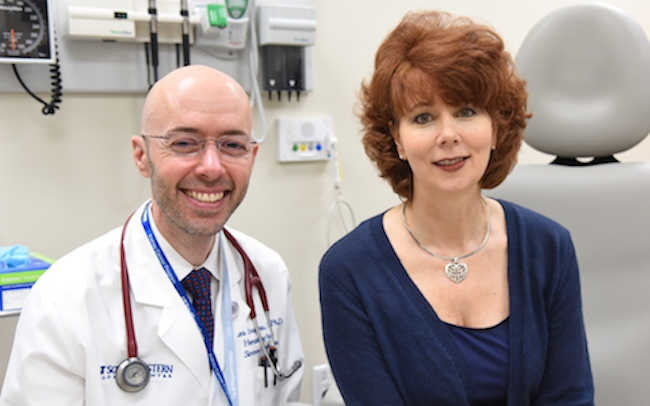 DALLAS, Tex. – Four years ago, Merlinda Chelette was a hardworking ER nurse who suffered from excruciating back pain. When it became too painful to bear, she initially sought chiropractic care, but the pain got worse. Her search for relief eventually led to a radiologist, who found the surprising cause of her back pain was kidney cancer.

“The news was devastating. I had a tumor in my right kidney, which had spread to the spine. Cancer had eaten away 80 per cent of one of the lumbar vertebrae, and it fractured,” Chelette said. “I felt disbelief. No one in my family has cancer.”

Chelette was diagnosed with clear cell renal carcinoma, the most common form of kidney cancer. After completing her initial radiation therapy, she came to Harold C. Simmons Comprehensive Cancer Center to volunteer for a clinical trial and began treatment with sunitinib. She is now celebrating four years of survivorship.

“I’ve kept my nursing license up and I hope to go back to work. Meanwhile, I teach Sunday school to elementary and preschool students,” Chelette said. “I’ve learned that I can still have a good quality of life during cancer treatment – and who knows how long that life might last.”

Nearly 400,000 Americans are now living with a diagnosis of kidney cancer and more than 60,000 people are expected to be diagnosed with kidney cancer this year, according to the U.S. National Cancer Institute. Texas has the fifth highest rate of this cancer in the U.S. and it is the fourth most common treated at the Kidney Cancer Program of the Simmons Cancer Center. Five-year survival rate averages run from 81 per cent for stage 1, when cancer is contained in the kidney, to about 53 per cent for stage three when it has spread beyond the kidney and just eight per cent for stage four, when the cancer spreads to more distant parts of the body or other organs. However, survival rates at the Kidney Cancer Program are better than national benchmarks.

There are no existing methods for early detection of kidney cancer when it is most treatable. It is often found indirectly after it has spread, for example through a scan performed for a different reason, as was the case for Chelette. When her back pain was found to be kidney cancer, it had already spread to the spine, requiring both surgery and radiation.

“She has done quite well on sunitinib for 15 months. Her cancer remains contained, she has not required additional surgeries, and she is enjoying a reasonably good quality of life,” said her physician, Dr. James Brugarolas, Kidney Cancer Program leader at the Simmons Cancer Center and associate professor of internal medicine at UT Southwestern. Chelette was helped by an active volunteer program “and now she is helping others.”

Not only a survivor, Chelette now meets weekly with newly diagnosed patients in the Kidney Cancer Program as part of a patient advocacy program established in conjunction with a coveted SPORE (Specialized Program of Research Excellence) award from the National Cancer Institute.

“The key components of our program are our scientific research, cutting-edge treatments, and clinical trials. Thanks to extraordinary support from the National Cancer Institute through the recent SPORE award, we are excited to ramp up our work on finding new treatments through discovery, and bring them to patients more quickly,” said Brugarolas, Virginia Murchison Linthicum Scholar in Medical Research.

Hearing about all the researchers who are working toward developing new treatments helps patients like Chelette keep a positive outlook.

“Just because you have kidney cancer doesn’t mean your life is over,” said Chelette, a 20-year resident of Arlington, Texas. “It feels good to tell people that I’ve survived for four years. I tell them: Just hang in there and endure the first part of treatment. Don’t get discouraged.”

Many cases of early-stage renal cancer do not cause symptoms. People who do have symptoms with kidney cancer may experience:

Risk factors for kidney cancer include: