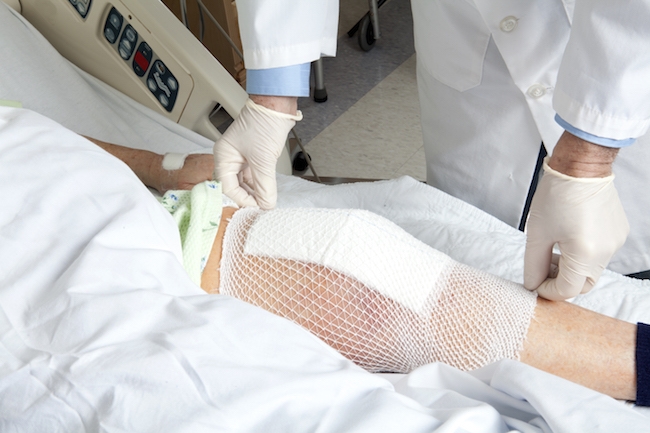 Patients taking prescription opioids before knee replacement operation has poorer pain outcomes six months post-surgery, according to a study published May 17 in The Journal of Bone & Joint Surgery. The journal is published in partnership with Wolters Kluwer.

“Our results should be viewed as a warning that using opioids during the pre-operative period may be problematic due to their negative effects on subsequent TKA outcomes,” comments senior author Elena Losina, PhD, of the Department of Orthopaedic Surgery at Brigham and Women’s Hospital in Boston.

The researchers analyzed data on 156 patients who underwent total knee arthroplasty (TKA) at their hospital between 2011 and 2013. The average age was about 66 years and 62 per cent of patients were women. Average pain score before surgery was about 44 on a 100-point scale, with 100 being the worst score.

During the two years before TKA, 23 per cent of patients had received at least one prescription for opioid pain relievers. Nine per cent had multiple opioid prescriptions. (Nearly all patients received opioids for pain relief after surgery.)

Six months after TKA, pain scores and other outcomes were compared for patients with and without previous opioid prescriptions. The analysis included a “propensity score” to account for other factors associated with an increased likelihood of using opioids.

After surgery, the previous opioid users had a higher average pain score: about 17, compared to 10.5 for those who did not receive opioids. The difference in postoperative pain-score reduction between the two groups was significant after adjusting for pre-operative pain score and other health conditions.

The factor most strongly related to pre-operative opioid use was an elevated score for “pain catastrophizing” – the degree to which a person has exaggerated negative responses to and worries about pain. Losina and co-authors write, “Pain catastrophizing may play an important role in decisions by physicians and patients to use opioids, which then places [patients] at risk for poorer outcomes.”

Patients with painful knee osteoarthritis spend an average of 13 years on medications and other treatments before undergoing TKA. This new study suggests that nearly one-fourth of such patients take opioid pain relievers before TKA.

The findings “support and expand on” previous evidence that pre-operative opioid use leads to worse clinical outcomes after total joint replacement and other major orthopedic surgery procedures. Considering the long duration of knee pain most patients experience before they finally undergo TKA, the study may have important implications for creating appropriate treatment guidelines. Losina and colleagues conclude, “Clinicians and policy makers may consider limiting the use of opioids prior to TKA to optimize post-TKA pain relief.”