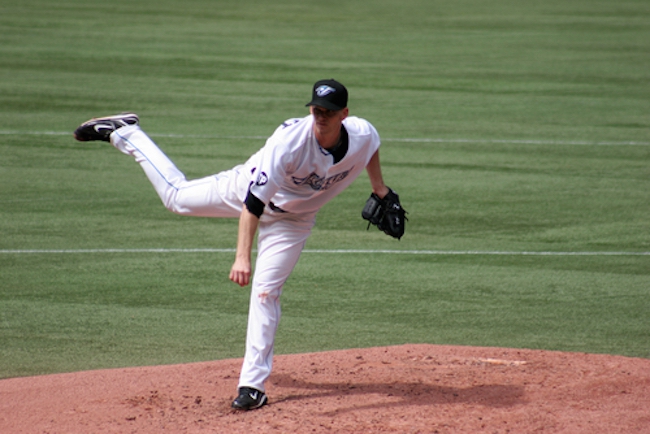 Proposed rule changes by Major League Baseball, designed to speed up the game by reducing time between pitches, could lead to a spike in arm injuries as players have less time to recover between throws, say researchers who have analyzed the impact of fatigue.

Scientists looked specifically at the effect of using a ‘pitch clock’, a controversial concept currently being tested in the minor leagues.

Similar to a shot clock in basketball, a timer counts down between pitches, allowing pitchers just 20 seconds to throw. If the pitcher is too slow, the umpire calls a ball.

“The pitch clock clearly influences the amount of rest between throws,” explains Michael Sonne, an expert in ergonomics and post-doctoral research fellow in the Department of Kinesiology at McMaster University.

While the average time between pitches is currently 22.6 seconds, even a small change could have a major impact, he says.

Increasing muscle fatigue, which is already known to be one of the primary causes of injury to pitchers, can reduce the natural stiffness of the elbow joint, leading to greater strain on the ulnar collateral ligament, or UCL, the ligament that is torn and repaired during the so-called ‘Tommy John Surgery.’

Faced with lower television ratings and weary fans, the MLB has struggled with the length of the average game, which has stretched from 2.85 hours in 2004 to 3.13 hours in 2014.

Still, researchers question the wisdom of rushing the game at the cost of a player’s career.

“In a league where hundreds of millions of dollars are lost in a year to injury, every effort should be made to control known risk factors related to injury. That includes allowing for appropriate rest time between pitches,” says Sonne.

The research is published online in The Journal of Sports Sciences.