Canadian Chiropractic Convention: Networking with colleagues in a spirit of camaraderie. 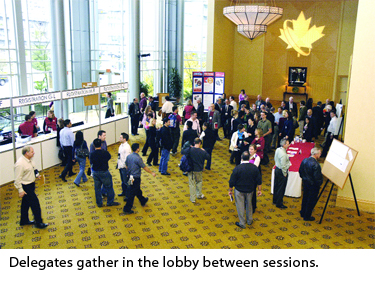 The first national chiropractic gathering in over a decade provided a smooth setting where delegates could engage with their colleagues “to improve the quality of care and neuromusculoskeletal health of Canadians.”  Those words, drawn from Prime Minister Stephen Harper’s welcome to the Canadian Chiropractic Convention, held in Vancouver from November 16 to 18, were mounted at the entrance to level one of the conference facilities.

At the event’s kickoff, Dr. Stan Gorchynski, president of the Canadian Chiropractic Association (CCA), which co-hosted along with the ten provincial associations, called this “an auspicious time” for chiropractic.

Video greetings from Tony Clement, the federal minister of health, noted that chiropractors represent one of the largest health-care professions, with more than 6,000 chiropractors serving over 4.5 million Canadians.  “I believe that chiropractic should also be used at the front end of our system,” said Clement, indicating that musculoskeletal problems spawn $16.4 billion in direct and indirect costs to the economy.  “As chiropractors,” he continued, “you have an important role to play in the early diagnosis and prevention of musculoskeletal disorders as well as the promotion of healthy and active lifestyles.”

The glittering opening night featured comedian Rick Bronson, who acted as emcee, Survivor: Africa winner Ethan Zohn, the spectacular Mediterranean fusion music of Pavlo, and keynote speaker Ian Coulter, PhD, who is currently the director for integrative medicine at the Samueli Institute and a past president of the Canadian Memorial Chiropractic College (CMCC).  Tackling the issue of chiropractic diversity under an umbrella of unity, Dr. Coulter cited American poet and philosopher Walt Whitman: “Honest differences of views and honest debate are not disunity.  They are the vital process of policy-making among free men.”

‘I was so proud to see my friends and colleagues operate at such a high calibre, and proud to be there to celebrate chiropractic.’ —Delegate

DIVERSE RANGE OF PERSPECTIVES
“I appreciated the wide spectrum of speakers and perspectives – I think this was both constructive and instructive,” one anonymous delegate wrote afterward to the steering committee. That doctor was obviously appreciative of the conference’s four tracks, which were entitled: “Embracing our Future through Unity and Leadership,” “Chiropractic in the Global Health-Care Environment,” “Today’s Science and Research of Chiropractic,” and “Case Scenarios – Models of Clinical Excellence.”

When introducing Ethan Zohn, the master of ceremonies joked that Survivor producer Mark Burnett ought to consider filming his reality TV show in Canada. Survivor: Winnipeg, suggested Bronson, could be played out at the corner of Portage and Main in the middle of winter. Zohn, whose Grassroots Soccer program enlists professional soccer players to deliver an HIV/AIDS prevention message to African youth, observed that education can prevent disease.  He said that chiropractors can un-teach and re-educate their patients so that they too can enjoy a healthier life.  “Make a difference for yourself by making a difference for others,” Zohn challenged his chiropractic audience.  Even if you are tired and hungry, and have just spent 13 gruelling weeks in the middle of Africa, stripped down to the bare essentials of who you are.  “See the hope that is born in someone else’s eyes,” said Zohn, “because of something you’ve been able to do for them.”

In his “Changing Chiropractic Identity and Practice in the Era of Evidence-Based Health Care” session, Scott Haldeman, DC, MD, PhD, said that chiropractic is “a profession at the crossroads,” with there having been a modern disconnect between practitioners and leadership, between leadership and scientists, and between scientists and practitioners.

Describing two professional currents – mainstream (focusing on research and outcomes-based clinical practice) and alternative (based on a belief system and traditional clinical practice) – Dr. Haldeman said that it is now viable for chiropractic to become accepted into the mainstream, but he affirmed that “we as a profession should not give up wellness and health prevention.”  He added, “I believe there is the opportunity for chiropractic to become the profession of choice for spinal disorders.” Revealing his personal perception of chiropractic as “a spine care authority and a way of life,” Haldeman emphasized that the world is changing to evidence-based health care, integrating best research evidence with clinical expertise, and that a huge growth in the knowledge base makes it challenging to stay up to date.  The new paradigm empowers the patient to make informed decisions about their care, said Haldeman.

In “Alignment: Chiropractic, the New Science and You,” author of The Biology of Belief, Bruce Lipton, PhD, spoke of the healing field that practitioners can create for their patients.  “Chiropractic philosophy was right from day one,” said Dr. Lipton.  “You throw away the philosophy and you’ve compromised yourself.”  He also said, “If you’re thinking about evidence-based science, at least use the right science to base your medicine on.”

FUTURE CHALLENGES
Facilitated by David Chapman-Smith, secretary-general of the World Federation of Chiropractic, a closing leadership panel presentation with Drs. Gerry Clum, Ian Coulter, Stan Gorchynski, Scott Haldeman, Dennis Richards and Guy Riekeman addressed future challenges. Dr. Coulter expressed his thought that by this time the profession ought to have moved further out of its isolation.  “Your future is now going to be in the hands of the younger generation,” said Coulter.  In a day and age when “patients are crying for someone to hear them,” Dr. Gorchyski said, “we own patient-centred care.”  While every profession wrestles with varying strains of thought, according to Dr. Haldeman, competing approaches can be good.  He expressed concern, however, that many chiropractors are not participating in meetings and organizations, not |keeping up with the journals, and not actively participating in the debate.  Staying abreast of changes is crucial to personal and professional survival, advised Haldeman, and so it is important to “bring the average chiropractor to the table.”

The president of the Chiropractors’ Association of Australia, Dr. Dennis Richards, said of Canada, “There is a very strong heart of chiropractic beating in this place and in this country.” Dr. Guy Riekeman, president of Life University, said it is vital to cultivate respect and tolerance within the profession and “defend the rights of other people who we don’t even agree with.”

In a celebrity testimonial, Rick Hansen, whose foundation has raised millions of dollars to help those who have sustained spinal cord injuries, noted that “when it gets tough, you really have to dig deep inside.”  After a car crash at the age of 15 left him unable to walk, Hansen decided that “life isn’t just about using your legs,” but also about “your heart, your courage and passion.”  A poignant spokesperson, Hansen clearly brought home the message that “your biggest handicap can be your attitude about your circumstance.”

Commenting between sessions, Dr. Don Nixdorf, executive director of the B.C. Chiropractic Association and the College of Chiropractors of B.C., called the conference “a watershed for reawakening chiropractors’ enthusiasm for their profession and the public they serve.”  Chairman of the event’s steering committee Dr. Les Shaw indicated that he and his committee members were “incredibly pleased” with the proceedings. “The positive energy seen throughout the weekend was exceptional,” Shaw said, “and will have significant ramifications for our profession for some time to come.”

Indeed, at the hugely successful “A Taste of Canada” dinner put on by CMCC, that institution’s president Dr. Jean Moss told the crowd, “Let’s not leave it 11 years the next time.”  A sentiment echoed by the CCA’s immediate past president Dr. Grayden Bridge, who intimated, “We need to build on this, and do it again in a couple of years with two to three times as many chiropractors.”•