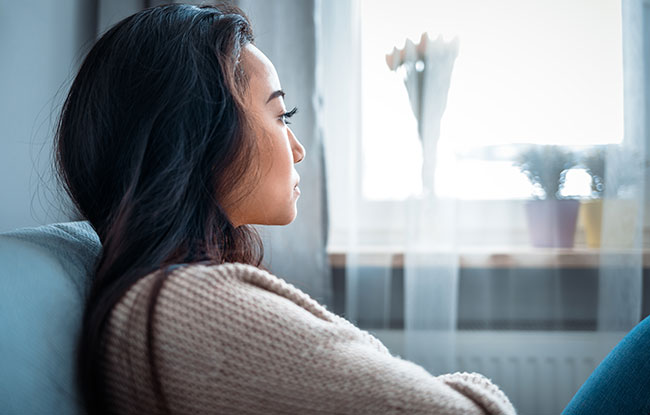 This is the first known study to show that a prenatal social intervention may improve health outcomes in offspring, as measured by autonomic nervous system responses, said Amanda Noroña-Zhou, PhD, first author of the study in Psychosomatic Medicine.

“It is really well established that maternal stress in pregnancy increases the risk for health problems in the children,” said Noroña-Zhou, PhD, a clinical psychologist affiliated with UCSF’s Center for Health and Community. “But we haven’t had a good understanding of how this process unfolds and of the biological mechanisms underlying it, or whether we can buffer the effects of stress on negative health outcomes.”

The researchers studied 135 mother-infant dyads from low-income, racially and ethnically diverse backgrounds who were experiencing high stress in their lives. Infants whose mothers underwent an eight-week mindfulness-based program had a faster cardiovascular recovery from stressful interactions, as well as more self-soothing behavior, than those who didn’t.

An ability to “bounce back” from stress is tied to better health outcomes later in life, said Nicki Bush, PhD, associate professor of psychiatry and pediatrics in the UCSF Weill Institute for Neurosciences and the senior author on the study.

“There has been so little research on what we can do in the positive lane; it’s been mostly about showing the negative effects of prenatal stress,” Bush said. “This is the next frontier — interventions for moms that have positive effects on both mom and baby.”

Quick Recovery from a Stressful Event

The study follows one from 2019 showing the same mindfulness intervention reduced stress and depression in mothers, as well as improved their glucose tolerance and physical activity levels.

To elicit the infants’ stress response, mothers were trained in the “still face paradigm,” whereby the mothers played with their children for two minutes, then held a completely neutral facial expression for two minutes and ignored the babies’ bids for attention. They repeated the play-ignore cycle and ended with two minutes of play.

Using electrodes, the researchers collected measurements of the infants’ autonomic nervous system activity — the fight-or-flight and rest-and-digest responses — during the exercise. Trained observers, who were unaware of treatment status, also coded the infants’ behavior responses.

The fight-or-flight response of babies whose mothers had undergone the mindfulness program was more acute when they were being ignored by their mothers and also receded more quickly after the stressor went away than babies in the control group. The treatment-group babies engaged in more self-soothing behavior, such as sucking their thumbs and looking at their hands, as well.

“A strong reaction and quick recovery are healthy, because we want our bodies to be ready for action when something is wrong, then go back to normal easily,” Bush said. “The babies whose mothers did not receive the intervention had a more delayed response. They didn’t respond strongly until the threat had passed, and then they didn’t calm down easily after the threat was over.”

Support for a Two-Generation Approach

The team intentionally chose mothers for their research who had a high level of stress due to their life situations, including financial strain and health challenges, to ensure the intervention worked for those who might benefit from it the most, said Bush.

“We hope this kind of data can embolden policymakers and advocates to say, hey, this was an inexpensive, group-based intervention that reduced mothers’ depression and stress, and may improve babies’ long-term wellbeing at the same time” Bush said.

Such “two-generation” programs that address caregivers and children at the same time are becoming more popular in California. Last year’s state budget dedicated $800 million to creating a dyadic care benefit for Medi-Cal patients, which will allow caregivers and babies to be treated for behavioral health needs together. Home visiting programs, in which pregnant and new mothers receive visits from early childhood professionals who provide parenting guidance, is up for a proposed $50 million increase in the 2022-23 state budget.

“Pregnancy is an incredible window of opportunity for both mothers and babies,” said Bush. “We could, as a society, save a lot of money while doing the right thing for the next generation.”

Authors: In addition to Drs. Noroña-Zhou and Bush, UCSF co-authors are Michael Coccia, MS, Elissa Epel, PhD, and Nancy E. Adler, from the Department of Psychiatry and Behavioral Sciences, as well as Karen Jones-Mason, JD, PhD. All are affiliated with the Center for Health and Community and Weill Institutes for Neurosciences. Abbey Alkon, PhD, UCSF Department of Health Care Nursing, also co-authored. Additional authors and affiliations can be found in the paper.