Montreal chiropractor André-Marie Gonthier, DC, FICC, has been elected to head the Quebec regulatory body whose mission is to protect the public by ensuring a high quality of care dispensed by the province’s more than 1,100 chiropractors. 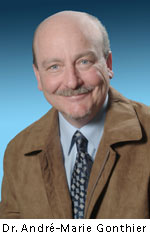 Succeeding the late Dr. Normand Danis, he becomes the sixth president of the Ordre des Chiropraticiens du Québec (OCQ), which was established in 1974 when the National Assembly of Quebec legislated the Chiropractic Act.

Dr. Gonthier predicts challenges and opportunities ahead in the modernization and adaptation of chiropractic law subsequent to the Court of Appeal of Quebec’s reaffirmation of chiropractors’ right to diagnose in 2005. Better communication and partnerships both inside and outside of the profession will also be high on the agenda during his two-year term of office. “I am very optimistic and enthusiastic, and surrounded by a great team of dedicated individuals,” says Gonthier. “The best is ahead for us.”

A member of the founding team that worked to create the first chiropractic program in the French-speaking world at the Université du Québec à Trois-Rivières, Gonthier also served as the program director until 2001, and he continues there as a professor.