Solid results shown in chronic tendinopathies, and for delayed or non-union fractures. 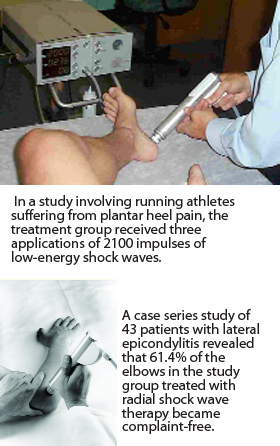 A few years ago, I heard about shock wave therapy that was producing amazing results in chronic conditions such as plantar fasciitis, and Achilles and patellar tendinosis.  Further investigation revealed a number of very good quality scientific papers, which confirmed the effectiveness of this therapy in an average of three sessions.  Following is a brief literature review:

Ogden et al.(1) defines shock wave as, “A transient pressure disturbance that propagates rapidly in three-dimensional space.”  Initially, shock wave was used to break down stones within renal, biliary and salivary gland tracts.(2,3,4)  Over the past 15 years, this procedure has been used for musculoskeletal conditions such as calcific tendinosis of the shoulder,(4,5) tendinopathies,(6,7), and acute and non-union fractures.(8-11)

Wang et al.(4), in their prospective clinical study with two-year follow-up, incorporated 37 patients (39 shoulders) with calcific shoulder tendonitis, who were treated with shock wave therapy (1000 impulses at 14 kV), and observed for 24 to 36 months.  They recruited six patients (six shoulders) into the control group that was treated with dummy electrodes, with average follow-up of six months.  They reported that, in the study group, 60.6% were complaint-free, 30.3% were significantly better, 3.0% were slightly better, and 6.1% were unchanged.  Comparing pre- and post-shock wave therapy shoulder radiographs in the study group, they found total dissolution of calcium deposits in 57.6%, partial in 15.1%, and unchanged in 27.3%.  The control group patients showed 16.7% fragmentation and 83.3% unchanged deposits.  They reported no recurrence of calcium deposits in the study group during the two-year follow-up.

Wang and Chen(6), in their case series study, included 43 patients with lateral epicondylosis in the study group, and six patients in the control group.  The study group patients received 1000 impulses of shock wave therapy at 14 kV to the affected elbow.  The control group patients were treated by a sham procedure.  They used a 100-point scoring system to evaluate strength, pain, function, and elbow range of motion.  Wang and Chen reported that 61.4% of the elbows in the study group were complaint-free, 29.5% were significantly better, 6.8% were slightly better and 2.3% were unchanged.  However, the results were unchanged in all six patients in the control group.

Wang et al.(11) surgically induced bilateral tibial fractures in 10 dogs.  Each fracture was then stabilized by plates and screws.  They eliminated two dogs from the study due to post-surgical deep wound infection.  Each right tibia was treated with 2000 impulses of 14 kV, and the left tibias were used as the control.  Upon evaluation of callus formations utilizing serial radiographic examinations at 1, 4, 8, and 12 weeks, and histological examination at 12 weeks, the authors found statistically significant callus formation in the treated group only at 12 weeks.  They concluded that the effect of shock wave therapy on bone healing might be time-dependent at three months.

There is obviously good evidence for the effectiveness of shock wave therapy in chronic tendinopathies, and for delayed or non-union fractures.

The literature suggests total resolution of symptoms in the majority of patients with three sessions of five to ten minutes.  Marked pain relief may be observed in most patients just eight to ten days after the first treatment.

Since they treat neuromusculoskeletal injuries, chiropractors are well-placed for use of this modality.•