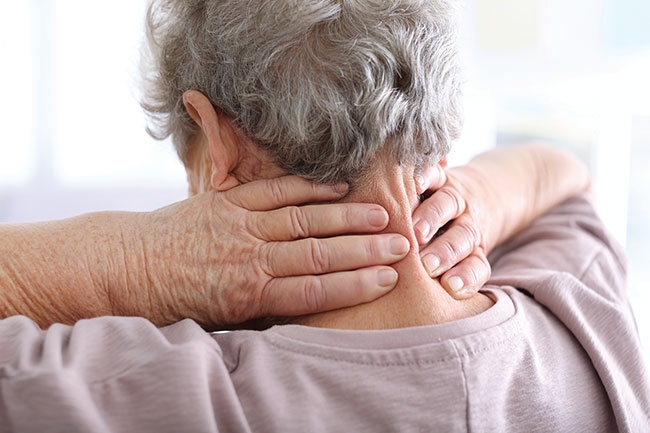 The cervical spine is a critical contributor to the overall sensorimotor system that governs movement and balance.

Background information
The cervical spine is a critical contributor to the overall sensorimotor system that governs movement and balance. This system relies on the ability of cervical mechanoreceptors to integrate multisensory input from the visual, vestibular, proprioceptive and central nervous systems. Patients with neck pain have demonstrated sensorimotor disturbances, often manifesting as impaired postural stability (1). Older patients similarly have poorer dynamic postural stability, which increases the risk of injury due to fall (2). Those who are older and also have neck pain may theoretically be vulnerable via two distinct, yet perhaps related, mechanisms.

This is a complex topic that has not yet been extensively studied. The purpose of this cross-sectional, exploratory study was to understand the mechanisms associated with postural control deficits in older adults with or without neck pain.

Applications, conclusions
The results of this cross-sectional, exploratory study suggest that postural control deficits in older patients with neck pain may not be associated with variables such as physical activity level, lower limb motor or sensory function, vestibular function and visual contrast sensitivity. Rather, impairments to cervical proprioceptive inputs (likely related to their neck pain) are most likely responsible for change in postural activity in this cohort. The authors suggest that further research is necessary to determine the relationship between the observed reduced balance confidence, poorer dynamic balance and higher fall risk in older patients with neck pain. Clinicians should be aware of these concerns when treating such patients.

COMMENT: Unraveling the complex relationship among balance, postural stability, aging and neck pain is a challenging proposition that requires further research. This study adds to our existing body of knowledge and should stimulate clinicians to investigate for these deficiencies in your older patients with neck (or low back?) pain. Simple balance exercises and progressions could form a standard component of treatment provided in addition to manual and other therapies for our older patients, in an effort to preserve and enhance their postural stability and general balance.

Study methods
This was a cross-sectional, exploratory study conducted on older adults who were recruited via convenience sampling. Participants were added to the neck pain (NP) group if they had chronic NP for ≥ 3 months, a Neck Disability Index (NDI) score of ≥ 10 per cent and neck-related pain of ≥ 2/10 on a Visual Analogue Scale (VAS).

Vestibular function tests: Participants were screened for vestibular hypofunction via a Dynamic Visual Acuity (DVA) test with a Snellen chart and the head impulse test (HIT) (this combination has been previously validated). Active Benign Paroxysmal Positional Vertigo (BPPV) was screened for via the Dix-Hallpike manoeuvre.