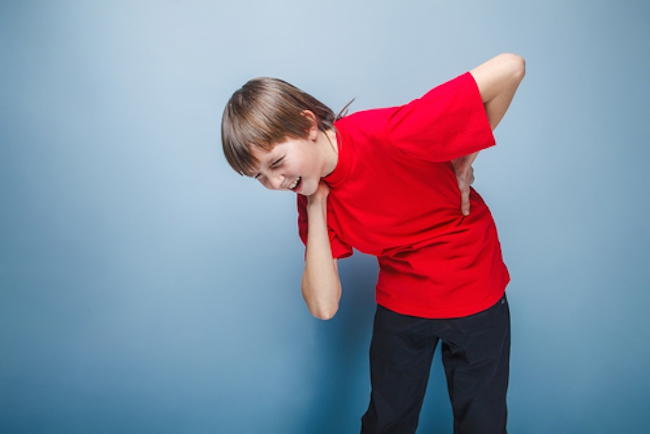 Back pain in adolescents is most prevalent between ages 13 and 15 and can vary between seven and 58 per cent, with an equal distribution between genders.

Assessing and treating back pain in younger patients has inherent difficulties, from dealing with a distressed or uncooperative child/toddler to their occasional inability to localize pain.

Spondylolysis and spondylolisthesis
Spondylolysis is a defect in the pars interarticularis (normally a stress or fatigue fracture). It most commonly occurs between L4 and L5. Spondylolisthesis, on the other hand, refers to a bilateral pars defect accompanied by anterior movement of the affected vertebrae on the next caudal segment. Together, these two are the most common serious causes of back pain in children over the age of 10.

These injuries are more common in boys and those engaged in sports that involve repetitive extension, flexion and rotation. Diagnosis is made through imaging with plain films and CT scanning. Treatment generally begins with rest and avoidance of aggravating activities. It can also include non-steroidal anti-inflammatory medication, bracing and physiotherapy, which emphasizes hamstring stretching and core strengthening. Evidence pertaining to manual therapy in patients with these conditions is sparse at this time. Surgery is reserved only for patients who do not respond to conservative management.

Lumbar intervertebral disc prolapse
This is exceedingly rare in children and adolescents. Disc injuries in children also present clinically in a very different manner than adults, with 30 to 60 per cent of childhood disc injuries resulting from trauma or sport-related injury.

Clinical presentation is predominantly tightness of the dorsolumbar fascia and the hamstrings, with minimal back pain and often with no associated sciatica. Thoracolumbar scoliosis often accompanies this injury. Childhood disc injuries often remain contained within the annulus and are not associated with neurological symptoms, due to the relative resiliency of the neurologic tissue in this age group.

Adolescents do not respond to non-surgical treatment as well as their adult counterparts, but respond well to surgical correction once the disc is actually prolapsed.

Apophyseal ring fracture
The junction between the vertebral endplate and intervertebral disc is relatively weak in adolescents. As a result, trauma can cause prolapse of the disc and fracture or fragmentation of the ring apophysis. Symptoms tend to mimic those of adolescent disc injury and occurs more often in males. Diagnosis is made through imaging. Non-operative treatment is often sufficient (the authors did not specify, but we assume that refers to rest, pain control and appropriate manual therapy or rehabilitaiton).

Treatment traditionally includes anti-inflammatory medication and physiotherapy, with strengthening exercises. Bracing is an option for skeletally immature patients with severe or progressive curves, but the type of brace to utilize and overall efficacy remains controversial. Surgery is reserved for extreme cases where skeletally mature patients exhibit a curve of greater than 70 degrees with pain and concerns about appearance.

More causes and treatment of back pain in children in the next issue.

Dr. Shawn Thistle is the founder and CEO of RRS Education (rrseducation.com), which helps busy clinicians integrate current research evidence rationally into practice. He also maintains a practice in Toronto, lectures at CMCC and provides chiropractic medicolegal consulting services. Reach him at: shawn@rrseducation.com