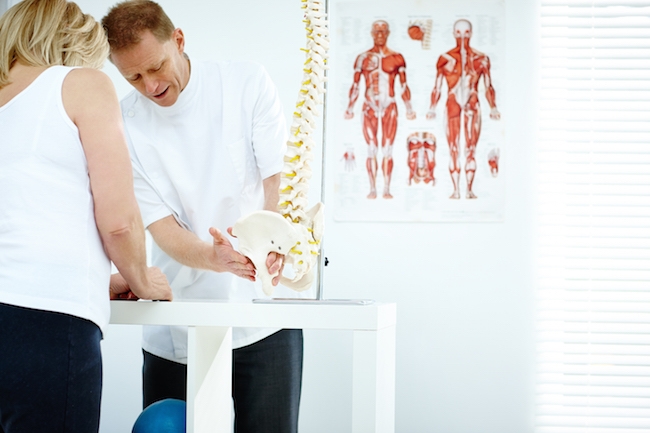 Chronic pelvic pain (CPP) is characterized by episodic or constant pain in the pelvic region lasting more than six months.

Chronic pelvic pain (CPP) is characterized by episodic or constant pain in the pelvic region lasting more than six months. The condition in generally nonspecific, but is estimated to affect 25 per cent of fertile women and 10 to 16 per cent of men. Causes of CPP include pregnancy, gastrointestinal, urinary, gynaecological, neurologic, and musculoskeletal (MSK) conditions. No effective treatments have been found and the role of the musculoskeletal system in CPP is poorly understood.

The purpose of this study was to determine the prevalence of MSK dysfunction in patients with CPP based on a standardized clinical examination.

Participants were recruited from the endometriosis referral center at the Department of Gynecology at the Aarhus University Hospital in Skejby, Denmark between January, 2007 and January, 2010 based on the following inclusion criteria: women aged 18 to 50; referred to the Aarhus University Hospital for lapraroscopic investigation on suspicion of endometriosis; able to speak, read, and understand Danish.

Results
Out of 94 patients who completed the study, 48 patients (51 per cent of the sample) were classified as having MSK dysfunctions in the lumbar/pelvic region. Both groups showed similar demographics with the only significant difference being noted in self-rated health status, with only 27 per cent of the group with MSK dysfunction rating themselves as excellent or very good compared to 50 per cent of the non-MSK dysfunction group. It was also noted that patients in the MSK dysfunction group tended to report more pain in the anterior and posterior lower limbs. It is possible that referred pain from the muscles, hips, pelvis or lumbar spinal joints may be responsible for these symptoms.

Significant differences between groups were seen in most of the clinical tests. No differences were observed for the Gaenslen’s test, the modified Schober 15 index, and lumbar rotation both left and right. The authors conclude that this allows us to potentially identify a subgroup of patients with MSK dysfunction that may comprise as much as half of all patients with CPP. This could help to explain why some patients have continued pain even when no endometriosis is found on subsequent laparoscopy, or why some patients show recurrent pain after surgical treatment for endometriosis. As a result, manual therapy targeting MSK dysfunction in patients with CPP should be further investigated. SI joint dysfunction was particularly high in the MSK dysfunction group, so may be a relevant area of focus for treatment, especially as SI joint dysfunction is often recognized as causing pain in the posterior pelvis with radiating pain into the lower limbs.

Similar patterns of pain were seen between the two groups with respect to pain levels changing along with the stage of the menstrual cycle. This indicates that MSK problems may be a comorbidity or secondary to hormonal or gynaecological disorders. If the MSK dysfunctions were the main pain generators, we would expect to see more stable pain levels in the MSK dysfunction group throughout their menstrual cycles, however, this does not mean that these patients wouldn’t still benefit from treatment aimed at their MSK dysfunction.

Clinical application, conclusions
Fifty-one per cent of studied patients with CPP were classified as having MSK dysfunction and these patients tended to report more pain in the anterior and posterior lower limbs. This could allow for the identification of a subgroup of CPP patients who would benefit from treatment aimed toward MSK dysfunction, opening the door for manual therapists, including chiropractors, physiotherapists, registered massage therapists, etc. to play a significant role in the treatment of CPP. As there is currently no known effective treatment for CPP as a whole, this could be of vital importance to this patient group.