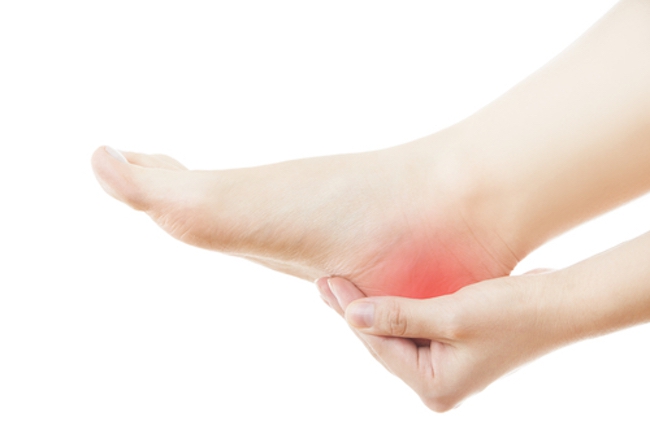 Background
Plantar fasciitis (PF) is the most common cause of heel pain and is characterized by pain at the calcaneal origin of the plantar fascia, often accompanied by thickening of the fascia itself. While the histology of PF is poorly understood, it is known that degenerative changes at the plantar fascia enthesis contribute to pain and dysfunction.

Pertinent results
At the primary endpoint at three months, the strength group had a foot function index (FFI) that was 29 points lower compared with the stretch group. This exceeds the seven-point difference required to signify a clinically important difference. Non-significant differences were noted at one, six and 12 months. At 12 months, there was a trend towards improved status in the stretch group versus the strength group.

Methods
This study was a randomized, controlled trial conducted at two hospitals and one private clinic in northern Denmark. Patients were recruited between 2009 and 2012.

Forty-eight patients with ultrasonically confirmed plantar fasciitis were block randomized to receive shoe inserts and either daily plantar-specific stretching or high-load strength training every other day.

The principal investigator met with all treating and assessing clinicians before trial began to ensure consistency of diagnosis, intervention and information delivered to patients. Participants were assessed at baseline by a rheumatologist or orthopaedic surgeon and subsequently referred to a physiotherapist. Patients were re-assessed at one month by the same physician, who performed ultrasonographic measurement of the thickness of the plantar fascia.

Both groups received a short patient information sheet regarding pain management, modification of physical activity and return to sports, as well as gel heel inserts.

The plantar-specific stretching group was required to sit crossing the affected leg over the contralateral leg. Then, while using the hand on the affected side, they were instructed to place the fingers across the base of the toes on the bottom of the foot (distal to the metatarsophalangeal joints) and pull the toes back toward the shin until they felt a stretch in the arch of the foot. Patients were instructed to palpate the plantar fascia during stretching to ensure tension in the structure. Patients performed the stretch 10 times, holding for 10 seconds, three times per day.

The high-load strength-training group engaged in unilateral heel raises with a towel inserted under the toes. Patients performed the stretch on a stairway or similar location. They performed the exercises every second day for three months. Each heel raise consisted of a three-second concentric phase (going up) and a three-second eccentric phase (coming down) with a two-second isometric phase (pause at the top of the exercise). Exercises began at a 12-repetition maximum for three sets. After four weeks, it progressed to five sets of  eight repetitions. A backpack with books was added at two weeks and the load in the backpack was increased over the course of the trial.

Conclusions, applications
Clinical improvement was noted at three months in patients with plantar fasciitis who completed a short, high-load strength-training program when compared with a stretching program. No significant difference was noted at six or 12 months.

While a strengthening program such as this may be of benefit to patients suffering from plantar fasciitis, the lack of a lasting effect indicates the need for further research. In combination with manual and/or modality treatments, incorporating a high-load strengthening program may prove to be a valuable addition to a treatment plan for plantar fasciitis, a condition that remains challenging to manage clinically.

Dr. Shawn Thistle is the founder and CEO of RRS Education (rrseducation.com), which helps busy clinicians integrate current research evidence rationally into practice. He also maintains a practice in Toronto, lectures at CMCC and provides chiropractic medicolegal consulting services. Reach him at: shawn@rrseducation.com