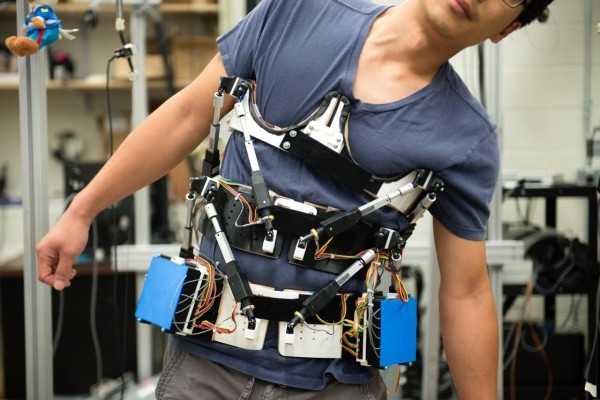 Some six million people in the U.S. suffer from scoliosis, a sideways curvature of the spine. These include approximately two to three per cent of adolescents who are diagnosed each year with idiopathic scoliosis, which is usually identified during puberty and progresses until skeletal maturity. One in 500 children today require treatment using spine braces and one in 5,000 need spinal surgery.

The typical spine brace is made of rigid plastic that fits around the child’s trunk and hips and applies counter-pressure on the spine’s abnormal curve, on the theory that pressure and support on the curve from outside will stimulate more normal growth of the spine.

The rigid braces have several shortcomings: they “freeze” the child’s upper body and limit movement to such an extent that users often avoid wearing the brace. And as the child grows, the required external forces to correct the abnormal posture change along the length of the curve and over the course of treatment. Having the flexibility to move when wearing a spinal brace while still applying corrective forces would be a very useful feature for both patients and physicians.

Sunil Agrawal, professor of mechanical engineering and of rehabilitation and regenerative medicine at Columbia Engineering, is working on solving the problem. He and his collaborators – David P. Roye, St. Giles Foundation Professor of Pediatric Orthopedic Surgery at the Columbia University Medical Center (CUMC), and Charles Kim, professor of mechanical engineering at Bucknell University – are developing a dynamic spine brace that is more flexible than the rigid braces now in use. Their work is so promising that they have just won a $1 million grant from the National Science Foundation’s National Robotics Initiative.

“Every year, 30,000 children use a rigid brace to treat scoliosis, while 38,000 patients undergo spinal fusion surgery, so this award will make a big difference,” Agrawal says. “If we can design a flexible brace that modulates the corrective forces on the spine in desired directions while still allowing the users to perform typical everyday activities, we will bring revolutionary change to the field.”

Agrawal and his team have already developed prototype wearable spine braces that consist of rings that fit on the human torso. These rings are dynamically actuated by servomotors placed on adjacent rings to control the force or position applied on the human body. Onboard sensors record the force and motion data and transmit the information to a host computer for monitoring and adjusting the treatment. The team has also developed a second brace that is fully passive, made of compliant components able to adjust stiffness in specific directions. However, both these braces have drawbacks. The dynamic brace needs an active power source while the passive brace cannot provide active controls.

“While we are the first group to propose parallel-actuated spine braces and compliant braces, these are just in initial phases,” Agrawal explains. “What we will do, thanks to the NSF award, is to design hybrid semi-active spine braces that combine the merits of the two. These will be less power hungry and can be worn over a longer duration of time.”

The team, which has drawn together experts in robotics and pediatric orthopedics, plans to test all three types of braces on children with scoliosis at CUMC.

“Scoliosis impacts the quality of life of those affected, limiting their activity, causing pain, and diminishing their self-esteem,” Agrawal adds. “We expect our work will transform treatment due to the ability of the brace to modulate force or position at specific locations of the spine and will greatly improve the quality of life for children with this debilitating condition.”