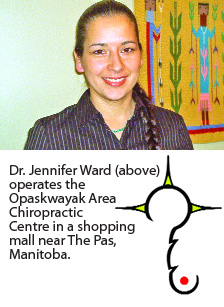 Upon walking through the doors of Dr. Jennifer Ward’s chiropractic clinic, you sense the synthesis of her profession with her culture.  Integration has been a common denominator in her practice, in her choice of career and in her approach to everyday life.

The logo for the Opaskwayak Area Chiropractic Centre, encountered at the entrance, symbolizes a vertebra with the spinous process and two transverse processes.  The three levels of the spine – cervical, thoracic and lumbar – are incorporated into the bottom section, and the red dot stands for the nervous system.  From the perspective of an Aboriginal person, the top represents the circle of creation and the rising sun in the east, and the eagle feather in the bottom honours the teachings that the eagle provides.  The four sacred colours of the Aboriginal people – red, white, black and yellow – are of fundamental significance.

As a young, Mi’kmaq woman, Dr. Ward ventured from her roots on the East Coast to the beauty of the North.  She has practised on the Opaskwayak Cree Nation Reserve near The Pas, Manitoba, for the past three years.  As the wife of a Cree man and the mother of three children, she has made this place her home.  The province’s capital, Winnipeg, is approximately 600 kilometres to the south.

Ward also operates a satellite clinic on the Pukatawagan Cree Reserve 400 kilometres further north, which she attends every two weeks.  A one-hour flight on the Pukatawagan band’s private aircraft takes her to the remote community.  Once there, she treats patients for three days, working alongside medical staff in the nursing station.

Growing up on the small reserve of Eel Ground First Nation in New Brunswick, Ward understood early on that it takes an entire community to raise a child.  At every stage in her education, she says she felt strongly supported by her family and community.

Upon graduating with a bachelor of science degree from Mount Allison University in Sackville, New Brunswick, she was accepted at the Canadian Memorial Chiropractic College (CMCC) in Toronto, Ontario, graduating in 2003.

Chiropractic synchronizes with the overall view of health held in Ward’s native culture, which recognizes the body’s inherent healing ability as well as the necessity for balance in all capacities.

In her practice, Ward focuses on the whole person, encouraging patients to take control of their own health care in the creation of a plan of management that leads to wellness.  Components might include regular stretching and strengthening exercises, participating in a walking program such as the one she helped organize for elders in Pukatawagan, and healthy eating choices.  Her multidisciplinary approach includes the chiropractic adjustment, acupuncture, therapeutic modalities, soft tissue therapy, exercise and rehabilitative therapy and nutritional management.  At her Opaskwayak Cree Nation main clinic, she services both an Aboriginal and non-Aboriginal clientele, thereby playing a role in bringing the communities together.

Future goals involve a broad range of health-care interventions and fitness programming.  Patients would thus be able to access a variety of services that nourish mind, body and spirit.  Ward thinks the North is ready for this type of facility.•