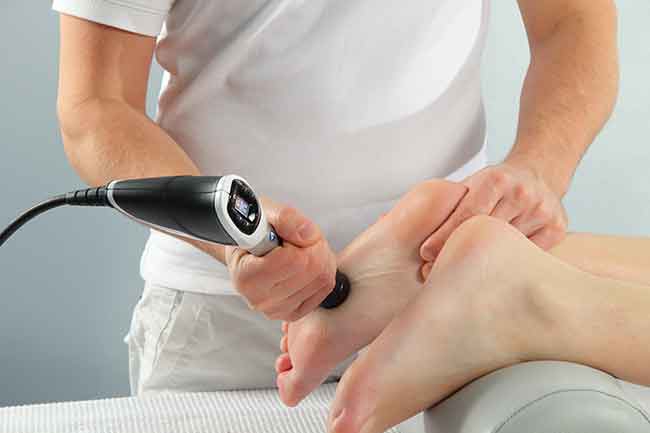 Shock wave therapy (SWT) has been used in Canada for more than two decades. It is taught and has been part of the curriculum at the Canadian Memorial Chiropractic College (CMCC) for almost ten years. It has been so progressive and intuitive that the CMCC and other leading institutions such as McGill, Queens and Cleveland Clinic have instituted a multidisciplinary approach to incorporating SWT into their curriculum and treatment of multiple musculoskeletal conditions.

Fortunately with more education and awareness, less health-care professionals are using unproven techniques for tendinopathies and other musculoskeletal disorders. Traditional methods such as ultrasound, ice and laser have not been shown to be better than placebo for most tendinopathies. (Cochran Systematic Reviews 2010)

SWT has gained popularity as an alternative to surgical intervention in the treatment of injuries in the field of sports medicine and soft tissue conditions, such as trigger points. It is particularly useful for injuries of overuse and for cases refractory to non-operative treatment.

There have been a plethora of level 1A studies showing shockwave therapy’s efficacy. In a landmark article published by Gerdesmeyer in the American Journal of Sports Medicine, radial shockwave therapy demonstrated a significant reduction of pain on a visual analogue score of 72 per cent and 84 per cent success at one year. The conclusion was that radial shockwave therapy significantly improved pain, function and quality of life compared to placebo in patients with recalcitrant calcific tendonitis. In clinical orthopaedic and related research (Corr 471 (11) 3645-52 2013) Dr. Aqil’s conclusion of the latest meta analysis showed that shockwave therapy is a safe and effective treatment of chronic plantar fasciitis refractory to non-operative treatment. They recommended SWT for the treatment of substantial heel pain.

Shockwave therapy has evolved dramatically since the guidelines were developed and Swiss-made machines are more efficient, effective and extremely cost-effective. There is a great opportunity to successfully treat patients at lower costs and higher efficiency than “conventional treatments.”

Shockwave therapy has also been shown to be effective to treat symptoms of calcific rotator cuff tendinopathy with a 70 per cent elimination of the calcification. The study also showed that functional and pain scores significantly improved after shockwave therapy with high rates of symptom relief. (Kim. Journal of Shoulder and Elbow Surgery 2014, 23, 1640)

A study by Dr. Rompe (American Journal of Sports Medicine, 35, 3, 2007, page 374) showed that 75 per cent of patients who are treated with SWT have significant improvement for their Achilles tendinopathy in conjunction with eccentric loading exercises.

Shockwave therapy has been proven to be incredibly successful for the treatment of chronic proximal hamstring, tendinopathy in professional athletes, whereby SWT was eight times more effective than traditional methods. (CACCHIO, American Journal of Sports Med 2011, 39: 146)

Technology and cost
SWT has evolved over the years. The original machines have improved from being high-energy, focused devices weighing 200 kg at a cost of $400,000 to radial shockwave devices (produced by air compression) that now cost approximately $10,000 and are as small as a microwave. The originator and most established companies are from Switzerland.

Treatments for tendinopathies are very cost effective and affordable. Most treatments last four minutes and most patients only require three treatments, each one week apart (according to published protocols). At four minutes a treatment, that helps clinicians see and heal more patients. There may have been some abuse by practitioners treating more than four times, which is certainly not proven in the literature. Soft tissue treatments for fascia, muscles and trigger points last two to five minutes with multiple sites being able to be treated at one sitting.

SWT works by creating neovascularization in the affected tissue. Tissue such as the plantar fascia is affected by hyaline degeneration within the tissue (this is not an inflammatory process). Dr. Wang, in his studies, has shown that nitrous oxide, endothelial growth factor is produced intracellularly and helps regenerate the affected tissue. Relief of pain may be immediate and the healing process may take from three to six months to regenerate. It is important to communicate this timeline with your patient as expectations and outcomes must be realistically conveyed. Fascia and trigger point pain relief can be immediate.

SWT can be used in synergy as well for many conditions, whether it is acupuncture, active release, eccentric loading exercises or whatever the practising doctor decides.

A shockwave therapy machine can be leased or purchased. There are numerous accessories that are now available with the basic machine such as special spine heads to relieve paraspinal muscle pain, numerous other heads such as special fascial heads and other heads that can be used for needleless acupuncture, TMJ pain, and other innovative uses. There is also a combination of vibration and shockwave handpieces that have been shown to be very effective in the pain relief of trigger points, swelling, and peripheral edema.

There are more than 1,000 clinics in Canada using the device now and chiropractic doctors have found it very advantageous. They have also found that using SWT may promote practice longevity because it saves their hands, elbows and back by using the device.

In conclusion, numerous studies have shown that shockwave therapy is the standard of care for numerous conditions, and the use of such a device by practitioners should not be so shocking anymore.

Dr. Robert Gordon is an orthopaedic surgeon specializing in knee surgery. He is on staff at the University Health Network at the University of Toronto and at William Osler Health Centre. He is the past president of the International Society for Medical Shockwave Treatment. Gordon helped introduce shockwave therapy to Canada and has lectured at numerous institutions and conferences. He has published papers on shockwave therapy and has been treating patients for almost 20 years with shockwave.
Print this page

Related
The Results of Radial Shockwave Therapy
4 reasons why you should integrate shockwave therapy into your practice
Radial Shock Wave Therapy for Pain Relief and Healing
Research calls for conservative treatments before painkillers: ACA