Among the many causes of joint pain, microbial imbalance along the digestive tract should not be overlooked 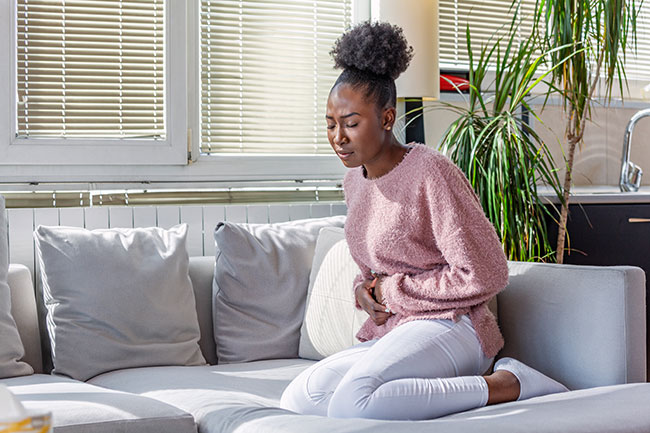 SIBO is the accumulation of bacteria in the small intestine and is the most common cause of irritable bowel syndrome (IBS). Photo: Graphicroyalty/Adobe Stock

Small intestinal bacterial overgrowth (SIBO) is a rare but possible example of a digestive origin. While digestive symptoms are an obvious presentation, some people also present with extra-intestinal symptoms resulting from impaired nutrient absorption and systemic inflammatory processes.

SIBO is the accumulation of bacteria in the small intestine and is the most common cause of irritable bowel syndrome (IBS). There should be low amounts of bacteria present in this section of your gastrointestinal tract (GIT). With the help of stomach acid, digestive enzymes and peristaltic muscle movements, the small intestine is where food is broken down and nutrients are absorbed. Yet in the presence of SIBO, ingested food is fermented by the bacteria creating methane or hydrogen gases (depending on the microbial overgrowth present). This leads to altered bowel function and the following possible symptoms:

Of course all these symptoms can have a number of possible causes and a thorough work up is required to diagnose and direct treatments. Diagnostic testing for SIBO is non-invasive using a hydrogen-methane lactulose breath test kit that patients can do from home. This test maps out the amount, location, as well as the type of microbial imbalance in this section of the intestine.

What Causes SIBO?
The GIT has mechanisms in place to ensure proper function and reduction of bacterial overgrowth. One mechanism is an intestinal ‘sweep’ known as the migrating motor complex (MMC), which occurs while fasting every 90-120 minutes to move bacteria and waste into the large intestine.1 This motion is separate from regular peristaltic contractions. Disruption of the MMC is one of the underlying causes of SIBO and restoring its function is an important part of the treatment.2 Additional risk factors and underlying causes of SIBO may include:

Joint pain as a result of SIBO may be due to elevated histamine or bacterial-triggered inflammation.
Histamine is an immune chemical mediator known for its role in allergies, asthma and atopic dermatitis (eczema). Because of its widespread actions in the body, other systemic symptoms may include joint pain and swelling, anxiety, headaches, tachycardia/hypotension, insomnia and gastrointestinal symptoms.

It also has a role in pain generation.3 In the case of SIBO, the small intestinal inflammation can cause issues with diamine oxidase (DAO), the enzyme responsible for histamine breakdown. Though this is not seen in every case, histamine intolerance is important to consider when allergic or other systemic inflammatory symptoms arise.

Joint pain may also stem from microbial imbalance and compromised gut barrier function in the small and large intestine. An overgrowth of gram negative bacteria can release lipopolysaccharide (LPS), a very inflammatory component of their outer membranes.  The local and systemic inflammatory response stimulated by LPS can cause and perpetuate compromised gut barrier integrity and lead to systemic symptoms including joint pain.4 Studies linking fibromyalgia and the presence of SIBO suggest microbial endotoxin production can lead to alterations in somatic pain tolerance and systemic inflammation.5,6

Treatment options
SIBO can be difficult to treat and requires a multistep protocol, beginning with a two-week antimicrobial phase to kill the bacteria, followed by treatments aimed at restoring MMC and digestive function. Antimicrobial choice depends on the type and amount of microbes present (confirmed with testing) and discussion with patients regarding options for pharmaceutical antibiotic or herbal antimicrobials. Rifaximin is an example of an antibiotic that is effective for treating hydrogen overgrowth as it stays local to the small intestine.7 Examples of herbal antimicrobials include garlic, berberine, thyme and/or oregano, again chosen based on type of microbes present (methane vs hydrogen).

The second phase of treatment includes choice of herbs or prescription prokinetics that function to restore the activity of the MMC and prolong remission of SIBO. Additional supportive measures should be taken based on each individual’s case, such as replenishing nutrient deficiencies, dietary guidance and correcting any existing underlying root causes or risk factors.

Taken together, if joint pain and gastrointestinal symptoms present together in a case, SIBO should be on the list of possible diagnosis. With appropriate screening, testing and treatments, it can effectively reduce inflammation, pain and digestive dysfunction.

6.  Pimentel M, Wallace D, Hallegua D, et al. 2004. A link between irritable bowel syndrome and fibromyalgia may be related to findings on lactulose breath testing Annals of the Rheumatic Diseases;63:450-452.

DR. WHITNEY BAXTER is a naturopathic doctor in Victoria, BC. Prior to becoming a naturopathic doctor, she worked as an exercise physiologist in cardiac rehab. It was here that she witnessed the value of a holistic approach to health care and understood that each individual’s physical, mental, and emotional health are interconnected. She has a general practice and enjoys working with mental wellness, digestive health and cardiovascular disease management and prevention.